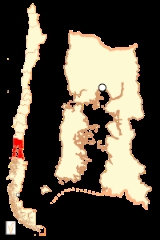 Its capital is Puerto Montt; other important cities include Osorno
Osorno, Chile
Osorno is a city and commune in southern Chile and capital of Osorno Province in the Los Lagos Region. It had a population of 145,475, as of the 2002 census...
, Castro
Castro, Chile
Castro is a city and commune in the Chilean island of Chiloé Island. Castro is the capital of the Chiloé Province in the Los Lagos Region. It is Chile's third oldest city in continued existence...
, Ancud, and Puerto Varas. Also visit Archaeological site of Monte Verde
Monte Verde
Monte Verde is an archaeological site in southern Chile, located in the northern Patagonia near Puerto Montt, Chile, which has been dated to 14,800 years BP . This dating adds to the evidence showing that settlement in the Americas pre-dates the Clovis culture by roughly 1000 years...
. The mainland portion of Los Lagos Region south of Reloncaví Sound
Reloncaví Sound
Reloncaví Sound or Seno de Reloncaví is a body of water located immediately south of Puerto Montt, Chile. It is the place where the Intermediate Depression falls into the Pacific Ocean. There are several islands in the sound including Tenglo Island, Maillén Island and Huar Island...
(Palena Province) is considered part of Patagonia
Patagonia
Patagonia is a region located in Argentina and Chile, integrating the southernmost section of the Andes mountains to the southwest towards the Pacific ocean and from the east of the cordillera to the valleys it follows south through Colorado River towards Carmen de Patagones in the Atlantic Ocean...
.

Los Lagos Region economy is dominated by the service sector but based in fishing
Fishing in Chile
Fishing in Chile is a major industry with a total catch of 4,442,877 tons of fishes in 2006. Due to the Humboldt Current the Chilean Sea is considered among the most productive marine ecosystems in the world as well as the largest upwelling system. Artisan fishing is practised all over Chile's...
, salmon aquaculture
Aquaculture in Chile
Aquaculture is a major economical activity in Chile. Among the diverse aquacultures practised in Chile Atlantic salmon aquaculture is the overwhemingly largest sector. Until 2007 Chile experienced over 15 years a huge growth in its salmon aquaculture becoming the second largest salmon and trout...
, forestry
Forestry in Chile
Forestry is one of the main economic sectors of Chile, representing 13% of the value of the country's total exports. This places the forestry sector in Chile as the second largest export sector behind copper mining. From 1970 to 2005 planted forest surface in Chile grew from 300,000 ha to more than...
and cattle
Cattle
Cattle are the most common type of large domesticated ungulates. They are a prominent modern member of the subfamily Bovinae, are the most widespread species of the genus Bos, and are most commonly classified collectively as Bos primigenius...
farming. Tourism is economically important in Andes
Andes
The Andes is the world's longest continental mountain range. It is a continual range of highlands along the western coast of South America. This range is about long, about to wide , and of an average height of about .Along its length, the Andes is split into several ranges, which are separated...
where ski resort
Ski resort
A ski resort is a resort developed for skiing and other winter sports. In Europe a ski resort is a town or village in a ski area - a mountainous area, where there are ski trails and supporting services such as hotels and other accommodation, restaurants, equipment rental and a ski lift system...
s, hot spring
Hot spring
A hot spring is a spring that is produced by the emergence of geothermally heated groundwater from the Earth's crust. There are geothermal hot springs in many locations all over the crust of the earth.-Definitions:...
s and recreational fishing
Recreational fishing
Recreational fishing, also called sport fishing, is fishing for pleasure or competition. It can be contrasted with commercial fishing, which is fishing for profit, or subsistence fishing, which is fishing for survival....
are popular offers.

The region is bordered on the north by Los Ríos Region
Los Ríos Region
The XIV Los Ríos Region is one of Chile's 15 first order administrative divisions. Its capital is Valdivia. Pop. 356,396 . It began to operate as region on October 2, 2007. It was created by subdividing the Los Lagos Region in southern Chile...
, on the south by Aisén Region, on the west by the Pacific Ocean
Pacific Ocean
The Pacific Ocean is the largest of the Earth's oceanic divisions. It extends from the Arctic in the north to the Southern Ocean in the south, bounded by Asia and Australia in the west, and the Americas in the east.At 165.2 million square kilometres in area, this largest division of the World...
and on the east by Argentina
Argentina
Argentina , officially the Argentine Republic , is the second largest country in South America by land area, after Brazil. It is constituted as a federation of 23 provinces and an autonomous city, Buenos Aires...
(provinces of Neuquén
Neuquén Province
Neuquén is a province of Argentina, located in the west of the country, at the northern end of Patagonia. It borders Mendoza Province to the north, Rio Negro Province to the southeast, and Chile to the west...
, Río Negro
Río Negro Province
Río Negro is a province of Argentina, located at the northern edge of Patagonia. Neighboring provinces are from the south clockwise Chubut, Neuquén, Mendoza, La Pampa and Buenos Aires. To the east lies the Atlantic Ocean.Its capital is Viedma...
and Chubut
Chubut Province
Chubut a province in the southern part of Argentina situated between the 42nd parallel south and the 46th parallel south , the Andes range separating Argentina from Chile, and the Atlantic ocean...
).

The regional economy is dominated by agriculture, forestry and fisheries, all of which have become increasingly industrialized.
The livestock sector emphasizes the breeding of dairy cattle. Seafood, including salmon, is sold fresh or canned. Cereals are grown extensively. Tourism has grown considerably in the past few decades.

El Tepual Airport
El Tepual Airport
El Tepual International Airport is a commercial and private aviation facility which serves the touristic area of Puerto Montt, Chile.-History:...
lies a few miles west of Puerto Montt
Puerto Montt
Puerto Montt is a port city and commune in southern Chile, located at the northern end of the Reloncaví Sound in the Llanquihue Province, Los Lagos Region. The commune spans an area of and had a population of 175,938 in 2002. It is located 1,055 km to the south of the capital, Santiago...
and Cañal Bajo Carlos Hott Siebert Airport
Canal Bajo Carlos Hott Siebert Airport
Cañal Bajo Carlos Hott Siebert Airport is an airport located east of Osorno, a city in the Los Lagos Region of Chile.-Airlines and destinations:-External links:* at Aerodromo.cl...
a few miles east of Osorno
Osorno, Chile
Osorno is a city and commune in southern Chile and capital of Osorno Province in the Los Lagos Region. It had a population of 145,475, as of the 2002 census...
. Also east of Osorno, the Cardenal Antonio Samoré Pass
Cardenal Antonio Samoré Pass
Cardenal Antonio Samoré Pass it is one of the main mountain pass through the southern Andes along the border between Argentina and Chile.Together with Paso Libertadores, it is one of the easiest of the Argentina-Chile passes, and one of the few with asphalted roads in the region...
is a major mountain pass
Mountain pass
A mountain pass is a route through a mountain range or over a ridge. If following the lowest possible route, a pass is locally the highest point on that route...
across the Andes
Andes
The Andes is the world's longest continental mountain range. It is a continual range of highlands along the western coast of South America. This range is about long, about to wide , and of an average height of about .Along its length, the Andes is split into several ranges, which are separated...
to Argentina via Route 215
Route 215-CH
thumb|250px|right|Image of Route 215-CH between [[Puyehue Lake]] and [[Golgol River|Golgol Valley]]Route 215-CH is a branch line road going eastward from Osorno at Chile Highway 5 to Cardenal Antonio Samoré Pass at the border to Argentina...
.