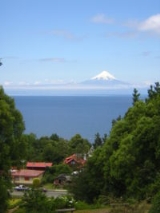 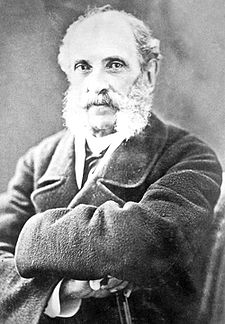 Frutillar is a city and commune located in southern Chile
Chile
Chile ,officially the Republic of Chile , is a country in South America occupying a long, narrow coastal strip between the Andes mountains to the east and the Pacific Ocean to the west. It borders Peru to the north, Bolivia to the northeast, Argentina to the east, and the Drake Passage in the far...
in the Los Lagos Region
Los Lagos Region
Los Lagos Region is one of Chile's 15 regions, which are first order administrative divisions, and comprises four provinces: Chiloé, Llanquihue, Osorno and Palena. The region contains the country's second largest island, Chiloé, and the second largest lake, Llanquihue.Its capital is Puerto Montt;...
. The bay of Frutillar is placed on the banks of Lake Llanquihue
Lake Llanquihue
Lake Llanquihue is the second largest lake in Chile with an area of about . It is situated in the southern Los Lagos Region in the Llanquihue and Osorno provinces. The lake's fan-like form was created by successive piedmont glaciers during the Quaternary glaciations...
, the largest lake entirely within Chile.

Vicente Perez Rosales on a later expedition towards the south of Valdivia
Valdivia
-Geography:*Chile** Valdivia, Chile, a city and municipality in the Province of Valdivia** Valdivia River, a river which begins in the city of Valdivia** Valdivia Province, the Province of Valdivia...
changed the course of the incoming colony to Lake Llanquihue. Rosales was searching for more land for the German settlers, south of Valdivia, as many sailing ships were arriving to the port of Valdivia from Germany sent by Bernardo Philippi under the official colonisation program of Southern Chile. This program was granted by President Manuel Bulnes and executed by president of Chile Manuel Montt
Manuel Montt
Manuel Francisco Antonio Julián Montt Torres was a Chilean statesman and scholar. He was twice elected President of Chile between 1851 and 1861.-Biography:...
naming officially Vicente Perez Rosales the head of the German colonisation of Llanquihue, as a continuation of the initial efforts done by Bernard Philippi.

The German Museum, Teatro del Lago, Cofradia Nautica de Frutillar and Patagonia Virgin are today's main attractions in Frutillar.
The German Museum: The museum opens daily and it is located in the centre of Frutillar's Bay, one of the most beautiful touristic village of Lake Llanquihue
Lake Llanquihue
Lake Llanquihue is the second largest lake in Chile with an area of about . It is situated in the southern Los Lagos Region in the Llanquihue and Osorno provinces. The lake's fan-like form was created by successive piedmont glaciers during the Quaternary glaciations...
. The German Colony that arrived to the city on 1856 build their houses, water mill, warehouse and gardens to live there, the decedents of these settlers decided to leave these buildings for a museum that shows the way they lived and it is decorated at the time. It is composed of a Garden, The machine warehouse, the water mill where they grind all seeds, and the main house that is located uphill with a great view to the Lake.

Teatro del Lago: Offers concerts all year round and it is located in the main coastal road of the bay. The theatre is considered the largest in the country and the best acoustic theatre ever built in South America. Every year the musical festival traditionally conducts a continuous 2 week concert, called Musical Festival or “Semanas Musicales” this takes place at the end of January and the first week of February in the theatre. This cultural activity brings thousand of visitors every year.

Cofradia Nautica de Frutillar - Yacht Club: Is the lake's largest and best equipped yacht club located in the bay 400 mts south of Teatro del Lago, along the coastal road of Frutillar Bay. The Club has activity all year; and promotes sailing in all categories. The yacht Club was established in 1986. There are 3 sailing schools in the bay that have been founded and promoted by “Cofradia”, also during the spring and summer the yacht club makes Regattas on the Bay and around the lake.

Patagonia Virgin: Is a new urban development that will have hotels, commerce, restaurants, golf course Nicklaus, apartments and houses, as well as trekking, polo and tennis. The village, which is at the foot of Patagonia Virgin, will have over 40 stores, shops and restaurants with wild forest and views to all four volcanoes accessing lake Llanquihue through the Frutillar Bay. It is located 200 mts south of Cofradia yacht club.

According to the 2002 census
Census
A census is the procedure of systematically acquiring and recording information about the members of a given population. It is a regularly occurring and official count of a particular population. The term is used mostly in connection with national population and housing censuses; other common...
of the National Statistics Institute
National Statistics Institute (Chile)
The National Statistics Institute of Chile is a state-run organization of the Government of Chile, created in the second half of the 19th century and tasked with performing a general census of population and housing, then collecting, producing and publishing official demographic statistics of...
, Frutillar spans an area of 831.4 sqkm and has 15,525 inhabitants (7,948 men and 7,577 women). Of these, 9,118 (58.7%) lived in urban area
Urban area
An urban area is characterized by higher population density and vast human features in comparison to areas surrounding it. Urban areas may be cities, towns or conurbations, but the term is not commonly extended to rural settlements such as villages and hamlets.Urban areas are created and further...
s and 6,407 (41.3%) in rural areas. The population grew by 18.4% (2,418 persons) between the 1992 and 2002 censuses.

As a commune, Frutillar is a third-level administrative division of Chile administered by a municipal council
Municipal council
A municipal council is the local government of a municipality. Specifically the term can refer to the institutions of various countries that can be translated by this term...
, headed by an alcalde
Alcalde
Alcalde , or Alcalde ordinario, is the traditional Spanish municipal magistrate, who had both judicial and administrative functions. An alcalde was, in the absence of a corregidor, the presiding officer of the Castilian cabildo and judge of first instance of a town...
who is directly elected every four years. The 2008-2012 alcalde is Ramón Espinoza Sandoval (PS
Socialist Party of Chile
The Socialist Party of Chile is a political party, that is part of the center-left Coalition of Parties for Democracy coalition. Its historical leader was the late President of Chile Salvador Allende Gossens, who was deposed by General Pinochet in 1973...
).

Within the electoral divisions of Chile, Frutillar is represented in the Chamber of Deputies
Chamber of Deputies of Chile
The Chamber of Deputies of the Republic of Chile is the lower house of Chile's bicameral Congress. Its organisation and its powers and duties are defined in articles 42 to 59 of Chile's current constitution....
by Fidel Espinoza (PS) and Carlos Recondo (UDI) as part of the 56th electoral district, (together with Puyehue
Puyehue, Chile
Puyehue is a commune in Chile located in Osorno Province of Los Lagos Region. It is bordered to the south by Rupanco Lake, to the east by the Andes and Argentina, to the north by Puyehue Lake and to the west by Osorno commune. Cardenal Antonio Samoré Pass that links the Los Lagos Region to...
, Río Negro
Río Negro, Chile
Río Negro is a Chilean city and commune in Osorno Province, Los Lagos Region, 38 km to the south of Osorno and 6 km of 5 Route the South...
, Purranque
Purranque
Purranque is a city in the Chilean Los Lagos Region, which lies on the Pan-American Highway about north of Puerto Montt. It is part of the Osorno Province.-History:...
, Puerto Octay
Puerto Octay
Puerto Octay is a town and commune located on the north shore of Llanquihue Lake in Los Lagos Region in the south of Chile. It was settled by German colonists in 1852. Puerto Octay was an important port with regular traffic to Puerto Varas before the coming of railway in 1912.-History:Its origin...
, Fresia, Llanquihue
Llanquihue, Chile
Llanquihue is a Chilean commune and city in Llanquihue Province, Los Lagos Region. The city lies on the western shore of Lake Llanquihue, where the Maullín River starts. It is located north of Puerto Varas and south of Frutillar and is connected to both cities by Chile Highway 5.- History :On 19...
, Puerto Varas
Puerto Varas
Puerto Varas is a city and commune located in the southern Chilean province of Llanquihue, in the Los Lagos Region.The city is well known for its German traditions, its food, its fish and seafood, the natural environment, its casino and 5 star hotels. Only from Puerto Montt, located on the shore...
and Los Muermos
Los Muermos
Los Muermos is a city and commune in Llanquihue Province, Los Lagos Region in southern Chile.-Demographics:According to the 2002 census of the National Statistics Institute, Los Muermos spans an area of and has 16,964 inhabitants . Of these, 5,707 lived in urban areas and 11,257 in rural areas...
). The commune is represented in the Senate
Senate of Chile
The Senate of the Republic of Chile is the upper house of Chile's bicameral National Congress, as established in the current Constitution of Chile.-Composition:...
by Camilo Escalona Medina (PS) and Carlos Kuschel Silva (RN
National Renewal (Chile)
National Renewal , is a liberal conservative political party belonging to the Chilean right-wing political coalition Coalition for Change in conjunction with the Independent Democratic Union and the Chile First movement...
) as part of the 17th senatorial constituency (Los Lagos Region).