Encyclopedia
In the 23rd Psalm in the Hebrew Bible
Hebrew Bible
The Hebrew Bible is a term used by biblical scholars outside of Judaism to refer to the Tanakh , a canonical collection of Jewish texts, and the common textual antecedent of the several canonical editions of the Christian Old Testament...
/Old Testament
Old Testament
The Old Testament, of which Christians hold different views, is a Christian term for the religious writings of ancient Israel held sacred and inspired by Christians which overlaps with the 24-book canon of the Masoretic Text of Judaism...
, the writer (David
David
David was the second king of the united Kingdom of Israel according to the Hebrew Bible and, according to the Gospels of Matthew and Luke, an ancestor of Jesus Christ through both Saint Joseph and Mary...
) describes God
God
God is the English name given to a singular being in theistic and deistic religions who is either the sole deity in monotheism, or a single deity in polytheism....
as his Shepherd. The text, beloved by Jews and Christian
Christian
A Christian is a person who adheres to Christianity, an Abrahamic, monotheistic religion based on the life and teachings of Jesus of Nazareth as recorded in the Canonical gospels and the letters of the New Testament...
s alike, is often alluded to in popular media and has been set to music.

Psalm 23 portrays God as a shepherd
Shepherd
A shepherd is a person who tends, feeds or guards flocks of sheep.- Origins :Shepherding is one of the oldest occupations, beginning some 6,000 years ago in Asia Minor. Sheep were kept for their milk, meat and especially their wool...
, feeding (verse 1) and leading (verse 3) his flock. The "rod and staff" (verse 4) are also the implements of a shepherd. Some commentators see the shepherd imagery pervading the entire psalm. J. Douglas MacMillan
J. Douglas MacMillan
J. Douglas MacMillan was a Christian minister in the Free Church of Scotland. MacMillan was born the youngest of six children, on the Ardnamurchan peninsula in Argyll. He was converted at the age of 21, and studied at the University of Aberdeen and at the Free Church College. After his ordination,...
argues that "you prepare a table for me" in verse 5 refers to the "old oriental shepherding practice" of using little raised tables to feed sheep. Similarly, "you anoint my head with oil" may refer to an ancient form of backliner
Glossary of sheep husbandry
The raising of domestic sheep has occurred in nearly every inhabited part of the globe, and the variations in cultures and languages which have kept sheep has produced a vast lexicon of unique terminology used to describe sheep husbandry...
—the oil is poured on wounds, and repels flies. MacMillan also notes that "Goodness and mercy" in verse 6 remind him of two sheepdogs
Herding dog
A herding dog, also known as a stock dog or working dog, is a type of pastoral dog that either has been trained in herding or belongs to breeds developed for herding...
coming behind the flock.

A long tradition ascribes authorship of the psalm to King David, said in the Hebrew Scriptures to have been a field shepherd himself as a youth.

Psalm 23 is traditionally sung by Jews in Hebrew
Hebrew language
Hebrew is a Semitic language of the Afroasiatic language family. Culturally, is it considered by Jews and other religious groups as the language of the Jewish people, though other Jewish languages had originated among diaspora Jews, and the Hebrew language is also used by non-Jewish groups, such...
at the third Shabbat
Shabbat
Shabbat is the seventh day of the Jewish week and a day of rest in Judaism. Shabbat is observed from a few minutes before sunset on Friday evening until a few minutes after when one would expect to be able to see three stars in the sky on Saturday night. The exact times, therefore, differ from...
meal on Saturday afternoon. It is also sung during the Yizkor service. Sephardic and some Hassidic Jews also sing during Friday afternoon services and as part of the Sabbath night and day meals. It is read at a cemetery funeral service instead of the traditional prayer during Jewish holidays.

The standard Hebrew text of the Bible used in Judaism
Judaism
Judaism ) is the "religion, philosophy, and way of life" of the Jewish people...
is the Masoretic text standardized between the seventh and tenth centuries CE. 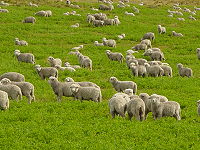 For Christians the image of God as a shepherd evokes connections not only with David but with Jesus
Jesus
Jesus of Nazareth , commonly referred to as Jesus Christ or simply as Jesus or Christ, is the central figure of Christianity...
, described as "the Good Shepherd" in the Gospel of John
Gospel of John
The Gospel According to John , commonly referred to as the Gospel of John or simply John, and often referred to in New Testament scholarship as the Fourth Gospel, is an account of the public ministry of Jesus...
. The phrase about "the valley of the shadow of death" is often taken as an allusion to the eternal life given by Jesus.

Orthodox Christian
Eastern Orthodox Church
The Orthodox Church, officially called the Orthodox Catholic Church and commonly referred to as the Eastern Orthodox Church, is the second largest Christian denomination in the world, with an estimated 300 million adherents mainly in the countries of Belarus, Bulgaria, Cyprus, Georgia, Greece,...
s typically include the Psalm in the prayers of preparation for receiving the Eucharist
Eucharist
The Eucharist , also called Holy Communion, the Sacrament of the Altar, the Blessed Sacrament, the Lord's Supper, and other names, is a Christian sacrament or ordinance...
.

The Reformation
Protestant Reformation
The Protestant Reformation was a 16th-century split within Western Christianity initiated by Martin Luther, John Calvin and other early Protestants. The efforts of the self-described "reformers", who objected to the doctrines, rituals and ecclesiastical structure of the Roman Catholic Church, led...
inspired widespread efforts in western Europe to make biblical texts available in vernacular languages. One of the most popular early English versions was the Geneva Bible
Geneva Bible
The Geneva Bible is one of the most historically significant translations of the Bible into the English language, preceding the King James translation by 51 years. It was the primary Bible of the 16th century Protestant movement and was the Bible used by William Shakespeare, Oliver Cromwell, John...
(1557). The most widely recognized version of the psalm in English today is undoubtedly the one drawn from the King James Bible (1611).

The psalm is a popular passage for memorization and is often used in sermons.

An early metrical version of the psalm in English was made in 1565 by Thomas Sternhold
Thomas Sternhold
Thomas Sternhold was an English courtier and the principal author of the first English metrical version of the Psalms, originally attached to the Prayer-Book as augmented by John Hopkins.-Life:...
. Other metrical versions to emerge from the Reformation
Protestant Reformation
The Protestant Reformation was a 16th-century split within Western Christianity initiated by Martin Luther, John Calvin and other early Protestants. The efforts of the self-described "reformers", who objected to the doctrines, rituals and ecclesiastical structure of the Roman Catholic Church, led...
include those from The Bay Psalm Book (1640) and a version influenced by Sternholm published in the Scottish Psalter (1650). The latter version is still encountered, with modernized spelling, in many Protestant hymn
Hymn
A hymn is a type of song, usually religious, specifically written for the purpose of praise, adoration or prayer, and typically addressed to a deity or deities, or to a prominent figure or personification...
s. Other notable metrical versions include those by George Herbert
George Herbert
George Herbert was a Welsh born English poet, orator and Anglican priest.Being born into an artistic and wealthy family, he received a good education that led to his holding prominent positions at Cambridge University and Parliament. As a student at Trinity College, Cambridge, Herbert excelled in...
and Isaac Watts
Isaac Watts
Isaac Watts was an English hymnwriter, theologian and logician. A prolific and popular hymnwriter, he was recognised as the "Father of English Hymnody", credited with some 750 hymns...
.

A traditional pairing puts a metrical version of the psalm with the hymn tune
Hymn tune
A hymn tune is the melody of a musical composition to which a hymn text is sung. Musically speaking, a hymn is generally understood to have four-part harmony, a fast harmonic rhythm , and no refrain or chorus....
Crimond, which is generally attributed to Jessie Seymour Irvine
Jessie Seymour Irvine
Jessie Seymour Irvine was the daughter of a Church of Scotland parish minister who served at Dunottar, Peterhead, and Crimond in Aberdeenshire, Scotland. She is referred to by Ian Campbell Bradley in his 1997 book Abide with Me: The World of Victorian Hymns as standing "in a strong Scottish...
. This version, with its opening words "The Lord's My Shepherd", is probably the best-known amongst English-speaking congregations. Other melodies, such as Brother James' Air or Amazing Grace
Amazing Grace
"Amazing Grace" is a Christian hymn with words written by the English poet and clergyman John Newton , published in 1779. With a message that forgiveness and redemption are possible regardless of the sins people commit and that the soul can be delivered from despair through the mercy of God,...
, are also used. Other tunes sometimes used include Belmont, Evan, Martyrdom, Orlington, and Wiltshire.

In the twentieth century, Psalm 23 became particularly associated with funeral liturgies in the English-speaking world, and films with funeral scenes often depict a graveside recitation of the psalm. Official liturgies of English-speaking churches were slow to adopt this practice, though. The Book of Common Prayer
Book of Common Prayer
The Book of Common Prayer is the short title of a number of related prayer books used in the Anglican Communion, as well as by the Continuing Anglican, "Anglican realignment" and other Anglican churches. The original book, published in 1549 , in the reign of Edward VI, was a product of the English...
of the Church of England has only psalms 39 and 90 in its order for the burial of the dead, and in the Episcopal Church
Episcopal Church (United States)
The Episcopal Church is a mainline Anglican Christian church found mainly in the United States , but also in Honduras, Taiwan, Colombia, Ecuador, Haiti, the Dominican Republic, Venezuela, the British Virgin Islands and parts of Europe...
in the United States, Psalm 23 was not used for funerals until the 1928 revision of the prayer book.