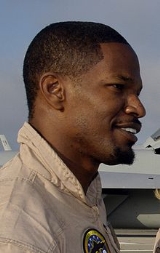 Overview
Eric Marlon Bishop professionally known as Jamie Foxx, is an American actor, singer-songwriter, stand-up comedian, and talk radio host. As an actor, his work in the film Ray
Ray (film)
Ray is a 2004 biographical film focusing on 30 years of the life of rhythm and blues musician Ray Charles. The independently produced film was directed by Taylor Hackford and starred Jamie Foxx in the title role; Foxx received an Academy Award for Best Actor for his performance.Charles was set to...
earned him the Academy Award and BAFTA Award for Best Actor as well as the Golden Globe Award
Golden Globe Award
The Golden Globe Award is an accolade bestowed by the 93 members of the Hollywood Foreign Press Association recognizing excellence in film and television, both domestic and foreign...
for Best Actor in a musical/comedy. He is also a Grammy Award
Grammy Award
A Grammy Award — or Grammy — is an accolade by the National Academy of Recording Arts and Sciences of the United States to recognize outstanding achievement in the music industry...
winning musician, producing three albums which have charted highly on the Billboard 200
Billboard 200
The Billboard 200 is a ranking of the 200 highest-selling music albums and EPs in the United States, published weekly by Billboard magazine. It is frequently used to convey the popularity of an artist or groups of artists...
: Unpredictable, which topped the chart, Best Night of My Life and Intuition
Intuition (Jamie Foxx album)
Intuition is the third studio album by R&B singer Jamie Foxx. It was released on December 16, 2008 in the United States under J Records....
.

Born in Terrell
Terrell, Texas
Terrell is a city in Kaufman County, Texas, United States, and a southeastern suburb of Dallas. As of the 2000 census, the city population was 13,606...
, Texas, Foxx was raised by his mother's adoptive parents.

Why is he noteworthy?
More
x