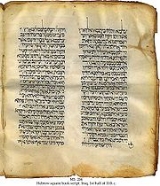 The Hebrew Bible is a term used by biblical scholars outside of Judaism
Judaism
Judaism ) is the "religion, philosophy, and way of life" of the Jewish people...
to refer to the Tanakh
Tanakh
The Tanakh is a name used in Judaism for the canon of the Hebrew Bible. The Tanakh is also known as the Masoretic Text or the Miqra. The name is an acronym formed from the initial Hebrew letters of the Masoretic Text's three traditional subdivisions: The Torah , Nevi'im and Ketuvim —hence...
, a canonical collection of Jewish texts, and the common textual antecedent of the several canonical editions
Development of the Old Testament canon
The Old Testament is the first section of the two-part Christian Biblical canon, which includes the books of the Hebrew Bible or protocanon and in some Christian denominations also includes several Deuterocanonical books or Biblical apocrypha...
of the Christian
Christian
A Christian is a person who adheres to Christianity, an Abrahamic, monotheistic religion based on the life and teachings of Jesus of Nazareth as recorded in the Canonical gospels and the letters of the New Testament...
Old Testament
Old Testament
The Old Testament, of which Christians hold different views, is a Christian term for the religious writings of ancient Israel held sacred and inspired by Christians which overlaps with the 24-book canon of the Masoretic Text of Judaism...
. These texts are composed mainly in Biblical Hebrew, with some passages in Biblical Aramaic
Biblical Aramaic
Biblical Aramaic is the form of the Aramaic language that is used in the books of Daniel, Ezra and a few other places in the Hebrew Bible and should not be confused with the Aramaic translations of the Hebrew Bible known as targumim....
(about half of the Book of Daniel
Book of Daniel
The Book of Daniel is a book in the Hebrew Bible. The book tells of how Daniel, and his Judean companions, were inducted into Babylon during Jewish exile, and how their positions elevated in the court of Nebuchadnezzar. The court tales span events that occur during the reigns of Nebuchadnezzar,...
, some parts of the Book of Ezra
Book of Ezra
The Book of Ezra is a book of the Hebrew Bible. Originally combined with the Book of Nehemiah in a single book of Ezra-Nehemiah, the two became separated in the early centuries of the Christian era...
and a few others).

The content, which closely corresponds to the Protestant Old Testament
Old Testament
The Old Testament, of which Christians hold different views, is a Christian term for the religious writings of ancient Israel held sacred and inspired by Christians which overlaps with the 24-book canon of the Masoretic Text of Judaism...
, does not include the deuterocanonical portions of the Roman Catholic
Roman Catholic Church
The Catholic Church, also known as the Roman Catholic Church, is the world's largest Christian church, with over a billion members. Led by the Pope, it defines its mission as spreading the gospel of Jesus Christ, administering the sacraments and exercising charity...
or the portions of the Eastern Orthodox Old Testaments.

I am beginning my study of Biblical Hebrew, and I noticed that many verses of the first chapters of Genesis begin with the conjunctive vav. This I ha...

What is the importance of the number 613 in the Hebrew Bible or what does it refrence?
More