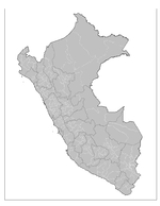 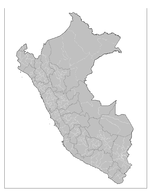 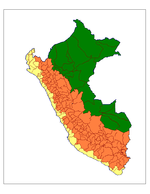 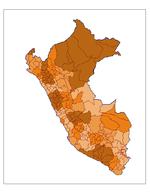 The provinces of Peru, known in Spanish
Spanish language
Spanish , also known as Castilian , is a Romance language in the Ibero-Romance group that evolved from several languages and dialects in central-northern Iberia around the 9th century and gradually spread with the expansion of the Kingdom of Castile into central and southern Iberia during the...
as provincias, are the second-level administrative subdivisions of the country. They are divided into districts
Districts of Peru
The districts of Peru are the third-level country subdivisions of Peru. They are subdivisions of the provinces, which in turn are subdivisions of the larger regions or departments...
. There are 195 provinces
Province
A province is a territorial unit, almost always an administrative division, within a country or state.-Etymology:The English word "province" is attested since about 1330 and derives from the 13th-century Old French "province," which itself comes from the Latin word "provincia," which referred to...
in Peru
Peru
Peru , officially the Republic of Peru , is a country in western South America. It is bordered on the north by Ecuador and Colombia, on the east by Brazil, on the southeast by Bolivia, on the south by Chile, and on the west by the Pacific Ocean....
, grouped into 25 regions
Regions of Peru
The regions of Peru are the first-level administrative subdivisions of Peru. Since its 1821 independence, Peru had been divided into departments but faced the problem of an increasing centralization of political and economic power in its capital, Lima...
except for the Lima Province
Lima Province
Lima Province is located in the central coast of Peru and is the only province in the country not belonging to any of the twenty-five regions. Its capital is Lima, which is also the nation's capital....
which does not belong to any region. This makes an average of 7 provinces per region. The region with the fewest provinces is Callao (one) and the region with the most is Ancash
Ancash Region
Ancash is a region in northern Peru. It is bordered by the La Libertad region on the north, the Huánuco and Pasco regions on the east, the Lima region on the south, and the Pacific Ocean on the west. Its capital is the city of Huaraz, and its largest city and port is Chimbote...
(twenty).

While provinces in the sparsely populated Amazon rainforest
Amazon Rainforest
The Amazon Rainforest , also known in English as Amazonia or the Amazon Jungle, is a moist broadleaf forest that covers most of the Amazon Basin of South America...
of eastern Peru tend to be larger, there is a large concentration of them in the north-central area of the country. The province with the least number of districts is Purus Province
Purús Province
Purus is one of four provinces in the Ucayali Region, in the central Amazon rainforest of Peru. The Purus River runs through it.The province is conformed by a single district , Purus District, whose capital is Esperanza. The district is headed by a mayor ....
, with just 1 district. The province with the most districts is Lima Province
Lima Province
Lima Province is located in the central coast of Peru and is the only province in the country not belonging to any of the twenty-five regions. Its capital is Lima, which is also the nation's capital....
, with 43 districts. The most common number of districts per province is 8, a total of 29 provinces share this number of districts.

The table below shows all provinces with their capitals and the region in which they are located. The UBIGEO code uniquely identifies each province. Capitals in bold are also a regional capital. Provinces in which the region's capital is located all have an UBIGEO code ending in 01.