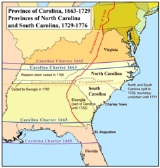 Encyclopedia
The Province of Carolina, originally chartered in 1629, was an English
English colonial empire
The English colonial empire consisted of a variety of overseas territories colonized, conquered, or otherwise acquired by the former Kingdom of England between the late 16th and early 18th centuries....
and later British colony
British colonization of the Americas
British colonization of the Americas began in 1607 in Jamestown, Virginia and reached its peak when colonies had been established throughout the Americas...
of North America
North America
North America is a continent wholly within the Northern Hemisphere and almost wholly within the Western Hemisphere. It is also considered a northern subcontinent of the Americas...
. Because the original Heath charter was unrealized and was ruled invalid, a new charter was issued to a group of eight English noblemen, the Lords Proprietor
Lords Proprietor
Lords Proprietor was the name for the chief or highest owners or proprietors of certain English proprietary colonies in America, such as Carolina, New Jersey and Barbados....
s, in 1663. Led informally by Anthony Ashley-Cooper, 1st Earl of Shaftesbury, the Province of Carolina was controlled from 1663 to 1729 by these lords and their heirs.

In 1691, dissent over the governance of the province led to the appointment of a deputy governor to administer the northern half of Carolina.

Following the 1660 restoration of the monarchy
English Restoration
The Restoration of the English monarchy began in 1660 when the English, Scottish and Irish monarchies were all restored under Charles II after the Interregnum that followed the Wars of the Three Kingdoms...
, Charles II of England
Charles II of England
Charles II was monarch of the three kingdoms of England, Scotland, and Ireland.Charles II's father, King Charles I, was executed at Whitehall on 30 January 1649, at the climax of the English Civil War...
rewarded, on March 24, 1663, eight men for their faithful support of his efforts to regain the throne of England. He granted the eight, called Lords Proprietors or simply Proprietors, the land called Carolina, which had been named in honor of Charles I
Charles I of England
Charles I was King of England, King of Scotland, and King of Ireland from 27 March 1625 until his execution in 1649. Charles engaged in a struggle for power with the Parliament of England, attempting to obtain royal revenue whilst Parliament sought to curb his Royal prerogative which Charles...
, his father (Carolus being the Latin
Latin
Latin is an Italic language originally spoken in Latium and Ancient Rome. It, along with most European languages, is a descendant of the ancient Proto-Indo-European language. Although it is considered a dead language, a number of scholars and members of the Christian clergy speak it fluently, and...
version of the name 'Charles').

The Lords Proprietors, operating under their royal charter, were able to exercise their authority with nearly the independence of the king himself. The actual government consisted of a governor, a powerful council, on which half of the councillors were appointed by the Lords Proprietors themselves, and a relatively weak, popularly elected assembly.

Although the Lost Colony on Roanoke Island
Roanoke Island
Roanoke Island is an island in Dare County near the coast of North Carolina, United States. It was named after the historical Roanoke Carolina Algonquian people who inhabited the area in the 16th century at the time of English exploration....
represented the first English attempt at settlement in the Carolina territory, the first permanent English settlement was not established until 1653, when emigrants from the Virginia Colony, with others from New England
New England
New England is a region in the northeastern corner of the United States consisting of the six states of Maine, New Hampshire, Vermont, Massachusetts, Rhode Island, and Connecticut...
and Bermuda
Bermuda
Bermuda is a British overseas territory in the North Atlantic Ocean. Located off the east coast of the United States, its nearest landmass is Cape Hatteras, North Carolina, about to the west-northwest. It is about south of Halifax, Nova Scotia, Canada, and northeast of Miami, Florida...
, settled at the mouths of the Chowan
Chowan River
The Chowan River is a blackwater river formed with the merging of Virginia's Blackwater and Nottoway rivers near the stateline between Virginia and North Carolina. According to the USGS a variant name is Choan River....
and Roanoke River
Roanoke River
The Roanoke River is a river in southern Virginia and northeastern North Carolina in the United States, 410 mi long. A major river of the southeastern United States, it drains a largely rural area of the coastal plain from the eastern edge of the Appalachian Mountains southeast across the Piedmont...
s, on the shores of Albemarle Sound
Albemarle Sound
Albemarle Sound is a large estuary on the coast of North Carolina in the United States located at the confluence of a group of rivers, including the Chowan and Roanoke. It is separated from the Atlantic Ocean by the Outer Banks, a long barrier peninsula upon which the town of Kitty Hawk is located,...
, in the northeastern corner of present-day North Carolina
North Carolina
North Carolina is a state located in the southeastern United States. The state borders South Carolina and Georgia to the south, Tennessee to the west and Virginia to the north. North Carolina contains 100 counties. Its capital is Raleigh, and its largest city is Charlotte...
. The Albemarle Settlements
Albemarle Settlements
The Albemarle Settlements were the first permanent English settlements in what is now North Carolina, founded in the Albemarle Sound and Roanoke River regions, beginning about the middle of the 17th century. The settlers were mainly Virginians migrating south...
, preceding the royal charter by ten years, came to be known in Virginia as "Rogues' Harbor". http://digital.library.upenn.edu/women/marshall/country/country-IV-42.html

In 1665, Sir John Yeamans
John Yeamans
Sir John Yeamans, 1st Baronet was an English colonial administrator described in his day as "a pirate ashore".-Life:...
established a second permanent settlement on the Cape Fear River
Cape Fear River
The Cape Fear River is a long blackwater river in east central North Carolina in the United States. It flows into the Atlantic Ocean near Cape Fear, from which it takes its name. The overall water quality of the river is continuously measured and monitored by and conducted by the , , and the...
, near present-day Wilmington, North Carolina
Wilmington, North Carolina
Wilmington is a port city in and is the county seat of New Hanover County, North Carolina, United States. The population is 106,476 according to the 2010 Census, making it the eighth most populous city in the state of North Carolina...
, which he named Clarendon.

Another region was settled under the Lords Proprietors in 1670, to the south of the other settlements, near present-day Charleston, South Carolina
Charleston, South Carolina
Charleston is the second largest city in the U.S. state of South Carolina. It was made the county seat of Charleston County in 1901 when Charleston County was founded. The city's original name was Charles Towne in 1670, and it moved to its present location from a location on the west bank of the...
. The Charles-Town settlement developed more rapidly than the Albemarle and Cape Fear settlements due to the advantages of a natural harbor and quickly developing trade with the West Indies. Lord Shaftesbury specified the street plan for Charles-Town; the nearby Ashley
Ashley River (South Carolina)
The Ashley River is a blackwater / tidal river in South Carolina, rising from the Wassamassaw and Great Cypress Swamps in western Berkeley County. It consolidates its main channel about five miles west of Summerville, widening into a tidal estuary just south of Fort Dorchester...
and Cooper River
Cooper River (South Carolina)
The Cooper River is a mainly tidal river in the U.S. state of South Carolina. These cities are located along the river, Mt. Pleasant, Charleston, North Charleston, Goose Creek and Hanahan. Short and wide, it is joined first by the blackwater East Branch, then farther downstream, the tidal Wando River...
s are named for him.

That southern settlement, which became known as Charleston, was the principal seat of government for the entire province. However, due to their remoteness from each other, the northern and southern sections of the colony operated more or less independently until 1691, when Philip Ludwell
Philip Ludwell
Philip Ludwell of Richneck Plantation in James City County, Virginia is best known for being governor of the British Colony of Carolina from 1691–94. From a base in the coastal port city of Charleston, he was governor of the entire Colony of Carolina...
was appointed governor of the entire province. From that time until 1708, the northern and southern settlements remained under one government. The north continued to have its own assembly and council; the governor resided in Charleston and appointed a deputy-governor for the north. During this period, the two halves of the province began increasingly to be known as North Carolina and South Carolina.

From 1708 to 1710, due to disquiet over attempts to establish the Anglican church in the province, the people were unable to agree on a slate of elected officials; consequently, there was no recognized and legal government for more than two years. This circumstance, coupled with the Tuscarora War
Tuscarora War
The Tuscarora War was fought in North Carolina during the autumn of 1711 until 11 February 1715 between the British, Dutch, and German settlers and the Tuscarora Native Americans. A treaty was signed in 1715....
and the Yamasee War
Yamasee War
The Yamasee War was a conflict between British settlers of colonial South Carolina and various Native American Indian tribes, including the Yamasee, Muscogee, Cherokee, Chickasaw, Catawba, Apalachee, Apalachicola, Yuchi, Savannah River Shawnee, Congaree, Waxhaw, Pee Dee, Cape Fear, Cheraw, and...
, and the inability of the Lords Proprietors to act decisively, led to separate governments for North and South Carolina.

Some take this period as the establishment of separate colonies, but that did not officially occur until 1729, when seven of the Lords Proprietors sold their interests in Carolina to The Crown
The Crown
The Crown is a corporation sole that in the Commonwealth realms and any provincial or state sub-divisions thereof represents the legal embodiment of governance, whether executive, legislative, or judicial...
, and both North Carolina and South Carolina became royal colonies. The eighth share was Sir George Carteret's, which had passed to his great-grandson John Carteret, 2nd Earl Granville
John Carteret, 2nd Earl Granville
John Carteret, 2nd Earl Granville, 7th Seigneur of Sark, KG, PC , commonly known by his earlier title as Lord Carteret, was a British statesman and Lord President of the Council from 1751 to 1763.-Family:...
. He retained ownership of a sixty-mile-wide strip of land in North Carolina adjoining the Virginia boundary, which became known as the Granville District
Granville District
The Granville District was a 60-mile wide strip of land in the North Carolina colony adjoining the boundary with Virginia, lying between north latitudes 35° 34' and 36° 30'....
. This district was to become the scene of many disputes, from 1729 until the American Revolutionary War
American Revolutionary War
The American Revolutionary War , the American War of Independence, or simply the Revolutionary War, began as a war between the Kingdom of Great Britain and thirteen British colonies in North America, and ended in a global war between several European great powers.The war was the result of the...
, at which time it was seized by the North Carolina revolutionary government.

Governments under proprietary rule and under crown rule were similarly organized. The primary difference was who was to appoint the governing officials: the Lords Proprietors or the Sovereign.