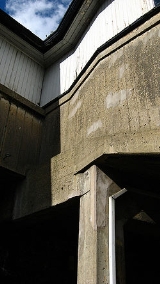 Overview
Concrete is a composite
Composite material
Composite materials, often shortened to composites or called composition materials, are engineered or naturally occurring materials made from two or more constituent materials with significantly different physical or chemical properties which remain separate and distinct at the macroscopic or...
construction material, composed of cement
Cement
In the most general sense of the word, a cement is a binder, a substance that sets and hardens independently, and can bind other materials together. The word "cement" traces to the Romans, who used the term opus caementicium to describe masonry resembling modern concrete that was made from crushed...
(commonly Portland cement
Portland cement
Portland cement is the most common type of cement in general use around the world because it is a basic ingredient of concrete, mortar, stucco and most non-specialty grout...
) and other cementitious materials such as fly ash
Fly ash
Fly ash is one of the residues generated in combustion, and comprises the fine particles that rise with the flue gases. Ash which does not rise is termed bottom ash. In an industrial context, fly ash usually refers to ash produced during combustion of coal...
and slag cement, aggregate
Construction Aggregate
Construction aggregate, or simply "aggregate", is a broad category of coarse particulate material used in construction, including sand, gravel, crushed stone, slag, recycled concrete and geosynthetic aggregates. Aggregates are the most mined material in the world...
(generally a coarse aggregate made of gravel or crushed rocks such as limestone
Limestone
Limestone is a sedimentary rock composed largely of the minerals calcite and aragonite, which are different crystal forms of calcium carbonate . Many limestones are composed from skeletal fragments of marine organisms such as coral or foraminifera....
, or granite
Granite
Granite is a common and widely occurring type of intrusive, felsic, igneous rock. Granite usually has a medium- to coarse-grained texture. Occasionally some individual crystals are larger than the groundmass, in which case the texture is known as porphyritic. A granitic rock with a porphyritic...
, plus a fine aggregate such as sand
Sand
Sand is a naturally occurring granular material composed of finely divided rock and mineral particles.The composition of sand is highly variable, depending on the local rock sources and conditions, but the most common constituent of sand in inland continental settings and non-tropical coastal...
), water
Water (properties)
Water is the most abundant compound on Earth's surface, covering about 70%. In nature, it exists in liquid, solid, and gaseous states. It is in dynamic equilibrium between the liquid and gas states at standard temperature and pressure. At room temperature, it is a tasteless and odorless liquid,...
and chemical
Chemistry
Chemistry is the science of matter, especially its chemical reactions, but also its composition, structure and properties. Chemistry is concerned with atoms and their interactions with other atoms, and particularly with the properties of chemical bonds....
admixtures.

The word concrete comes from the Latin word "concretus" (meaning compact or condensed), the perfect passive participle of "concrescere", from "con-" (together) and "crescere" (to grow).

I want to construct a house with pyramid shaped sloped roof of 52 degree slope. Since the steel gets magnetized in due course, I want a non magnetiz...

What is the average manhour ( direct and indirect) per one m3 of reiforced concrete for footing,column neck, ground beam,column,beams and slab. i.e no...
More
x