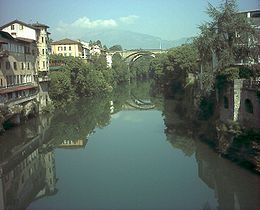 The Brembo, in Lombard Brèmb o Brèmp, is a 74 km Italian
Italy
Italy , officially the Italian Republic languages]] under the European Charter for Regional or Minority Languages. In each of these, Italy's official name is as follows:;;;;;;;;), is a unitary parliamentary republic in South-Central Europe. To the north it borders France, Switzerland, Austria and...
river, a left tributary of the Adda
Adda River
The Adda is a river in North Italy, a tributary of the Po. It rises in the Alps near the border with Switzerland and flows through Lake Como. The Adda joins the Po a few kilometres upstream of Cremona. It is 313 kilometres long...
, which runs entirely within the Province of Bergamo
Province of Bergamo
The Province of Bergamo is a province in the Lombardy region of Italy. It has a population of 1,098,740 , an area of 2,722.86 square km, and contains 244 comuni...
in the Lombardy
Lombardy
Lombardy is one of the 20 regions of Italy. The capital is Milan. One-sixth of Italy's population lives in Lombardy and about one fifth of Italy's GDP is produced in this region, making it the most populous and richest region in the country and one of the richest in the whole of Europe...
Region
Regions of Italy
The regions of Italy are the first-level administrative divisions of the state, constituting its first NUTS administrative level. There are twenty regions, of which five are constitutionally given a broader amount of autonomy granted by special statutes....
.

The Brembo springs from the Bergamo Alps
Bergamo Alps
The Bergamo Alps are a mountain range in the Italian Alps which forms part of the Central Eastern Alps. They are located in northern Lombardy and named after the city Bergamo, south of the mountains....
at the foot of Pizzo del Diavolo; on reaching Lenna
Lenna
Lenna or Lena is the name given to a 512 x 512 pixel standard test image originally cropped from the centerfold of November 1972 issue of Playboy magazine. It is a picture of Lena Söderberg, a Swedish model, shot by photographer Dwight Hooker...
it is united with a second branch which flows from Pizzo Tre Signori
Pizzo Tre Signori
Pizzo Tre Signori is a mountain in the Bergamo Alps, with an elevation of 2,554 metres.The name stems from the historical division of the area that it marked, between the State of Milan, the Republic of Venice and the Grisons canton of Switzerland....
. During its course it is fed by numerous of water courses; those with the greatest flows are the Stabina
Stabina
The Stabina is a stream in the Bergamo Alps of northern Italy. It begins at the Pizzo Tre Signori, and after nine kilometers, it flows into the Brembo river near the town of Olmo al Brembo....
, from Valtorta
Valtorta (valley)
The Valtorta is a side valley of the Val Brembana in the Bergamo Alps of north Italy . It extends in a west-to-east direction from the small settlement of Valtorta to Olmo al Brembo where its river, the torrente Stabina, flows into the Brembo....
, the Parina
Parina
The Parina is a stream in the Bergamo Alps of northern Italy. It begins between the Pizzo Arera and the Cima Valmora, passes near the villages of Oltre il Colle, Serina, Dossena and Lenna, and after sixteen kilometers flows into the Brembo river at Camerata Cornello....
, the Enna, a torrente
Torrente
Torrente may refer to:* Torrent, Valencia, a municipality located within the metropolitan area of the city of the Spanish city Valencia* Torrente , a Parisian haute couture fashion house founded by designer Rosette Torrente-Mett in 1969; current creative director Julien Fournie* Gonzalo Torrente...
of the Val Taleggio
Val Taleggio
The Val Taleggio is an Alpine valley in the Italian region of Lombardy split between the provinces of Bergamo and Lecco. It is a western fork of the Val Brembana which begins in the commune of San Giovanni Bianco, in the Province of Bergamo...
which joins the Brembo in the small town of San Giovanni Bianco
San Giovanni Bianco
San Giovanni Bianco is a comune in the Province of Bergamo in the Italian region Lombardy, located about 60 km northeast of Milan and about 20 km north of Bergamo, located in the Val Brembana.-External links:*...
, the Ambria, a torrente of the Valle Serina and the Dordo, a stream of Isola di Bergamo.

In the course of the centuries the river has seen many floods, often on a disastrous scale as was the case on 18 July 1987 when immense damage was done to the environs of the Val Brembana
Val Brembana
Val Brembana is a valley in Lombardy, northern Italy. It takes its name from the river crossing it, the Brembo.The Bergamo Alps form the valley's northern limits, notably the Tre Signori and Diavolo di Tenda Peaks, while at south lies the plain of Bergamo...
.