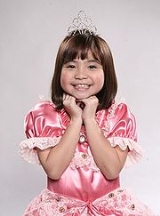 Encyclopedia
Princess Sarah was a ABS-CBN
ABS-CBN
ABS–CBN Corporation is a Philippine-based media conglomerate. It is the Philippines' largest media and entertainment conglomerate. The corporation was the merger of Alto Broadcasting System which at that time owned by James Lindenberg and Antonio Quirino, and the Chronicle Broadcasting Network ...
teleserye which premiered November 12, 2007 on primetime bida. The location of the series was shot in Camp John Hay in Baguio City
Baguio City
The City of Baguio is a highly urbanized city in northern Luzon in the Philippines. Baguio City was established by Americans in 1900 at the site of an Ibaloi village known as Kafagway...
and The Coconut Palace
Coconut Palace
The Coconut Palace, also known as Tahanang Pilipino , is the official residence and principal workplace of the Vice President of the Philippines. Located at the CCP Complex, in Pasay, south of the centre of Manila, it was commissioned by former First Lady Imelda Marcos for Pope John Paul II's visit...
in Manila
Manila
Manila is the capital of the Philippines. It is one of the sixteen cities forming Metro Manila.Manila is located on the eastern shores of Manila Bay and is bordered by Navotas and Caloocan to the north, Quezon City to the northeast, San Juan and Mandaluyong to the east, Makati on the southeast,...
.

Sarah Crewe studies in a boarding school for rich girls. Although motherless, Sarah is rich in love showered by her father, Capt. Christopher Crewe. But one day her father has to leave for an expedition… and is lost and presumed dead.

The sufferings of Sarah begin, the heretofore princess-like child works as a maid in the boarding school headed by the cruel Ms. Minchin. But with her pure heart and kindness, Sarah emerges not only as the princess of diamonds, but princess of hearts, as well.

Princess Sarah replaced Kokey
Kokey
Kokey is an ABS-CBN fantaserye which was premiered on Primetime Bida August 6, 2007. It is a show that was greatly criticized because of its one-dimensionality and lack of educational value. Other sources of hostility include potentially harmful acts such as lying with no punishment or scolding...
and was expected to follow its success. Its pilot episode garnered a 27.1% ratings according to AGB Nielsen in Mega Manila. It ran for only a month; the finale ratings were low, only able to reach a total of 22% ratings. The highest rating was 28.5% while the lowest was 20.6%.