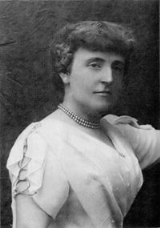 Overview
Frances Eliza Hodgson Burnett (24 November 1849 – 29 October 1924) was an English playwright and author. She is best known for her children's stories, in particular The Secret Garden
The Secret Garden
The Secret Garden is a novel by Frances Hodgson Burnett. It was initially published in serial format starting in the autumn of 1910, and was first published in its entirety in 1911. It is now one of Burnett's most popular novels, and is considered to be a classic of English children's...
(winner of the Lewis Carroll Shelf Award
Lewis Carroll Shelf Award
The Lewis Carroll Shelf Award was started in 1958 by Dr. David C. Davis with the assistance of Prof. Lola Pierstorff, Director Instructional Materials Center, Univ. of Wisconsin and Madeline Allen Davis, WHA Wisconsin Public Radio. Awards were presented annually at the Wisconsin Book Conference...
in 1959), A Little Princess
A Little Princess
A Little Princess is a 1905 children's novel by Frances Hodgson Burnett. It is a revised and expanded version of Burnett's 1888 serialized novel entitled Sara Crewe: or, What Happened at Miss Minchin's Boarding School, which was published in St. Nicholas Magazine.According to Burnett, she...
, and Little Lord Fauntleroy
Little Lord Fauntleroy
Little Lord Fauntleroy is the first children's novel written by English playwright and author Frances Hodgson Burnett. It was originally published as a serial in the St. Nicholas Magazine between November 1885 and October 1886, then as a book by Scribner's in 1886...
.

Born Frances Eliza Hodgson, she lived in Cheetham Hill
Cheetham Hill
Cheetham Hill is an inner city area of Manchester, England. As an electoral ward it is known as Cheetham and has a population of 12,846. It lies on the west bank of the River Irk, north-northeast of Manchester city centre and close to the boundary with the City of Salford...
, Manchester. When her father died, the family was forced to sell their home and move to Salford. When she was sixteen, the family emigrated to Knoxville, Tennessee.