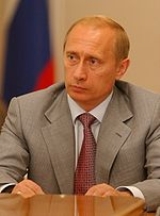 In the era of the Soviet Union
Soviet Union
The Soviet Union , officially the Union of Soviet Socialist Republics , was a constitutionally socialist state that existed in Eurasia between 1922 and 1991....
, the head of government was the Chairman of Council of People's Commissars (until 1946) and the Chairman of the Council of Ministers (after 1946). People who held those positions are sometimes referred to as the prime ministers. They may have also been referred to as Premier of Ministers, or simply premier
Premier
Premier is a title for the head of government in some countries and states.-Examples by country:In many nations, "premier" is used interchangeably with "prime minister"...
.

The current Chairman of the Government of the Russian Federation is Vladimir Putin
Vladimir Putin
Vladimir Vladimirovich Putin served as the second President of the Russian Federation and is the current Prime Minister of Russia, as well as chairman of United Russia and Chairman of the Council of Ministers of the Union of Russia and Belarus. He became acting President on 31 December 1999, when...
.

In general, the Prime Minister serves more of an administrative role, nominating members of the Cabinet and implementing domestic policy. In accordance with the federal constitutional law "On the Government of the Russian Federation" the Prime Minister exercises the following duties:

The Prime Minister is a member of:


In addition to his main duties and functions as the head of the cabinet Prime Minister Vladimir Putin chairs the following coordinating and consultative bodies at the Russian government:


At the moment Prime Minister Vladimir Putin
Vladimir Putin
Vladimir Vladimirovich Putin served as the second President of the Russian Federation and is the current Prime Minister of Russia, as well as chairman of United Russia and Chairman of the Council of Ministers of the Union of Russia and Belarus. He became acting President on 31 December 1999, when...
also holds the posts of:


The incumbent Prime Minister is also a technically non-partisan leader of the United Russia
United Russia
United Russia is a centrist political party in Russia and the largest party in the country, currently holding 315 of the 450 seats in the State Duma. The party was founded in December 2001, through a merger of the Unity and Fatherland-All Russia parties...
party, which commands a constitutional majority in the State Duma.

The Chairman of the Government is appointed by the President of Russia, subject to the consent of the State Duma
State Duma
The State Duma , common abbreviation: Госду́ма ) in the Russian Federation is the lower house of the Federal Assembly of Russia , the upper house being the Federation Council of Russia. The Duma headquarters is located in central Moscow, a few steps from Manege Square. Its members are referred to...
. Unlike most other "Prime Ministers", who are also elected members of the legislative body or parliament, the Chairman of the Government of Russia can be any Russian citizen, as long as they do not also hold citizenship of another country.

Other members of the Russian Government are appointed and dismissed by the President upon recommendation of the Chairman.

Under certain circumstances, the President may also theoretically be forced to dismiss the Chairman and the whole government under pressure of the State Duma. For that to happen the State Duma has to pass a censure motion against the Government twice within three months. Normally, in this case the President has the right to choose whether to sack the government or to dissolve the Duma (and if the Duma passes the censure motion just once, the President may also choose "not to agree" with the decision of the Duma, which technically means that neither the cabinet nor the Duma are dismissed).

However, within one year from parliamentary elections the dissolution of the Duma is impossible on these grounds. That is why in this case the President does not have any other option but to dismiss the Government (even if he totally supports it). However, the President is theoretically free to appoint the very same person as an acting head of the cabinet for an indefinite period of time should finding a compromise with the parliament turn to be impossible.


Succession of the presidency

In case of the President's death, resignation or impeachment
Impeachment
Impeachment is a formal process in which an official is accused of unlawful activity, the outcome of which, depending on the country, may include the removal of that official from office as well as other punishment....
, the Prime Minister becomes a temporary president
Acting President of the Russian Federation
The Acting President of the Russian Federation is a temporary post provided by the Constitution of Russia. Acting President is a person who fulfills the duties of President of the Russian Federation when cases of incapacity and vacancy occur...
until new presidential elections which must take place within three months. The Prime Minister acting as president may not dissolve the State Duma, announce a referendum or propose amendments to the Constitution.