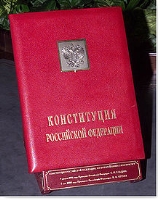 "We, the multinational people of the Russian Federation, united by a common fate on our land, establishing human rights and freedoms, civic peace and accord, preserving the historically established state unity, proceeding from the universally recognized principles of equality and self-determination of peoples, revering the memory of ancestors who have conveyed to us the love for the Motherland, belief in the good and justice, reviving the sovereign statehood of Russia and asserting the firmness of its democratic base, striving to ensure the well-being and prosperity of Russia, proceeding from the responsibility for our Motherland before the present and future generations, recognizing ourselves as part of the world community, adopt the Constitution of the Russian Federation."

The Russian Constitution has entrenched world standards for human rights and basic principles of democratic state-building such as ideological neutrality of the state, political pluralism, competitive elections and separation of powers
Separation of powers
The separation of powers, often imprecisely used interchangeably with the trias politica principle, is a model for the governance of a state. The model was first developed in ancient Greece and came into widespread use by the Roman Republic as part of the unmodified Constitution of the Roman Republic...
. The constitution establishes a super-presidential system, resembling the French system but with stronger executive power
Executive Power
Executive Power is Vince Flynn's fifth novel, and the fourth to feature Mitch Rapp, an American agent that works for the CIA as an operative for a covert counter terrorism unit called the "Orion Team."-Plot summary:...
due to the increased independence of the president in comparison to the French model.

The President of the Russian Federation holds primary power in the Russian government system. The President who is elected for a six year term, is the head of state and the Supreme Commander in Chief. He determines "guidelines for the domestic and foreign policy of the state". Although the President may preside over Government meetings, he is not the head of the Russian Government. As the head of the state the President appoints the members of the Government and directs it's activities. While in general the presidential "direction" of the activities of the Government is limited to establishing guidelines, under the 1997 Constitutional Law on the Government the President has a special authority over ministries dealing with defense, security
Security
Security is the degree of protection against danger, damage, loss, and crime. Security as a form of protection are structures and processes that provide or improve security as a condition. The Institute for Security and Open Methodologies in the OSSTMM 3 defines security as "a form of protection...
, internal and foreign affairs
Foreign Affairs
Foreign Affairs is an American magazine and website on international relations and U.S. foreign policy published since 1922 by the Council on Foreign Relations six times annually...
.