Encyclopedia
Portuguese wine is the result of traditions introduced to the region by ancient civilizations, such as the Phoenicians, Carthaginians, Greeks, and mostly the Romans. Portugal
Portugal
Portugal , officially the Portuguese Republic is a country situated in southwestern Europe on the Iberian Peninsula. Portugal is the westernmost country of Europe, and is bordered by the Atlantic Ocean to the West and South and by Spain to the North and East. The Atlantic archipelagos of the...
started to export its wines to Rome during the Roman Empire
Lusitania
Lusitania or Hispania Lusitania was an ancient Roman province including approximately all of modern Portugal south of the Douro river and part of modern Spain . It was named after the Lusitani or Lusitanian people...
. Modern exports developed with trade to England after the Methuen Treaty
Methuen Treaty
The Methuen Treaty was an offensive military and commercial treaty between Portugal and England signed in 1703 as part of the War of the Spanish Succession....
in 1703. From this commerce a wide variety of wines started to be grown in Portugal. And, in 1758, the first wine-producing region of the world, the Região Demarcada do Douro was created under the orientation of Marquis of Pombal, in the Douro Valley. Portugal has two wine producing regions protected by UNESCO as World Heritage: the Douro Valley
Douro, Subregion
Douro Subregion is a part of Norte Region, Portugal that includes most of the Portuguese section of the Douro River.With an area of 4,114 km² and a population of 217,000, it is one of the less-densely-populated Portuguese subregions. Its main urban centers are Vila Real Douro Subregion is a...
Wine Region (Douro Vinhateiro) and Pico Island
Pico Island
Pico Island , is an island in the Central Group of the Portuguese Azores noted for its eponymous volcano, Ponta do Pico, which is the highest mountain in Portugal, the Azores, and the highest elevation of the Mid-Atlantic Ridge...
Wine Region (Ilha do Pico Vinhateira). Portugal has a large variety of native breeds, producing a very wide variety of different wines with distinctive personality.

Romans did much to expand and promote viticulture in their settlements in the province of Lusitania
Lusitania
Lusitania or Hispania Lusitania was an ancient Roman province including approximately all of modern Portugal south of the Douro river and part of modern Spain . It was named after the Lusitani or Lusitanian people...
(mainly modern south Portugal). Wines were produced across the territory for both local consumption as well as export
Export
The term export is derived from the conceptual meaning as to ship the goods and services out of the port of a country. The seller of such goods and services is referred to as an "exporter" who is based in the country of export whereas the overseas based buyer is referred to as an "importer"...
to Rome
Rome
Rome is the capital of Italy and the country's largest and most populated city and comune, with over 2.7 million residents in . The city is located in the central-western portion of the Italian Peninsula, on the Tiber River within the Lazio region of Italy.Rome's history spans two and a half...
.

During the Reconquista
Reconquista
The Reconquista was a period of almost 800 years in the Middle Ages during which several Christian kingdoms succeeded in retaking the Muslim-controlled areas of the Iberian Peninsula broadly known as Al-Andalus...
in the 12th and 13th centuries, with the populating (povoamento) of the conquered territories, areas due to religion the Arabs reduced wine production. During this period, some new varieties were added to the ancient ones, from Burgundy came the French varieties. And during the period of discoveries, Henry the Navigator brought to the newly discovered island of Madeira the Moscatel and Malvasia
Malvasia
Malvasia is a group of wine grape varieties grown historically in the Mediterranean region, Balearic islands, Canary Islands and the island of Madeira, but now grown in many of the winemaking regions of the world...
from the Greek Island of Crete
Crete
Crete is the largest and most populous of the Greek islands, the fifth largest island in the Mediterranean Sea, and one of the thirteen administrative regions of Greece. It forms a significant part of the economy and cultural heritage of Greece while retaining its own local cultural traits...
. In the Reign of King Carlos
Carlos I of Portugal
-Assassination:On 1 February 1908 the royal family returned from the palace of Vila Viçosa to Lisbon. They travelled by train to Barreiro and, from there, they took a steamer to cross the Tagus River and disembarked at Cais do Sodré in central Lisbon. On their way to the royal palace, the open...
, the Região Demarcada do Vinho Verde and the Região Demarcada do Dão among Colares, Carcavelos, Setúbal, and Madeira were created. In 1979, Bairrada was added and in 1980 the Algarve region (Lagoa
Lagoa (Algarve)
Lagoa Municipality is a Portuguese municipality in Faro District, in the region known as the Algarve, with about 6,100 inhabitants.Its seat is the city of Lagoa....
, Lagos
Lagos
Lagos is a port and the most populous conurbation in Nigeria. With a population of 7,937,932, it is currently the third most populous city in Africa after Cairo and Kinshasa, and currently estimated to be the second fastest growing city in Africa...
, Portimão
Portimão
Portimão is a Portuguese town located in the District of Faro in the Region of Algarve, the southern coast of Portugal. It was formerly known as Vila Nova de Portimão . In 1924, it was incorporated as a cidade and became known merely as Portimão. The town has 41,000 inhabitants and the Portimão...
, and Tavira
Tavira
Tavira is a Portuguese city, situated at 37°07' north, 7°39' west in the east of the Algarve on the south coast of Portugal. It is 30 km east of Faro and 160 km west of Seville in Spain. The Gilão River meets the Atlantic Ocean in Tavira....
) was finally demarcated. In 1998, the Alentejo region was demarked by the gathering several smaller demarked regions created in 1995. 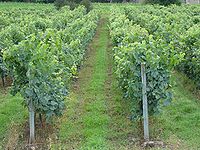 Portugal possesses a large array of native varietals, producing an abundant variety of different wines. The wide array of Portuguese grape varietals contributes as significantly as the soil and climate to wine differentiation, producing distinctive wines from the Northern regions to Madeira Islands, and from Algarve to the Azores
Azores
The Archipelago of the Azores is composed of nine volcanic islands situated in the middle of the North Atlantic Ocean, and is located about west from Lisbon and about east from the east coast of North America. The islands, and their economic exclusion zone, form the Autonomous Region of the...
. In Portugal only some grape varietals or castas are authorized or endorsed in the Demarcated regions, such as:

The appellation system of the Douro region was created nearly two hundred years before that of France
France
The French Republic , The French Republic , The French Republic , (commonly known as France , is a unitary semi-presidential republic in Western Europe with several overseas territories and islands located on other continents and in the Indian, Pacific, and Atlantic oceans. Metropolitan France...
, in order to protect its superior wines from inferior ones. The quality and great variety of wines in Portugal are due to noble castas, microclimates, soils and proper technology. 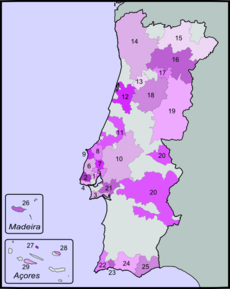 Port wine
Port wine
Port wine is a Portuguese fortified wine produced exclusively in the Douro Valley in the northern provinces of Portugal. It is typically a sweet, red wine, often served as a dessert wine, and comes in dry, semi-dry, and white varieties...
vines need to grow in schist
Schist
The schists constitute a group of medium-grade metamorphic rocks, chiefly notable for the preponderance of lamellar minerals such as micas, chlorite, talc, hornblende, graphite, and others. Quartz often occurs in drawn-out grains to such an extent that a particular form called quartz schist is...
rich soil and require a specific micro-climate. It is produced through a unique vinification method. The red varietals are the most common. The wine is produced in the beautiful landscape of the Douro Valley in Alto Douro region, a region that is classified as World Heritage by UNESCO
UNESCO
The United Nations Educational, Scientific and Cultural Organization is a specialized agency of the United Nations...
. The wine is exported from the city of Porto
Porto
Porto , also known as Oporto in English, is the second largest city in Portugal and one of the major urban areas in the Iberian Peninsula. Its administrative limits include a population of 237,559 inhabitants distributed within 15 civil parishes...
, thus acquiring the name Porto (or "Port" in English-speaking countries). There are several varieties of Port wine: some of the most popular are the Tawny, White, Ruby, and Late Bottled Vintage (L.B.V.).

Moscatel
Muscat (grape and wine)
The Muscat variety of grapes of the species Vitis vinifera is widely grown for wine, raisins and table grapes. Their color ranges from white to near black. Muscat almost always has a pronounced sweet floral aroma. Muscat grapes are grown around the world...
is a liqueurous wine from the Setúbal Peninsula
Setúbal Peninsula
Setúbal Peninsula is a peninsula in Portugal. The Portuguese language name is Península de Setúbal and gives its name to Península de Setúbal Subregion which coves more than only the peninsula....
. Although the region has produced wines since the dawn of nationality, it was in 1797 that the wines of Setúbal were first mentioned. There is another variety of Moscatel wine, the "Moscatel de Favaios", in the Região Demarcada do Douro, it is made from a different casta, and the "Galego" (white), while Moscatel Roxo is made upon a casta with the same name as the wine.

Wine has been one of the most noted Portuguese exports. The country is the seventh largest exporter of the product worldwide, by value.