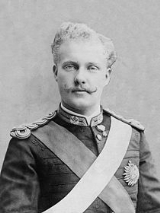 On 1 February 1908 the royal family returned from the palace of Vila Viçosa
Vila Viçosa
Vila Viçosa is a municipality in Portugal with a total area of 195.0 km² and a total population of 8,745 inhabitants.The municipality is composed of 5 parishes, and is located in the District of Évora....
to Lisbon. They travelled by train to Barreiro and, from there, they took a steamer to cross the Tagus River and disembarked at Cais do Sodré
Cais do Sodré
Cais do Sodré is the railway station in Lisbon, Portugal, serving westbound suburban route to Cascais resort. It is adjacent to the Lisbon Metro station of the same name which is the terminus for subway's Green Line...
in central Lisbon. On their way to the royal palace, the open carriage with Carlos I and his family passed through the Terreiro do Paço fronting on the river. While crossing the square, shots were fired from the crowd by two republican activists: Alfredo Costa and Manuel Buiça.

Buiça, a former army sergeant and sharpshooter, fired five shots from a rifle hidden under his long overcoat. The king died immediately, his heir, Luís Filipe, was mortally wounded, and Prince Manuel was hit in the arm. The Queen alone escaped injury. The two assassins were killed on the spot by police and bodyguards; an innocent bystander was also killed in the confusion. The royal carriage turned into the nearby Navy Arsenal, where, about twenty minutes later, the Prince Royal Luis Filipe died. Several days later, the younger son, Prince Manuel
Manuel II of Portugal
Manuel II , named Manuel Maria Filipe Carlos Amélio Luís Miguel Rafael Gabriel Gonzaga Francisco de Assis Eugénio de Bragança Orleães Sabóia e Saxe-Coburgo-Gotha — , was the last King of Portugal from 1908 to 1910, ascending the throne after the assassination of his father and elder brother Manuel...
, was proclaimed King of Portugal; he was the last of the Braganza-Saxe-Coburg and Gotha dynasty
House of Braganza-Saxe-Coburg and Gotha
The House of Braganza-Saxe-Coburg and Gotha was a branch of the House of Braganza that ruled the Kingdom of Portugal from 1853 until the declaration of the republic in 1910....
and the last king as well.

Maria Pia de Saxe-Coburgo e Bragança (1907–1995) had claimed (many years after his death) that she was the bastard daughter of King Carlos I by Maria Amélia Laredó e Murça.