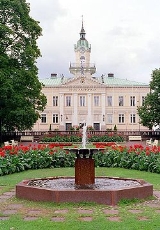 Encyclopedia
Pori is a city and municipality on the west coast of Finland. The city is located some 15 kilometres (9 mi) from the Gulf of Bothnia
Gulf of Bothnia
The Gulf of Bothnia is the northernmost arm of the Baltic Sea. It is situated between Finland's west coast and Sweden's east coast. In the south of the gulf lie the Åland Islands, between the Sea of Åland and the Archipelago Sea.-Name:...
, on the estuary of the Kokemäenjoki
Kokemäenjoki
The Kokemäenjoki is a river and its drainage basin in southwestern Finland.-Geography:The river originates at Lake Liekovesi in the Pirkanmaa region, and flows to the Gulf of Bothnia at Pori in the Satakunta region...
river, which is the largest in Finland. Pori is the most important town in the Satakunta
Satakunta (region)
Satakunta is a region of Finland, part of the former Western Finland Province. It borders the regions of Finland Proper, Pirkanmaa, Southern Ostrobothnia and Ostrobothnia. The main city of the region is Pori. The name of the region literally means Hundred...
region
Regions of Finland
Finland consists of 19 regions called in Finnish and in Swedish. The regions are governed by regional councils, which serve as forums of cooperation for the municipalities of a region. The main tasks of the regions are regional planning and development of enterprise and education. In addition,...
.

Pori is known, among other things, for the sandy beaches of Yyteri
Yyteri
Yyteri is a district in the city of Pori, Finland.Yyteri is located about 17 km away from the centre of Pori, bordering the Baltic sea. Yyteri is not an urban district, instead it is mostly like a holiday resort...
and for hosting Pori Jazz
Pori Jazz
Pori Jazz is a large international jazz festival, held annually in the coastal city of Pori , Finland. It is one of the oldest and best known jazz festivals in Europe, having been arranged every year since 1966...
, an annual international jazz
Jazz
Jazz is a musical style that originated at the beginning of the 20th century in African American communities in the Southern United States. It was born out of a mix of African and European music traditions. From its early development until the present, jazz has incorporated music from 19th and 20th...
festival. Performers at the jazz fesival have included Miles Davis
Miles Davis
Miles Dewey Davis III was an American jazz musician, trumpeter, bandleader, and composer. Widely considered one of the most influential musicians of the 20th century, Miles Davis was, with his musical groups, at the forefront of several major developments in jazz music, including bebop, cool jazz,...
, The Brand New Heavies and Steely Dan
Steely Dan
Steely Dan is an American rock band; its core members are Donald Fagen and Walter Becker. The band's popularity peaked in the late 1970s, with the release of seven albums blending elements of jazz, rock, funk, R&B, and pop...

The local newspaper in Pori is the Satakunnan Kansa paper, giving an overview of the recent news. There are also sports and children's articles included.

The name Pori comes from the borg part (meaning "castle") of the original name in Swedish with a Fennicised pronunciation. The Swedish name Björneborg means "bear castle", and the Latin
Latin
Latin is an Italic language originally spoken in Latium and Ancient Rome. It, along with most European languages, is a descendant of the ancient Proto-Indo-European language. Although it is considered a dead language, a number of scholars and members of the Christian clergy speak it fluently, and...
name Arctopolis means "bear city".

The river had a key role in the creation of Pori. Sailing in the Kokemäki river
Kokemäenjoki
The Kokemäenjoki is a river and its drainage basin in southwestern Finland.-Geography:The river originates at Lake Liekovesi in the Pirkanmaa region, and flows to the Gulf of Bothnia at Pori in the Satakunta region...
had become more and more difficult after the 14th century. The importance of Kokemäki and Ulvila began to decline when ships could no longer navigate the river. In the 16th century, the situation had become so bad that John III
John III of Sweden
-Family:John married his first wife, Catherine Jagellonica of Poland , house of Jagiello, in Vilnius on 4 October 1562. In Sweden, she is known as Katarina Jagellonica. She was the sister of king Sigismund II Augustus of Poland...
decided to establish a new harbour and market town closer to the sea. The concept and location and were good, but the inhabitants were missing.

The Bourgeois of Rauma
Rauma, Finland
Rauma is a town and municipality of ca. inhabitants on the west coast of Finland, north of Turku, and south of Pori. Granted town privileges on May 17, 1442 , Rauma is known of its high quality lace , and of the old wooden architecture of its centre , which is a Unesco world heritage...
and Ulvila
Ulvila
Ulvila is a town and municipality of Finland. It is one of the six medieval cities of Finland. Its position as city was taken over by Pori in the 16th century....
had been ordered to move to Helsinki
Helsinki
Helsinki is the capital and largest city in Finland. It is in the region of Uusimaa, located in southern Finland, on the shore of the Gulf of Finland, an arm of the Baltic Sea. The population of the city of Helsinki is , making it by far the most populous municipality in Finland. Helsinki is...
, which had recently been founded, however they did not enjoy living in Helsinki, and after numerous pleas the citizens of Rauma were given permission to return to their previous homes. However, those from Ulvila were ordered to migrate to the newly founded city of Pori. On 8 March 1558 John III
John III of Sweden
-Family:John married his first wife, Catherine Jagellonica of Poland , house of Jagiello, in Vilnius on 4 October 1562. In Sweden, she is known as Katarina Jagellonica. She was the sister of king Sigismund II Augustus of Poland...
gave the charter of Pori, which read: "Because we have seen that it would be best to build a strong market town alongside the sea, and because we cannot find anywhere suitable for fortifying in Ulvila, we have chosen another location at Pori."

At the time Pori had around 300 involuntary residents. However, they soon recognised the advantages of their new location, which offered opportunities for profitable trading, amongst other things. 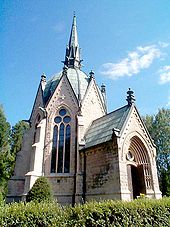 Porin Ässät are the ice hockey
Ice hockey
Ice hockey, often referred to as hockey, is a team sport played on ice, in which skaters use wooden or composite sticks to shoot a hard rubber puck into their opponent's net. The game is played between two teams of six players each. Five members of each team skate up and down the ice trying to take...
team that play in highest Finnish level, SM-liiga
SM-liiga
The SM-liiga is the top professional ice hockey league in Finland. As of March 2008, it is ranked by the IIHF as the second strongest league in Europe. It was created in 1975 to replace the SM-sarja, which was fundamentally an amateur league. The SM-liiga is not directly overseen by the Finnish Ice...
. They have won the championship twice (1971 and 1978).

Porin Narukerä, or just Narukerä, play in the highest bandy
Bandy
Bandy is a team winter sport played on ice, in which skaters use sticks to direct a ball into the opposing team's goal.The rules of the game have many similarities to those of association football: the game is played on a rectangle of ice the same size as a football field. Each team has 11 players,...
division and have become Finnish champions once.

More than of the population has Finnish as their first language, and about has either Arabic, French, German, Russian or Swedish as their first language. There is a small minority of about of Swedish speakers in the city. There is a Swedish School and a Swedish Culture Club that are aimed at serving the Finland-Swedish minority
Finland-Swedes
Swedish-speaking Finns constitute a linguistic minority in Finland. They maintain a strong identity and are alternatively seen either as a distinct subgroup of the Finnish people or as a separate ethnic group or even as a distinct nationality...
in the Satakunta region.

Pori is twinned
Town twinning
Twin towns and sister cities are two of many terms used to describe the cooperative agreements between towns, cities, and even counties in geographically and politically distinct areas to promote cultural and commercial ties.- Terminology :...
with: Bremerhaven
Bremerhaven
Bremerhaven is a city at the seaport of the free city-state of Bremen, a state of the Federal Republic of Germany. It forms an enclave in the state of Lower Saxony and is located at the mouth of the River Weser on its eastern bank, opposite the town of Nordenham...
, Germany, since 1967 Eger
Eger
Eger is the second largest city in Northern Hungary, the county seat of Heves, east of the Mátra Mountains. Eger is best known for its castle, thermal baths, historic buildings , and red and white wines.- Name :...
, Hungary, since 1973 Kołobrzeg, Poland, since 1975 Mâcon
Mâcon
Mâcon is a small city in central France. It is prefecture of the Saône-et-Loire department, in the region of Bourgogne, and the capital of the Mâconnais district. Mâcon is home to over 35,000 residents, called Mâconnais.-Geography:...
, France, since 1990 Porsgrunn
Porsgrunn
is a town and municipality in Telemark county, Norway. It is part of the traditional region of Grenland. The administrative centre of the municipality is the town of Porsgrunn....
, Norway, since 1956 Riga
Riga
Riga is the capital and largest city of Latvia. With 702,891 inhabitants Riga is the largest city of the Baltic states, one of the largest cities in Northern Europe and home to more than one third of Latvia's population. The city is an important seaport and a major industrial, commercial,...
, Latvia, since 1965 Stralsund
Stralsund
- Main sights :* The Brick Gothic historic centre is a UNESCO World Heritage Site.* The heart of the old town is the Old Market Square , with the Gothic Town Hall . Behind the town hall stands the imposing Nikolaikirche , built in 1270-1360...
, Germany, since 1968 Sundsvall
Sundsvall
-External links:* - Official site from Nordisk Familjebok - Sundsvalls tourist information bureau. - The alternative guide to Sundsvall. - Blog with photos from Sundsvall....
, Sweden, since 1940 Sønderborg
Sønderborg
Sønderborg Municipality , is a municipality in Region of Southern Denmark partially on the Jutland peninsula and partially on the island of Als in south Denmark, at the border with Germany. The municipality covers an area of , and has a total population of 76,236...
, Denmark, since 1952

The asteroid
Asteroid
Asteroids are a class of small Solar System bodies in orbit around the Sun. They have also been called planetoids, especially the larger ones...
1499 Pori
1499 Pori
1499 Pori is a main-belt asteroid discovered on October 16, 1938 by Y. Väisälä at Turku, and is named after the city of Pori, Finland.- External links :*...
was named after the city by its discoverer, the Finnish astronomer
Astronomer
An astronomer is a scientist who studies celestial bodies such as planets, stars and galaxies.Historically, astronomy was more concerned with the classification and description of phenomena in the sky, while astrophysics attempted to explain these phenomena and the differences between them using...
Yrjö Väisälä
Yrjö Väisälä
Yrjö Väisälä was a Finnish astronomer and physicist.His main contributions were in the field of optics, but he was also very active in geodetics, astronomy and optical metrology...
.

There is a broadcasting facility near Pori for medium-wave and short-wave broadcasting managed by Digita
Digita
Digita is a genus of moths of the Micronoctuidae family.-Species:*Digita biuncus Fibiger, 2008*Digita ampullai Fibiger, 2008-References: 2008: Revision of the Micronoctuidae . Part 2, Taxonomy of the Belluliinae, Magninae and Parachrostiinae. 1867: 1-136....
. The medium-wave transmitter uses a 185 m (607 ft) guyed mast as an aerial.