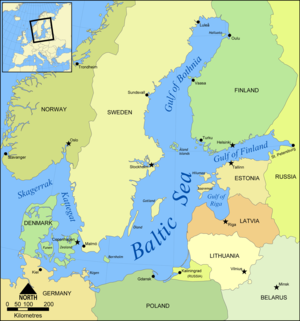 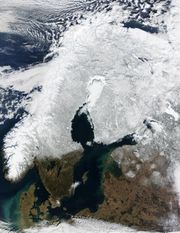 The Gulf of Bothnia is the northernmost arm of the Baltic Sea
Baltic Sea
The Baltic Sea is a brackish mediterranean sea located in Northern Europe, from 53°N to 66°N latitude and from 20°E to 26°E longitude. It is bounded by the Scandinavian Peninsula, the mainland of Europe, and the Danish islands. It drains into the Kattegat by way of the Øresund, the Great Belt and...
. It is situated between Finland
Finland
Finland , officially the Republic of Finland, is a Nordic country situated in the Fennoscandian region of Northern Europe. It is bordered by Sweden in the west, Norway in the north and Russia in the east, while Estonia lies to its south across the Gulf of Finland.Around 5.4 million people reside...
's west coast and Sweden
Sweden
Sweden , officially the Kingdom of Sweden , is a Nordic country on the Scandinavian Peninsula in Northern Europe. Sweden borders with Norway and Finland and is connected to Denmark by a bridge-tunnel across the Öresund....
's east coast. In the south of the gulf lie the Åland Islands, between the Sea of Åland
Sea of Åland
The Sea of Åland is the waters located in the southern Gulf of Bothnia, between the Åland islands and the Swedish mainland. The sea connects Kvarken and the Bothnian Sea with the Baltic Sea proper. The seas are often choppy here. The narrowest part is named Södra Kvarken or South Kvarken....
and the Archipelago Sea
Archipelago Sea
Archipelago Sea is a part of the Baltic Sea between the Gulf of Bothnia, the Gulf of Finland and the Sea of Åland, within Finnish territorial waters...
.

Bothnia is a Latin
Latin
Latin is an Italic language originally spoken in Latium and Ancient Rome. It, along with most European languages, is a descendant of the ancient Proto-Indo-European language. Although it is considered a dead language, a number of scholars and members of the Christian clergy speak it fluently, and...
ization. "Botten" in the Swedish name "Bottenviken" originally meant "gulf" or "bay" ; hence "Bottenviken" means "the Gulf-gulf".

The name botn was applied to the Gulf of Bothnia as Helsingjabotn in Old Norse
Old Norse
Old Norse is a North Germanic language that was spoken by inhabitants of Scandinavia and inhabitants of their overseas settlements during the Viking Age, until about 1300....
, after Hälsingland
Hälsingland
' is a historical province or landskap in central Sweden. It borders to Gästrikland, Dalarna, Härjedalen, Medelpad and to the Gulf of Bothnia...
, which at the time referred to the coastland west of the gulf. Later, botten was applied to the regions Västerbotten
Västerbotten
', English exonym: West Bothnia, is a province or landskap in the north of Sweden. It borders Ångermanland, Lapland, Norrbotten and the Gulf of Bothnia. It is famous for the cheese with the same name as the province.- Administration :...
on the western side and Österbotten
Ostrobothnia (region)
Ostrobothnia is a region of Finland. It is located in Western Finland. It borders the regions Central Ostrobothnia, Southern Ostrobothnia, and Satakunta and is one of the four regions making up the historical province of Ostrobothnia....
the eastern side ("East Bottom" and "West Bottom"). The Finnish name of Österbotten, Pohjanmaa, or "Pohja"-land, gives a hint as to the meaning in both languages: pohja means both "bottom" and "north."

Botn/botten is cognate
Cognate
In linguistics, cognates are words that have a common etymological origin. This learned term derives from the Latin cognatus . Cognates within the same language are called doublets. Strictly speaking, loanwords from another language are usually not meant by the term, e.g...
with the English
English language
English is a West Germanic language that arose in the Anglo-Saxon kingdoms of England and spread into what was to become south-east Scotland under the influence of the Anglian medieval kingdom of Northumbria...
word bottom, and it might be part of a general north European distinction of lowlands, as opposed to highlands, such as the Netherlandic
Netherlands
The Netherlands is a constituent country of the Kingdom of the Netherlands, located mainly in North-West Europe and with several islands in the Caribbean. Mainland Netherlands borders the North Sea to the north and west, Belgium to the south, and Germany to the east, and shares maritime borders...
region, Samogitia
Samogitia
Samogitia is one of the five ethnographic regions of Lithuania. It is located in northwestern Lithuania. Its largest city is Šiauliai/Šiaulē. The region has a long and distinct cultural history, reflected in the existence of the Samogitian dialect...
(Lithuania
Lithuania
Lithuania , officially the Republic of Lithuania is a country in Northern Europe, the biggest of the three Baltic states. It is situated along the southeastern shore of the Baltic Sea, whereby to the west lie Sweden and Denmark...
n), and Sambia
Sambia
Sambia or Samland is a peninsula in the Kaliningrad Oblast of Russia, on the southeastern shore of the Baltic Sea. The Curonian Lagoon and the Vistula Lagoon demarcate the peninsula. Prior to 1945 it formed an important part of East Prussia.-Names:Sambia is named after the Sambians, an extinct...
(Russia
Kaliningrad Oblast
Kaliningrad Oblast is a federal subject of Russia situated on the Baltic coast. It has a population of The oblast forms the westernmost part of the Russian Federation, but it has no land connection to the rest of Russia. Since its creation it has been an exclave of the Russian SFSR and then the...
).

A second possibility is that botten follows an alternative Scandinavian connotation of 'furthermost'. Thus, the Gulf of Bothnia would be the farthest extent of the Ocean.

Julius Pokorny
Julius Pokorny
Julius Pokorny was an Austrian linguist and scholar of the Celtic languages, particularly Irish, and a supporter of Irish nationalism. He held academic posts in Austrian and German universities.-Life:...
gives the extended Indo-European
Indo-European languages
The Indo-European languages are a family of several hundred related languages and dialects, including most major current languages of Europe, the Iranian plateau, and South Asia and also historically predominant in Anatolia...
root as *bhudh-m(e)n with a *bhudh-no- variant, from which the Latin fundus, as in fundament, is derived. The original meaning of English north, from Indo-European *ner- "under", indicates an original sense of "lowlands" for "bottomlands". On the other hand, by "north" the classical authors usually meant "outermost", as the northern lands were outermost to them.

The origin of the word is indeed very ancient, belonging to a period before the world discoveries by the Portuguese. Until then, North was not seen as the magnetic top of the world, East being the normal orientation of a map
Map
A map is a visual representation of an area—a symbolic depiction highlighting relationships between elements of that space such as objects, regions, and themes....
.

Also, in Saami, the cardinal directions were named according to the different parts of the typical tent used by this nomadic people. The door of the tent was traditionally pointed South, in the most sunny direction, and the bottom of the tent would be aligned with the North. Thus the origin of the word 'Pohja' in its use as "North". Deriving as well from this logic is the affinity in the Finnish language of the words 'eteinen', meaning "hall" and 'Etelä', "South".


From Simpnäsklubb (59°54'N) in Sweden, to Flötjan, Lagskær, Fæstörne, Kökarsörn, and Vænö-Kalkskær to the SW point of Hangöudde (Hangö Head, 59°49'N) in Finland, thus including the Aland islands
Åland Islands
The Åland Islands form an archipelago in the Baltic Sea. They are situated at the entrance to the Gulf of Bothnia and form an autonomous, demilitarised, monolingually Swedish-speaking region of Finland...
and adjacent shoals and channels in the Gulf of Bothnia. 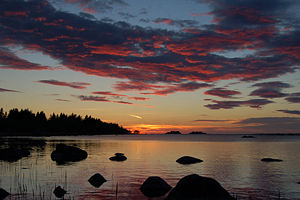 The gulf is 725 km (450 mi) long, 80–240 km (50-150 mi) wide and has an average depth of 60 m (200 ft, 33 fathom
Fathom
A fathom is a unit of length in the imperial and the U.S. customary systems, used especially for measuring the depth of water.There are 2 yards in an imperial or U.S. fathom...
s). The maximum depth is 295 m (965 ft, 161 fathoms). The surface area is 117,000 km² (45,200 sq mi). The northernmost point is situated in Töre
Töre
Töre is a locality situated in Kalix Municipality, Norrbotten County, Sweden with 1,146 inhabitants in 2005.Its harbour is the northernmost of the Bothnian Bay that is accessible to commercial vessels. The European route E10 passes through Töre.- References :...
in the Bothnian Bay
Bothnian Bay
The Bothnian Bay or Bay of Bothnia is the most northern part of the Gulf of Bothnia, the northern part of the Baltic Sea. Its northernmost point is situated in Töre...
.

Some historians suggest that the adventurer Ottar was referring to the Gulf of Bothnia when he spoke of the Kven Sea
Kven Sea
Kven Sea is mentioned as the northern border for the ancient Germany in the "The Old English Orosius", the history of the world published in England in 890 CE with a commission from King Alfred the Great himself...
in the 9th century. It is also possible that Claudius Clavus's usage of the term Mare Gotticus in the 15th century refers to the Gulf of Bothnia.

The land surrounding the Gulf of Bothnia is heavily forested. Trees are logged, then transported to the coast for milling.