Encyclopedia
The polyynes are a group of organic compound
Organic compound
An organic compound is any member of a large class of gaseous, liquid, or solid chemical compounds whose molecules contain carbon. For historical reasons discussed below, a few types of carbon-containing compounds such as carbides, carbonates, simple oxides of carbon, and cyanides, as well as the...
s with alternating single and triple bonds
Covalent bond
A covalent bond is a form of chemical bonding that is characterized by the sharing of pairs of electrons between atoms. The stable balance of attractive and repulsive forces between atoms when they share electrons is known as covalent bonding....
. The simplest example is diacetylene
Diacetylene
Diacetylene , with the formula C4H2, is a highly unsaturated hydrocarbon that contains three single bonds and two triple bonds. It is the first in the series of polyynes.-Occurrence:...
or buta-1,3-diyne, HC≡C-C≡CH. 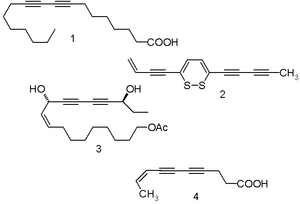 Naturally occurring polyynes exist, and many are associated with medicinal
Medicine
Medicine is the science and art of healing. It encompasses a variety of health care practices evolved to maintain and restore health by the prevention and treatment of illness....
properties. The acetylenic fatty acid 1 (scheme 1) is isolated from the root bark of the legume Paramacrolobium caeruleum of the Showy Mistletoe
Mistletoe
Mistletoe is the common name for obligate hemi-parasitic plants in several families in the order Santalales. The plants in question grow attached to and within the branches of a tree or shrub.-Mistletoe in the genus Viscum:...
(Loranthaceae
Loranthaceae
Loranthaceae is a family of flowering plants, which has been universally recognized by taxonomists. It consists of about 75 genera and 1,000 species of woody plants, many of them hemi-parasites, all of them except three having the mistletoe habit...
) family. The stems and leaves of members of this family have been used for the treatment of cancer
Cancer
Cancer , known medically as a malignant neoplasm, is a large group of different diseases, all involving unregulated cell growth. In cancer, cells divide and grow uncontrollably, forming malignant tumors, and invade nearby parts of the body. The cancer may also spread to more distant parts of the...
in Indonesia
Indonesia
Indonesia , officially the Republic of Indonesia , is a country in Southeast Asia and Oceania. Indonesia is an archipelago comprising approximately 13,000 islands. It has 33 provinces with over 238 million people, and is the world's fourth most populous country. Indonesia is a republic, with an...
.

The naturally occurring pigment
Pigment
A pigment is a material that changes the color of reflected or transmitted light as the result of wavelength-selective absorption. This physical process differs from fluorescence, phosphorescence, and other forms of luminescence, in which a material emits light.Many materials selectively absorb...
thiarubrine B (2) has been isolated from the Giant Ragweed (Ambrosia trifida). Plants containing this type of compound have been used to treat skin infections and intestinal parasites by native people in Africa
Africa
Africa is the world's second largest and second most populous continent, after Asia. At about 30.2 million km² including adjacent islands, it covers 6% of the Earth's total surface area and 20.4% of the total land area...
and Canada
Canada
Canada is a North American country consisting of ten provinces and three territories. Located in the northern part of the continent, it extends from the Atlantic Ocean in the east to the Pacific Ocean in the west, and northward into the Arctic Ocean...
.

The inner bark and roots of Devil's club
Devil's Club
Devil's Club is a large shrub primarily native to the cool moist forests of western North America, but also disjunct on islands in Lake Superior. It is noted for its large palmate leaves and erect, woody stems covered in brittle spines...
(Oplopanax horridus) is used by native Americans to treat a variety of ailments. One of the polyynes isolated is oplopandiolacetate (3). Dihydromatricaria acid (4) is a polyyne obtained from the soldier beetle
Soldier beetle
The soldier beetles, Cantharidae, are relatively soft-bodied, straight-sided beetles, related to the Lampyridae or firefly family, but being unable to produce light. They are cosmopolitan in distribution. One common British species is bright red, reminding people of the red coats of soldiers, hence...
. Other polyynes from plant
Plant
Plants are living organisms belonging to the kingdom Plantae. Precise definitions of the kingdom vary, but as the term is used here, plants include familiar organisms such as trees, flowers, herbs, bushes, grasses, vines, ferns, mosses, and green algae. The group is also called green plants or...
s include oenanthotoxin, cicutoxin, and falcarinol.

The octatetraynyl radical
Octatetraynyl radical
Octatetraynyl radical is an organic free radical with eight carbon atoms linked in a chain with alternating single bonds and triple bonds....
s and hexatriynyl radical
Hexatriynyl radical
The hexatriynyl radical, C6H, is an organic radical molecule consisting of a chain of six carbon atoms terminated by a hydrogen.The unpaired electron is located at the opposite end to the hydrogen atom, as indicated. Both experimental work and computer simulations on this species was done in the...
s together with their ions are detected in space where Hydrogen is rare. See Astrochemistry
Astrochemistry
Astrochemistry is the study of the abundance and reactions of chemical elements and molecules in the universe, and their interaction with radiation. The discipline is an overlap of astronomy and chemistry. The word "astrochemistry" may be applied to both the Solar System and the interstellar medium...
.
The source of this article is wikipedia, the free encyclopedia.  The text of this article is licensed under the GFDL.