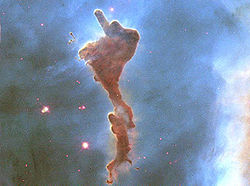 Molecular hydrogen is difficult to detect by infrared and radio observations, so the molecule most often used to determine the presence of H2 is CO (carbon monoxide
Carbon monoxide
Carbon monoxide , also called carbonous oxide, is a colorless, odorless, and tasteless gas that is slightly lighter than air. It is highly toxic to humans and animals in higher quantities, although it is also produced in normal animal metabolism in low quantities, and is thought to have some normal...
). The ratio between CO luminosity
Luminosity
Luminosity is a measurement of brightness.-In photometry and color imaging:In photometry, luminosity is sometimes incorrectly used to refer to luminance, which is the density of luminous intensity in a given direction. The SI unit for luminance is candela per square metre.The luminosity function...
and H2 mass
Mass
Mass can be defined as a quantitive measure of the resistance an object has to change in its velocity.In physics, mass commonly refers to any of the following three properties of matter, which have been shown experimentally to be equivalent:...
is thought to be constant, although there are reasons to doubt this assumption in observations of some other galaxies. 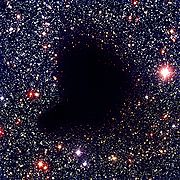 Within our own galaxy
Milky Way
The Milky Way is the galaxy that contains the Solar System. This name derives from its appearance as a dim un-resolved "milky" glowing band arching across the night sky...
, molecular gas accounts for less than one percent of the volume of the interstellar medium
Interstellar medium
In astronomy, the interstellar medium is the matter that exists in the space between the star systems in a galaxy. This matter includes gas in ionic, atomic, and molecular form, dust, and cosmic rays. It fills interstellar space and blends smoothly into the surrounding intergalactic space...
(ISM), yet it is also the densest part of the medium comprising roughly one-half of the total gas mass interior to the Sun
Sun
The Sun is the star at the center of the Solar System. It is almost perfectly spherical and consists of hot plasma interwoven with magnetic fields...
's galactic orbit. The bulk of the molecular gas is contained in a molecular ring between 3.5 to 7.5 kiloparsec
Parsec
The parsec is a unit of length used in astronomy. It is about 3.26 light-years, or just under 31 trillion kilometres ....
s from the center of the galaxy (the Sun is about 8.5 kiloparsecs from the center). Large scale carbon monoxide maps of the galaxy show that the position of this gas correlates with the spiral arms of the galaxy. That molecular gas occurs predominantly in the spiral arms argues that molecular clouds must form and dissociate on a timescale shorter than 10 million years—the time it takes for material to pass through the arm region.

Vertically, the molecular gas inhabits the narrow midplane of the Galactic disc with a characteristic scale height
Scale height
In various scientific contexts, a scale height is a distance over which a quantity decreases by a factor of e...
, Z, of approximately 50–75 parsec, much thinner than the warm atom
Atom
The atom is a basic unit of matter that consists of a dense central nucleus surrounded by a cloud of negatively charged electrons. The atomic nucleus contains a mix of positively charged protons and electrically neutral neutrons...
ic (Z=130–400 pc) and warm ion
Ion
An ion is an atom or molecule in which the total number of electrons is not equal to the total number of protons, giving it a net positive or negative electrical charge. The name was given by physicist Michael Faraday for the substances that allow a current to pass between electrodes in a...
ized (Z=1000 pc) gaseous components of the ISM. The exception to the ionized gas distribution are HII regions which are bubbles of hot ionized gas created in molecular clouds by the intense radiation given off by young massive stars
OB star
OB stars are hot, massive stars of spectral types O or B which form in loosely organized groups called OB associations. They are short lived, and thus don't move very far from where they were formed within their life. During their lifetime, they will emit copious amounts of ultraviolet radiation...
and as such they have approximately the same vertical distribution as the molecular gas.

This smooth distribution of molecular gas is averaged out over large distances; however, the small scale distribution of the gas is highly irregular with most of it concentrated in discrete clouds and cloud complexes.

A vast assemblage of molecular gas with a mass of 104–106 times the mass of the Sun is called a giant molecular cloud (GMC). GMCs are 50–300 light-year
Light-year
A light-year, also light year or lightyear is a unit of length, equal to just under 10 trillion kilometres...
s in diameter (approx 15–92 parsecs). Whereas the average density in the solar vicinity is one particle per cubic centimetre, the average density of a GMC is 102–103 particles per cubic centimetre. Although the Sun is much denser than a GMC, the volume of a GMC is so great that it contains 100,000 to 10,000,000 times as much mass as the Sun. The substructure of a GMC is a complex pattern of filaments, sheets, bubbles, and irregular clumps.

GMCs are so large that "local" ones can cover a significant fraction of a constellation; thus they are often referred to by the name of that constellation, e.g. the Orion Molecular Cloud
Orion Molecular Cloud Complex
The Orion Molecular Cloud Complex refers to a large group of bright nebula, dark clouds, and young stars located in the constellation of Orion. The cloud itself is between 1,500 and 1,600 light-years away and is hundreds of light-years across...
(OMC) or the Taurus Molecular Cloud (TMC). These local GMCs are arrayed in a ring in the neighborhood of the Sun coinciding with the Gould Belt
Gould Belt
The Gould Belt is a partial ring of stars in the Milky Way galaxy, about 3000 light years across, tilted toward the galactic plane by about 16 to 20 degrees. It contains many spectral class O- and B-type stars, and may represent the local spiral arm to which the Sun belongs—currently the Sun is...
. The most massive collection of molecular clouds in the galaxy forms an asymmetrical ring around the galactic center at a radius of 120 parsecs; the largest component of this ring is the Sagittarius B2
Sagittarius B2
Sagittarius B2 is a giant molecular cloud of gas and dust that is located about from the center of the Milky Way. This complex is the largest molecular cloud in the vicinity of the core and one of the largest in the galaxy, spanning a region about across. The total mass of Sgr B2 is about 3...
complex. The Sagittarius region is chemically rich and is often used as an exemplar by astronomers searching for new molecules in interstellar space.

Isolated gravitationally bound small molecular clouds with masses less than a few hundred times the mass of the Sun are called Bok globule
Bok globule
Bok globules are dark clouds of dense cosmic dust and gas in which star formation sometimes takes place. Bok globules are found within H II regions, and typically have a mass of about 2 to 50 solar masses contained within a region about a light year or so across...
s. The densest parts of small molecular clouds are equivalent to the molecular cores found in GMCs and are often included in the same studies.

In 1984 IRAS
IRAS
The Infrared Astronomical Satellite was the first-ever space-based observatory to perform a survey of the entire sky at infrared wavelengths....
identified a new type of diffuse molecular cloud. These were diffuse filamentary clouds that are visible at high galactic latitudes
Galactic coordinate system
The galactic coordinate system is a celestial coordinate system which is centered on the Sun and is aligned with the apparent center of the Milky Way galaxy. The "equator" is aligned to the galactic plane...
(looking out of the plane of the galactic disc). These clouds would have a typical density of 30 particles per cubic centimeter.

The general hypothesis is that the creation of newborn star
Star
A star is a massive, luminous sphere of plasma held together by gravity. At the end of its lifetime, a star can also contain a proportion of degenerate matter. The nearest star to Earth is the Sun, which is the source of most of the energy on Earth...
s occurs exclusively within molecular clouds.
This is a natural consequence of their low temperatures and high densities, since the gravitational force acting to collapse the cloud may exceed the internal pressures that are acting "outward" to prevent a collapse. Also there is observed evidence that the large, star-forming clouds are confined to a large degree by their own gravity (like stars, planets, and galaxies) rather than external pressure (like clouds in the sky).
The evidence comes from the fact that the "turbulent" velocities inferred from CO linewidth scale in the same manner as the orbital velocity (a virial relation).

The physics of molecular clouds are poorly understood and much debated.
Their internal motions are governed by turbulence
Turbulence
In fluid dynamics, turbulence or turbulent flow is a flow regime characterized by chaotic and stochastic property changes. This includes low momentum diffusion, high momentum convection, and rapid variation of pressure and velocity in space and time...
in a cold, magnetized
Magnetism
Magnetism is a property of materials that respond at an atomic or subatomic level to an applied magnetic field. Ferromagnetism is the strongest and most familiar type of magnetism. It is responsible for the behavior of permanent magnets, which produce their own persistent magnetic fields, as well...
gas, for which the turbulent motions are highly supersonic
Supersonic
Supersonic speed is a rate of travel of an object that exceeds the speed of sound . For objects traveling in dry air of a temperature of 20 °C this speed is approximately 343 m/s, 1,125 ft/s, 768 mph or 1,235 km/h. Speeds greater than five times the speed of sound are often...
but comparable to the speeds of magnetic disturbances. This state is thought to lose energy rapidly, requiring either an overall collapse or a steady reinjection of energy.
At the same time, the clouds are known to be disrupted by some process—most likely the effects of massive stars—before a significant fraction of their mass has become stars.