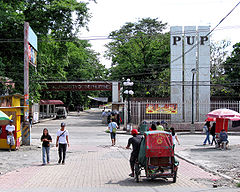 The Polytechnic University of the Philippines (Filipino
Filipino language
This move has drawn much criticism from other regional groups.In 1987, a new constitution introduced many provisions for the language.Article XIV, Section 6, omits any mention of Tagalog as the basis for Filipino, and states that:...
: Politeknikong Unibersidad ng Pilipinas) commonly known as PUP is a public
Public university
A public university is a university that is predominantly funded by public means through a national or subnational government, as opposed to private universities. A national university may or may not be considered a public university, depending on regions...
research
Research
Research can be defined as the scientific search for knowledge, or as any systematic investigation, to establish novel facts, solve new or existing problems, prove new ideas, or develop new theories, usually using a scientific method...
university in the Philippines
Philippines
The Philippines , officially known as the Republic of the Philippines , is a country in Southeast Asia in the western Pacific Ocean. To its north across the Luzon Strait lies Taiwan. West across the South China Sea sits Vietnam...
. It was founded on October 19, 1904 as the Manila Business School, offering commerce-related courses. The university offers graduate and undergraduate degrees in accountancy
Accountancy
Accountancy is the process of communicating financial information about a business entity to users such as shareholders and managers. The communication is generally in the form of financial statements that show in money terms the economic resources under the control of management; the art lies in...
, engineering
Engineering
Engineering is the discipline, art, skill and profession of acquiring and applying scientific, mathematical, economic, social, and practical knowledge, in order to design and build structures, machines, devices, systems, materials and processes that safely realize improvements to the lives of...
, political science
Political science
Political Science is a social science discipline concerned with the study of the state, government and politics. Aristotle defined it as the study of the state. It deals extensively with the theory and practice of politics, and the analysis of political systems and political behavior...
, social science, business
Business
A business is an organization engaged in the trade of goods, services, or both to consumers. Businesses are predominant in capitalist economies, where most of them are privately owned and administered to earn profit to increase the wealth of their owners. Businesses may also be not-for-profit...
, arts
ARts
aRts, which stands for analog Real time synthesizer, is an audio framework that is no longer under development. It is best known for previously being used in KDE to simulate an analog synthesizer....
, agriculture
Agriculture
Agriculture is the cultivation of animals, plants, fungi and other life forms for food, fiber, and other products used to sustain life. Agriculture was the key implement in the rise of sedentary human civilization, whereby farming of domesticated species created food surpluses that nurtured the...
, media and communication
Communication
Communication is the activity of conveying meaningful information. Communication requires a sender, a message, and an intended recipient, although the receiver need not be present or aware of the sender's intent to communicate at the time of communication; thus communication can occur across vast...
and associate programs.

In October 2004, PUP celebrated its 100th year anniversary. The theme of the centennial celebration was "PUP: Kabalikat ng Pamahalaan sa Pag-angat ng Antas ng Kabuhayan ng Mamamayan." As part of the celebration, and to highlight the signing of the Declaration of Peace to be put before the United Nations
United Nations
The United Nations is an international organization whose stated aims are facilitating cooperation in international law, international security, economic development, social progress, human rights, and achievement of world peace...
, the PUP System break the record ofWorld's Largest Human Rainbow
Human rainbow
A human rainbow is where a group of people form a pattern on the ground by placing themselves in the typical characteristics of a rainbow. For example wearing the colours red, orange, yellow, green, blue, indigo, violet and forming a rainbow arch at the same time. Some human rainbows are formed in...
31,000 students, faculty, staff and alumni

The main campus is located at Santa Mesa
Santa Mesa, Manila
Santa Mesa is one of the 16 geographical districts of the city of Manila, which is primarily a residential, commercial and educational center. Santa Mesa is bounded by several districts and cities...
, Manila
Manila
Manila is the capital of the Philippines. It is one of the sixteen cities forming Metro Manila.Manila is located on the eastern shores of Manila Bay and is bordered by Navotas and Caloocan to the north, Quezon City to the northeast, San Juan and Mandaluyong to the east, Makati on the southeast,...
, along the Pasig River
Pasig River
The Pasig River is a river in the Philippines that connects Laguna de Bay to Manila Bay. Stretching for , it is lined by Metro Manila on each side...
. The PUP Manila consists of three sub-campuses named Mabini, NDC and M.H. del Pilar. The house where Mabini died is now located in the campus of the Polytechnic University of the Philippines. The simple nipa
Nypa fruticans
Nypa fruticans, known as the attap palm , nipa palm , and mangrove palm or buah atap , buah nipah , dừa nước , Ging Pol in Sinhala in Sri Lanka and gol pata , dani . It is the only palm considered a mangrove in the Mangroves Biome...
house retains the original furniture, and some of the books he wrote, and also contains souvenir items, while hosting the municipal library and reading facilities, hence, the main campus is named after Mabini. Some campuses are located on the other side of the metropolis and the rest are located across the country.

The academic units of the University are called college
College
A college is an educational institution or a constituent part of an educational institution. Usage varies in English-speaking nations...
s or institute
Institute
An institute is a permanent organizational body created for a certain purpose. Often it is a research organization created to do research on specific topics...
s. These units offer undergraduate degrees and/or postgraduate diplomas on their specific fields of specialization.

College of Computer Management and Information Technology abbreviated as CCMIT is an academic unit of the Polytechnic University of the Philippines that specializes in computer science and information technology. The college is located on the third floor, south wing of the main building Santa Mesa, Manila
Santa Mesa, Manila
Santa Mesa is one of the 16 geographical districts of the city of Manila, which is primarily a residential, commercial and educational center. Santa Mesa is bounded by several districts and cities...
(Main) Campus.


College of Economics, Finance, and Politics

College of Languages and Linguistics 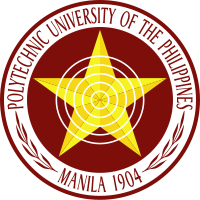 The star in the logo stands for the perfection of the human person as well as the search for truth, while the five concentric circles depict infinite wisdom.

Both the five-pointed star and the five concentric circles stand for quintessence, meaning the highest form of quality or the most perfect example of creation.

The star is golden yellow not only because this is a star’s natural color but also because, together with the dark maroon used as background, it is the traditional color of the University.

The five concentric circles are white because it symbolizes purity.

In 1974, the sculpture (cut and welded brass mural relief, 2.5 x 9.3 meters) was built by national artist Eduardo Castrillo. The theme of the artwork is Consolidated Growth through Education - the role of PUP in the educational development of the youth in preparation for their involvement in nation building. The mural illustrates the social, economic, industrial, technological, and cultural aspect of life with which man blends himself to develop an environment necessary to the progress of the nation.

The mural is located at the main gate of the University Mabini Campus. The brass sculpture depicts the purposeful growth of the Filipino youth. It also signifies the role and responsibility of the youth in the progress and development of the nation, which the University recognizes. As an institution dutifully concerned in shaping the lives of the youth, the University pays tribute to the hope and builder of the world tomorrow through this artistic interpretation.

The Obelisk, standing majestic on its base, depicts the strength of the Polytechnic University of the Philippines as an institution of higher learning, promoting educational and moral aims which are fortified by a determined leadership with a clear vision for the Filipino youth and an efficient support system inspired by the virtues of public service.

With a long-standing reputation as a vanguard of truth and social justice, PUP also pays homage to the Great Conscience and Brain of the Philippine Revolution, Apolinario Mabini who reflects everything the University upholds especially its mission of public enlightenment.

On top is the University Star Logo , symbol of PUP’s image as the Light of the Nation. It stands for the perfection of the human person and the search for truth. Its five concentric circles represent infinite wisdom and each point of the star signifies integrity, ingenuity, industry, intelligence and internationalism – the core values of PUP as a Total University.

Dedicated to the future, the obelisk stands here and now as an emblem of strength and greatness that only time can change.

This masterpiece is built by designer and architect Lor Calma in the year 2000. It depicts the dynamic transformation of the University as it embraces the power of Information and Communications Technology.

The sculpture is located at the main lobby of the Ninoy Aquino Learning Resources Center, near the PUP ICT Center.

With the artwork is an inscription that says:
"This sculpture is dedicated to the students, faculty, academic and administrative personnel, and the management of the Polytechnic University of the Philippines for their excellence, innovativeness, and unrelenting pursuit of the highest ideals of academic standards in the field of Information and Communication Technology under the leadership and inspiration of Dr. Ofelia M. Carague."

The Centenary Logo is an emblem of a noble and glorious past, a living testimony to the University population’s adherence to the beautiful traits of loyalty, integrity, love of peace, commitment to service, and undying love of and devotion to God - essential attributes in the pursuit of academic excellence and progress in a span of one hundred years (1904-2004).

Standing for the wheel of life is the circle which moves incessantly to give life to all members of the academic community - the administrators, the professoriate, the non-academic personnel, and the studentry - walking hand in hand, regardless of status in life, looking forward to a resplendent life-giving future. As it is, the wheel of life converges with Information and Communications Technology.

The laurel leaves inside the circle embody good health, peace, harmony, and prosperity within the ambit of PUP and the global village where the inhabitants meet as they communicate the same ideals, ideas, and aspirations.

Within the centenary logo is the PUP logo which speaks eloquently of PUP’s vital role in molding minds, enriching souls, and giving firmer grounds to stand on.

From the circle emanate three big arrows which stand for the rapid growth of high-tech education in all levels. The University is now cited as the Center of Development in different disciplines, especially Information and Communications Technology.

From the Philippine Flag spring red and blue bands - a symbol of the PUP community’s respect for nationalism and Filipinism, strengthened by the PUPians’ role in nation-building, courageous outlook, tenacity and contribution to economic progress.

The rising sun emerges through the yellow color imbibing the vision, mission, and goals of PUP and its endless search for truth, excellence, quality, compassion, efficiency and effectiveness as it tackles the functions of a University - instruction, research, extension, and production.

Ten small arrows spring from the circle to herald the University’s concern for people from all walks of life, through the service and commitment in seven branches and three campuses throughout the nation.