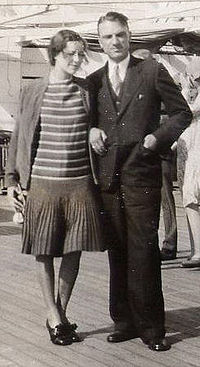 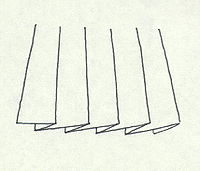 A pleat is a type of fold formed by doubling fabric
Textile
A textile or cloth is a flexible woven material consisting of a network of natural or artificial fibres often referred to as thread or yarn. Yarn is produced by spinning raw fibres of wool, flax, cotton, or other material to produce long strands...
back upon itself and securing it in place. It is commonly used in clothing
Clothing
Clothing refers to any covering for the human body that is worn. The wearing of clothing is exclusively a human characteristic and is a feature of nearly all human societies...
and upholstery
Upholstery
Upholstery is the work of providing furniture, especially seats, with padding, springs, webbing, and fabric or leather covers. The word upholstery comes from the Middle English word upholder, which referred to a tradesman who held up his goods. The term is equally applicable to domestic,...
to gather a wide piece of fabric to a narrower circumference.

Pleats are categorized as pressed, that is, ironed
Ironing
Ironing is the use of a heated tool to remove wrinkles from fabric. The heating is commonly done to a temperature of 180-220 °Celsius, depending on the fabric. Ironing works by loosening the bonds between the long-chain polymer molecules in the fibers of the material...
or otherwise heat-set into a sharp crease, or unpressed, falling in soft rounded folds.

Pleats sewn into place are called tucks
Tuck (sewing)
In sewing, a tuck is a fold or pleat in fabric that is sewn in place.Small tucks, especially multiple parallel tucks, may be used to decorate clothing or household linens...
.

Clothing features pleats for practical reasons (to provide freedom of movement to the wearer) as well as for purely stylistic reasons.

Shirts
Dress shirt
A shirt, or dress shirt in American English, is a garment with a collar, a full-length opening at the front from the collar to the hem, and sleeves with cuffs. Shirts are predominantly used by men, since women usually wear blouses...
and blouse
Blouse
A blouse is a loose-fitting upper garment that was formerly worn by workmen, peasants, artists, women and children. It is typically gathered at the waist so that it hangs loosely over the wearer's body. Today, the word most commonly refers to a woman's shirt but can also refer to a man's shirt if...
s typically have pleats on the back to provide freedom of movement and on the arm where the sleeve tapers to meet the cuff. The standard men's shirt has a box pleat in the center of the back just below the shoulder or alternately one simple pleat on each side of the back.

Jacket
Jacket
A jacket is a hip- or waist-length garment for the upper body. A jacket typically has sleeves, and fastens in the front. A jacket is generally lighter, tighter-fitting, and less insulating than a coat, which is outerwear...
s designed for active outdoor wear frequently have pleats (usually inverted box pleats) to allow for freedom of movement. Norfolk jacket
Norfolk jacket
A Norfolk jacket is a loose, belted, single-breasted jacket with box pleats on the back and front, with a belt or half-belt. The style was long popular for boys' jackets and suits, and is still used in some uniforms. It was originally designed as a shooting coat that did not bind when the elbow...
s have double-ended inverted box pleats at the chest and back.

Skirts, dresses and kilt
Kilt
The kilt is a knee-length garment with pleats at the rear, originating in the traditional dress of men and boys in the Scottish Highlands of the 16th century. Since the 19th century it has become associated with the wider culture of Scotland in general, or with Celtic heritage even more broadly...
s can include pleats of various sorts to add fullness from the waist or hips, or at the hem, to allow freedom of movement or achieve design effects.

Pleats just below the waistband on the front of the garment are typical of many styles of formal and casual trousers
Trousers
Trousers are an item of clothing worn on the lower part of the body from the waist to the ankles, covering both legs separately...
including suit
Suit (clothing)
In clothing, a suit is a set of garments made from the same cloth, consisting of at least a jacket and trousers. Lounge suits are the most common style of Western suit, originating in the United Kingdom as country wear...
trousers and khakis. There may be one, two, three, or no pleats, which may face either direction. When the pleats open towards the pockets they are called reverse pleats (typical of khakis and corduroy trousers) and when they open toward the zipper, they are known as forward pleats.

Utilitarian or very casual styles such as jeans
Jeans
Jeans are trousers made from denim. Some of the earliest American blue jeans were made by Jacob Davis, Calvin Rogers, and Levi Strauss in 1873. Starting in the 1950s, jeans, originally designed for cowboys, became popular among teenagers. Historic brands include Levi's, Lee, and Wrangler...
and cargo pants
Cargo pants
Cargo pants are loosely-cut pants designed for tough, outdoor activities distinguished by multiple cargo pockets.A cargo pocket is a form patch pocket with accordion folds for increased capacity closed with a flap secured by snap, button, or Velcro common on battledress and hunting clothing.Cargo...
are flat-front (without pleats at the waistband) but may have bellows pockets.

A bellows pocket is patch pocket
Pocket
A pocket is a bag- or envelope-like receptacle either fastened to or inserted in an article of clothing to hold small items. Pockets may also be attached to luggage, backpacks, and similar items...
with an inset box pleat to allow the pocket to expand when filled. Bellows pockets are typical of cargo pants, safari jacket
Safari jacket
A safari jacket or bush jacket is a garment originally designed for the purpose of going on safari in the African bush.Popularized by turn-of-the-20th-century Anglo-African adventurers, safari-style jackets were engineered for comfort and function....
s, and other utilitarian garments.