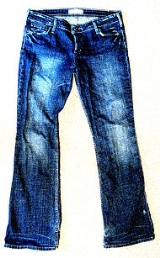 Overview
Jeans are trousers
Trousers
Trousers are an item of clothing worn on the lower part of the body from the waist to the ankles, covering both legs separately...
made from denim
Denim
Denim is a rugged cotton twill textile, in which the weft passes under two or more warp threads. This produces the familiar diagonal ribbing identifiable on the reverse of the fabric, which distinguishes denim from cotton duck. Denim has been in American usage since the late 18th century...
. Some of the earliest American blue jeans were made by Jacob Davis, Calvin Rogers, and Levi Strauss
Levi Strauss
Levi Strauss was a German-Jewish immigrant to the United States who founded the first company to manufacture blue jeans. His firm, Levi Strauss & Co., began in 1853 in San Francisco, California.-Origins:...
in 1873. Starting in the 1950s, jeans, originally designed for cowboys, became popular among teenagers. Historic brands include Levi's, Lee
Lee (Jeans)
Lee is a brand of denim jeans, first produced in 1889 in Salina, Kansas. The company is owned by VF Corporation, the largest apparel company in the world. Its headquarters is currently in Merriam, Kansas, just outside of Kansas City, Missouri...
, and Wrangler
Wrangler Jeans
Wrangler is a manufacturer of jeans and other clothing items. The brand is owned by the VF Corporation, who also own Lee, JanSport and The North Face, among others. Its headquarters is in downtown Greensboro, North Carolina, with production plants in a variety of locations throughout the world...
. Jeans come in various fits, including skinny
Skinny jeans
Slim-fit pants or skinny jeans have a snug fit through the legs and end in a small leg opening that can be anywhere from 9" to 20" depending on size. Other names for this style include pegs, drainpipes, stovepipes, Asian tight-pants, cigarette pants, skinny pants,insolent pants or skinnies...
, tapered, straight, boot cut, Mommy-cut, maternity, and flare.

Jeans are now a very popular form of casual dress around the world, and have been so for decades.