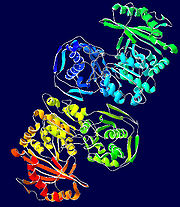 Phosphoglucomutase is an enzyme
Enzyme
Enzymes are proteins that catalyze chemical reactions. In enzymatic reactions, the molecules at the beginning of the process, called substrates, are converted into different molecules, called products. Almost all chemical reactions in a biological cell need enzymes in order to occur at rates...
that transfers a phosphate group on an α-D-glucose
Glucose
Glucose is a simple sugar and an important carbohydrate in biology. Cells use it as the primary source of energy and a metabolic intermediate...
monomer
Monomer
A monomer is an atom or a small molecule that may bind chemically to other monomers to form a polymer; the term "monomeric protein" may also be used to describe one of the proteins making up a multiprotein complex...
from the 1' to the 6' position in the forward direction or the 6' to the 1' position in the reverse direction.

More precisely, it facilitates the interconversion of glucose 1-phosphate and glucose 6-phosphate.

After glycogen phosphorylase
Glycogen phosphorylase
Glycogen phosphorylase is one of the phosphorylase enzymes . Glycogen phosphorylase catalyzes the rate-limiting step in the degradation of glycogen in animals by releasing glucose-1-phosphate from the terminal alpha-1,4-glycosidic bond...
catalyzes the phosphorolytic cleavage of a glucosyl residue from the glycogen
Glycogen
Glycogen is a molecule that serves as the secondary long-term energy storage in animal and fungal cells, with the primary energy stores being held in adipose tissue...
polymer
Polymer
A polymer is a large molecule composed of repeating structural units. These subunits are typically connected by covalent chemical bonds...
, the freed glucose has a phosphate
Phosphate
A phosphate, an inorganic chemical, is a salt of phosphoric acid. In organic chemistry, a phosphate, or organophosphate, is an ester of phosphoric acid. Organic phosphates are important in biochemistry and biogeochemistry or ecology. Inorganic phosphates are mined to obtain phosphorus for use in...
group on its 1-carbon. This glucose 1-phosphate molecule
Molecule
A molecule is an electrically neutral group of at least two atoms held together by covalent chemical bonds. Molecules are distinguished from ions by their electrical charge...
is not itself a useful metabolic intermediate, but phosphoglucomutase catalyzes the conversion of this glucose 1-phosphate to glucose 6-phosphate (see below for the mechanism of this reaction).

Glucose 6-phosphate’s metabolic fate depends on the needs of the cell
Cell (biology)
The cell is the basic structural and functional unit of all known living organisms. It is the smallest unit of life that is classified as a living thing, and is often called the building block of life. The Alberts text discusses how the "cellular building blocks" move to shape developing embryos....
at the time it is generated. If the cell is low on energy, then glucose 6-phosphate will travel down the glycolytic pathway
Glycolysis
Glycolysis is the metabolic pathway that converts glucose C6H12O6, into pyruvate, CH3COCOO− + H+...
, eventually yielding two molecules of adenosine triphosphate
Adenosine triphosphate
Adenosine-5'-triphosphate is a multifunctional nucleoside triphosphate used in cells as a coenzyme. It is often called the "molecular unit of currency" of intracellular energy transfer. ATP transports chemical energy within cells for metabolism...
. If the cell is in need of biosynthetic intermediates, glucose 6-phosphate will enter the pentose phosphate pathway
Pentose phosphate pathway
The pentose phosphate pathway is a process that generates NADPH and pentoses . There are two distinct phases in the pathway. The first is the oxidative phase, in which NADPH is generated, and the second is the non-oxidative synthesis of 5-carbon sugars...
, where it will undergo a series of reactions to yield ribose
Ribose
Ribose is an organic compound with the formula C5H10O5; specifically, a monosaccharide with linear form H––4–H, which has all the hydroxyl groups on the same side in the Fischer projection....
s and/or NADPH
Nicotinamide adenine dinucleotide phosphate
Nicotinamide adenine dinucleotide phosphate, abbreviated NADP or TPN in older notation , is a coenzyme used in anabolic reactions, such as lipid and nucleic acid synthesis, which require NADPH as a reducing agent....
, depending on cellular conditions.

Phosphoglucomutase also acts in the opposite fashion when blood glucose levels are high. In this case, phosphoglucomutase catalyzes the conversion of glucose 6-phosphate (which is easily generated from glucose by the action of hexokinase
Hexokinase
A hexokinase is an enzyme that phosphorylates a six-carbon sugar, a hexose, to a hexose phosphate. In most tissues and organisms, glucose is the most important substrate of hexokinases, and glucose-6-phosphate the most important product....
) to glucose 1-phosphate.

This glucose-1-phosphate can then react with UTP to yield UDP-glucose
Uridine diphosphate glucose
Uridine diphosphate glucose is a nucleotide sugar. It is involved in glycosyltransferase reactions in metabolism.-Functions:...
in a reaction catalyzed by UDP-glucose-pyrophosphorylase. If activated by insulin
Insulin
Insulin is a hormone central to regulating carbohydrate and fat metabolism in the body. Insulin causes cells in the liver, muscle, and fat tissue to take up glucose from the blood, storing it as glycogen in the liver and muscle....
, glycogen synthase
Glycogen synthase
Glycogen synthase is an enzyme involved in converting glucose to glycogen. It takes short polymers of glucose and converts them into long polymers....
will proceed to clip the glucose from the UDP-glucose complex onto a glycogen polymer.

Phosphoglucomutase effects a phosphoryl group shift by exchanging a phosphoryl group with the substrate. Isotopic labeling
Isotopic labeling
Isotopic labeling is a technique for tracking the passage of a sample of substance through a system. The substance is 'labeled' by including unusual isotopes in its chemical composition...
experiments have confirmed that this reaction proceeds through a glucose-1,6-bisphosphate
Glucose-1,6-bisphosphate
Glucose-1,6-bisphosphate is a derivative of glucose 1-phosphate....
intermediate
Reaction intermediate
A reaction intermediate or an intermediate is a molecular entity that is formed from the reactants and reacts further to give the directly observed products of a chemical reaction. Most chemical reactions are stepwise, that is they take more than one elementary step to complete...
.

The first step in the forward reaction is the transfer of a phosphoryl group from the enzyme to glucose 1-phosphate, forming glucose-1,6-bisphosphate and leaving a dephosphorylated form of the enzyme. The enzyme then undergoes a rapid diffusional reorientation to position the 1-phosphate of the bisphosphate intermediate properly relative to the dephosphorylated enzyme. Substrate-velocity relationships and induced transport tests have revealed that the dephosphorylated enzyme then facilitates the transfer of a phosphoryl group from the glucose-1,6-bisphosphate intermediate to the enzyme, regenerating phosphorylated phosphoglucomutase and yielding glucose 6-phosphate (in the forward direction). Later structural studies confirmed that the single site in the enzyme that becomes phosphorylated and dephosphorylated is the oxygen of the active-site
Active site
In biology the active site is part of an enzyme where substrates bind and undergo a chemical reaction. The majority of enzymes are proteins but RNA enzymes called ribozymes also exist. The active site of an enzyme is usually found in a cleft or pocket that is lined by amino acid residues that...
serine
Serine
Serine is an amino acid with the formula HO2CCHCH2OH. It is one of the proteinogenic amino acids. By virtue of the hydroxyl group, serine is classified as a polar amino acid.-Occurrence and biosynthesis:...
residue (see diagram below). A bivalent metal
Metal
A metal , is an element, compound, or alloy that is a good conductor of both electricity and heat. Metals are usually malleable and shiny, that is they reflect most of incident light...
ion
Ion
An ion is an atom or molecule in which the total number of electrons is not equal to the total number of protons, giving it a net positive or negative electrical charge. The name was given by physicist Michael Faraday for the substances that allow a current to pass between electrodes in a...
, usually magnesium
Magnesium
Magnesium is a chemical element with the symbol Mg, atomic number 12, and common oxidation number +2. It is an alkaline earth metal and the eighth most abundant element in the Earth's crust and ninth in the known universe as a whole...
or cadmium
Cadmium
Cadmium is a chemical element with the symbol Cd and atomic number 48. This soft, bluish-white metal is chemically similar to the two other stable metals in group 12, zinc and mercury. Similar to zinc, it prefers oxidation state +2 in most of its compounds and similar to mercury it shows a low...
, is required for enzymatic activity and has been shown to complex directly with the phosphoryl group esterified to the active-site serine.
This formation of a glucose-1,6-bisphosphate intermediate is analogous to the interconversion of 2-phosphoglycerate and 3-phosphoglycerate catalyzed by phosphoglycerate mutase
Phosphoglycerate mutase
-Overview:Phosphoglycerate mutase is an enzyme that catalyzes step 8 of glycolysis. It catalyzes the internal transfer of a phosphate group from C-3 to C-2 which results in the conversion of 3-phosphoglycerate to 2-phosphoglycerate through a 2,3-bisphosphoglycerate intermediate.This enzyme is...
, in which 2,3-bisphosphoglycerate is generated as an intermediate.

While rabbit muscle phosphoglucomutase has served as the prototype for much of the elucidation of this enzyme's structure, newer bacterium
Bacteria
Bacteria are a large domain of prokaryotic microorganisms. Typically a few micrometres in length, bacteria have a wide range of shapes, ranging from spheres to rods and spirals...
-derived crystal structures exhibit many of the same defining characteristics. Each phosphoglucomutase monomer can be divided into four sequence domains, I-IV, based on the enzyme’s default spatial configuration (see image at right).

Each monomer comprises four distinct α/β structural units, each of which contains one of the four strands in each monomer's β-sheet
Beta sheet
The β sheet is the second form of regular secondary structure in proteins, only somewhat less common than the alpha helix. Beta sheets consist of beta strands connected laterally by at least two or three backbone hydrogen bonds, forming a generally twisted, pleated sheet...
and is made up only of the residues in a given sequence domain (see image at right). The burial of the active site (including Ser-116, the critical residue on the enzyme that is phosphorylated and dephosphorylated) in the hydrophobic
Hydrophobe
In chemistry, hydrophobicity is the physical property of a molecule that is repelled from a mass of water....
interior of the enzyme serves to exclude water from counterproductively hydrolyzing
Hydrolysis
Hydrolysis is a chemical reaction during which molecules of water are split into hydrogen cations and hydroxide anions in the process of a chemical mechanism. It is the type of reaction that is used to break down certain polymers, especially those made by condensation polymerization...
critical phosphoester bonds while still allowing the substrate to access the active site.

Human muscle contains two phosphoglucomutases with nearly identical catalytic properties, PGM I and PGM II. One or the other of these forms is missing in some humans congenitally.

PGM deficiency is an extremely rare condition that does not have a set of well-characterized physiological symptoms. This condition can be detected by an in vitro
In vitro
In vitro refers to studies in experimental biology that are conducted using components of an organism that have been isolated from their usual biological context in order to permit a more detailed or more convenient analysis than can be done with whole organisms. Colloquially, these experiments...
study of anaerobic
Anaerobic respiration
Anaerobic respiration is a form of respiration using electron acceptors other than oxygen. Although oxygen is not used as the final electron acceptor, the process still uses a respiratory electron transport chain; it is respiration without oxygen...
glycolysis which reveals a block in the pathway toward lactic acid
Lactic acid
Lactic acid, also known as milk acid, is a chemical compound that plays a role in various biochemical processes and was first isolated in 1780 by the Swedish chemist Carl Wilhelm Scheele. Lactic acid is a carboxylic acid with the chemical formula C3H6O3...
production after glucose 1-phosphate but before glucose 6-phosphate.
The source of this article is wikipedia, the free encyclopedia.  The text of this article is licensed under the GFDL.