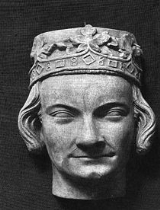 Encyclopedia
Philip III called the Bold , was the King of France, succeeding his father, Louis IX
Louis IX of France
Louis IX , commonly Saint Louis, was King of France from 1226 until his death. He was also styled Louis II, Count of Artois from 1226 to 1237. Born at Poissy, near Paris, he was an eighth-generation descendant of Hugh Capet, and thus a member of the House of Capet, and the son of Louis VIII and...
, and reigning from 1270 to 1285. He was a member of the House of Capet
House of Capet
The House of Capet, or The Direct Capetian Dynasty, , also called The House of France , or simply the Capets, which ruled the Kingdom of France from 987 to 1328, was the most senior line of the Capetian dynasty – itself a derivative dynasty from the Robertians. As rulers of France, the dynasty...
.

Born in Poissy
Poissy
Poissy is a commune in the Yvelines department in the Île-de-France in north-central France. It is located in the western suburbs of Paris from the center.In 1561 it was the site of a fruitless Catholic-Huguenot conference, the Colloquy at Poissy...
, to Louis IX
Louis IX of France
Louis IX , commonly Saint Louis, was King of France from 1226 until his death. He was also styled Louis II, Count of Artois from 1226 to 1237. Born at Poissy, near Paris, he was an eighth-generation descendant of Hugh Capet, and thus a member of the House of Capet, and the son of Louis VIII and...
(the later Saint Louis) and Margaret of Provence, Philip was prior to his accession Count of Orleans
Count of Orléans
The Count of Orléans was the ruler of an area of modern France around the city of Orléans. The title was most commonly used in the Merovingian and Carolingian eras....
. He accompanied his father on the Eighth Crusade
Eighth Crusade
The Eighth Crusade was a crusade launched by Louis IX, King of France, in 1270. The Eighth Crusade is sometimes counted as the Seventh, if the Fifth and Sixth Crusades of Frederick II are counted as a single crusade...
to Tunisia
Tunisia
Tunisia , officially the Tunisian RepublicThe long name of Tunisia in other languages used in the country is: , is the northernmost country in Africa. It is a Maghreb country and is bordered by Algeria to the west, Libya to the southeast, and the Mediterranean Sea to the north and east. Its area...
in 1270. His father died at Tunis
Tunis
Tunis is the capital of both the Tunisian Republic and the Tunis Governorate. It is Tunisia's largest city, with a population of 728,453 as of 2004; the greater metropolitan area holds some 2,412,500 inhabitants....
and there Philip was declared king at the age of 25. Philip was indecisive, soft in nature, timid, and apparently crushed by the strong personalities of his parents and dominated by his father's policies. He was called "the Bold" on the basis of his abilities in combat and on horseback and not his character. He was pious, but not cultivated. He followed the dictates of others, first of Pierre de la Broce
Pierre de la Broce
Pierre de la Broce was a royal favorite and councilor during the early part of the reign of Philip III of France....
and then of his uncle Charles I of Sicily
Charles I of Sicily
Charles I , known also as Charles of Anjou, was the King of Sicily by conquest from 1266, though he had received it as a papal grant in 1262 and was expelled from the island in the aftermath of the Sicilian Vespers of 1282...
.

After his succession, he quickly set his uncle on negotiations with the emir to conclude the crusade, while he himself returned to France. A ten-year truce was concluded and Philip was crowned in France on 12 August 1271. On 21 August, his uncle, Alfonso
Alphonse of Toulouse
Alfonso or Alphonse was the Count of Poitou from 1225 and Count of Toulouse from 1247.-Life:...
, Count of Poitou, Toulouse, and Auvergne, died returning from the crusade in Italy. Philip inherited his counties and united them to the royal demesne
Crown lands of France
The crown lands, crown estate, royal domain or domaine royal of France refers to the lands, fiefs and rights directly possessed by the kings of France...
. The portion of the Auvergne which he inherited became the "Terre royale d'Auvergne", later the Duchy of Auvergne. In accordance with Alfonso's wishes, the Comtat Venaissin
Comtat Venaissin
The Comtat Venaissin, often called the Comtat for short , is the former name of the region around the city of Avignon in what is now the Provence-Alpes-Côte d'Azur region of France. It comprised roughly the area between the Rhône, the Durance and Mont Ventoux, with a small exclave located to the...
was granted to the Pope Gregory X
Pope Gregory X
Pope Blessed Gregory X , born Tebaldo Visconti, was Pope from 1271 to 1276. He was elected by the papal election, 1268–1271, the longest papal election in the history of the Roman Catholic Church....
in 1274. Several years of negotiations yielded the Treaty of Amiens with Edward I of England
Edward I of England
Edward I , also known as Edward Longshanks and the Hammer of the Scots, was King of England from 1272 to 1307. The first son of Henry III, Edward was involved early in the political intrigues of his father's reign, which included an outright rebellion by the English barons...
in 1279. Thereby Philip restored to the English the Agenais
Agenais
Agenais, or Agenois, was a province of France located in southwest France south of Périgord.In ancient Gaul the region was the country of the Nitiobroges with Aginnum for their capital, which in the fourth century was the Civitas Agennensium, which was a part of Aquitania Secunda and which formed...
which had fallen to him with the death of Alfonso. In 1284, Philip also inherited the counties of Perche
Perche
Perche is a former province of northern France extending over the départements of Orne, Eure, Eure-et-Loir and Sarthe, which were created from Perche during the French Revolution.-Geography:...
and Alençon
Alençon
Alençon is a commune in Normandy, France, capital of the Orne department. It is situated west of Paris. Alençon belongs to the intercommunality of Alençon .-History:...
from his brother Pierre.

Philip all the while supported his uncle's policy in Italy. When, after the Sicilian Vespers
Sicilian Vespers
The Sicilian Vespers is the name given to the successful rebellion on the island of Sicily that broke out on the Easter of 1282 against the rule of the French/Angevin king Charles I, who had ruled the Kingdom of Sicily since 1266. Within six weeks three thousand French men and women were slain by...
of 1282, Peter III of Aragon
Peter III of Aragon
Peter the Great was the King of Aragon of Valencia , and Count of Barcelona from 1276 to his death. He conquered Sicily and became its king in 1282. He was one of the greatest of medieval Aragonese monarchs.-Youth and succession:Peter was the eldest son of James I of Aragon and his second wife...
invaded and took the island of Sicily, pope Martin IV excommunicated the conqueror and declared his kingdom (put under the suzerainty of the pope by Peter II
Peter II of Aragon
Peter II the Catholic was the King of Aragon and Count of Barcelona from 1196 to 1213.He was the son of Alfonso II of Aragon and Sancha of Castile...
in 1205) forfeit. He granted Aragon to Charles, Count of Valois, Philip's son. Philip intervened in the Navarrese succession after the death of Henry I of Navarre
Henry I of Navarre
Henry I the Fat was the Count of Champagne and Brie and King of Navarre from 1270...
and married his son, Philip the Fair
Philip IV of France
Philip the Fair was, as Philip IV, King of France from 1285 until his death. He was the husband of Joan I of Navarre, by virtue of which he was, as Philip I, King of Navarre and Count of Champagne from 1284 to 1305.-Youth:A member of the House of Capet, Philip was born at the Palace of...
, to the heiress of Navarre, Joan I
Joan I of Navarre
Joan I , the daughter of king Henry I of Navarre and Blanche of Artois, reigned as queen regnant of Navarre and also served as queen consort of France.-Life:...
.

In 1284, Philip and his sons entered Roussillon at the head of a large army. This war, called the Aragonese Crusade
Aragonese Crusade
The Aragonese Crusade or Crusade of Aragon, a part of the larger War of the Sicilian Vespers, was declared by Pope Martin IV against the King of Aragon, Peter III the Great, in 1284 and 1285...
from its papal sanction, has been labelled "perhaps the most unjust, unnecessary and calamitous enterprise ever undertaken by the Capetian monarchy." On 26 June 1285, Philip the Bold entrenched himself before Girona
Girona
Girona is a city in the northeast of Catalonia, Spain at the confluence of the rivers Ter, Onyar, Galligants and Güell, with an official population of 96,236 in January 2009. It is the capital of the province of the same name and of the comarca of the Gironès...
in an attempt to besiege it. The resistance was strong, but the city was taken on 7 September. Philip soon experienced a reversal, however, as the French camp was hit hard by an epidemic of dysentery
Dysentery
Dysentery is an inflammatory disorder of the intestine, especially of the colon, that results in severe diarrhea containing mucus and/or blood in the faeces with fever and abdominal pain. If left untreated, dysentery can be fatal.There are differences between dysentery and normal bloody diarrhoea...
. Philip himself was afflicted. The French retreated and were handily defeated at the Battle of the Col de Panissars
Battle of the Col de Panissars
The Battle of the Col de Panissars was fought on 30 September and 1 October 1285 between the forces of Philip III of France and Peter III of Aragón...
. The king of France himself died at Perpignan
Perpignan
-Sport:Perpignan is a rugby stronghold: their rugby union side, USA Perpignan, is a regular competitor in the Heineken Cup and seven times champion of the Top 14 , while their rugby league side plays in the engage Super League under the name Catalans Dragons.-Culture:Since 2004, every year in the...
, the capital of his ally James II of Majorca
James II of Majorca
James II was King of Majorca and Lord of Montpellier from 1276 until his death. He was the second son of James I of Aragon and his wife Violant, daughter of Andrew II of Hungary...
, and was buried in Narbonne
Narbonne
Narbonne is a commune in southern France in the Languedoc-Roussillon region. It lies from Paris in the Aude department, of which it is a sub-prefecture. Once a prosperous port, it is now located about from the shores of the Mediterranean Sea...
. He currently lies buried with his wife Isabella of Aragon
Isabella of Aragon
Isabella of Aragon , infanta of Aragon, was, by marriage, Queen consort of France in the Middle Ages from 1270 to 1271.-Life:...
in Saint Denis Basilica
Saint Denis Basilica
The Cathedral Basilica of Saint Denis is a large medieval abbey church in the commune of Saint-Denis, now a northern suburb of Paris. The abbey church was created a cathedral in 1966 and is the seat of the Bishop of Saint-Denis, Pascal Michel Ghislain Delannoy...
in Paris.
In the Divine Comedy
The Divine Comedy
The Divine Comedy is an epic poem written by Dante Alighieri between 1308 and his death in 1321. It is widely considered the preeminent work of Italian literature, and is seen as one of the greatest works of world literature...
, Dante sees Philip's spirit outside the gates of Purgatory with a number of other contemporary European rulers. Dante does not name Philip directly, but refers to him as "the small-nosed" and "the father of the Pest of France."