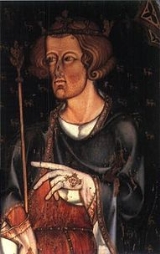 Overview
Edward I also known as Edward Longshanks and the Hammer of the Scots, was King of England from 1272 to 1307. The first son of Henry III
Henry III of England
Henry III was the son and successor of John as King of England, reigning for 56 years from 1216 until his death. His contemporaries knew him as Henry of Winchester. He was the first child king in England since the reign of Æthelred the Unready...
, Edward was involved early in the political intrigues of his father's reign, which included an outright rebellion by the English barons. In 1259, he briefly sided with a baronial reform movement, supporting the Provisions of Oxford
Provisions of Oxford
The Provisions of Oxford are often regarded as England's first written constitution ....
. After reconciliation with his father, however, he remained loyal throughout the subsequent armed conflict, known as the Second Barons' War
Second Barons' War
The Second Barons' War was a civil war in England between the forces of a number of barons led by Simon de Montfort, against the Royalist forces led by Prince Edward , in the name of Henry III.-Causes:...
.

Where on earth is the statue of edward 1 located
More

What were some of his youthful ambitions?

How did he establish his royal authority after the Crusades?

Role in the Baron's War

What kind of person was he?

1290    King Edward I of England issues the Edict of Expulsion, banishing all Jews (numbering about 16,000) from England; this was Tisha B'Av on the Hebrew calendar, a day that commemorates many Jewish calamities.

1291    Scottish nobles recognize the authority of Edward I of England.

1295    The first elected representatives from Lancashire are called to Westminster by King Edward I to attend what later became known as "The Model Parliament".

1296    Edward I sacks Berwick-upon-Tweed, during armed conflict between Scotland and England.

1296    Battle of Dunbar: The Scots are defeated by Edward I of England.

1305    William Wallace, Scottish patriot, is executed for high treason by Edward I of England.