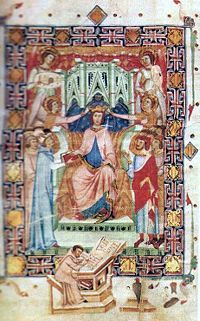 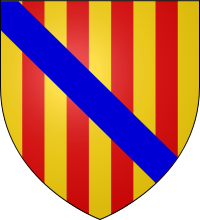 James inherited from his father a vast realm including three of the Balearic Islands
Balearic Islands
The Balearic Islands are an archipelago of Spain in the western Mediterranean Sea, near the eastern coast of the Iberian Peninsula.The four largest islands are: Majorca, Minorca, Ibiza and Formentera. The archipelago forms an autonomous community and a province of Spain with Palma as the capital...
(Majorca, Ibiza
Ibiza
Ibiza or Eivissa is a Spanish island in the Mediterranean Sea 79 km off the coast of the city of Valencia in Spain. It is the third largest of the Balearic Islands, an autonomous community of Spain. With Formentera, it is one of the two Pine Islands or Pityuses. Its largest cities are Ibiza...
and Formentera
Formentera
Formentera is the smaller and more southerly island of the Pine Islands group , which belongs to the Balearic Islands autonomous community .-Geography:...
), the counties of Roussillon and Cerdanya
Cerdanya
Cerdanya is a natural comarca and historical region of the eastern Pyrenees divided between France and Spain. Historically it has been one of the counties of Catalonia....
, the dominion of Montpellier
Montpellier
-Neighbourhoods:Since 2001, Montpellier has been divided into seven official neighbourhoods, themselves divided into sub-neighbourhoods. Each of them possesses a neighbourhood council....
, the barony of Aumelàs
Aumelas
Aumelas is a commune in the Hérault department in southern France.-Population:-References:*...
, and the viscounty of Carladès
Carlat
Carlat is a commune in the Cantal department in south-central France.The "Rocher de Carlat" or rock of Carlat situated above the picturesque commune was once the site of one of the most powerful and impenetrable chateaux in all of France. It was the seat of Jacques d'Armagnac, duke of Nemours, and...
. He also gained tribute from the fourth Balearic island, Minorca
Minorca
Min Orca or Menorca is one of the Balearic Islands located in the Mediterranean Sea belonging to Spain. It takes its name from being smaller than the nearby island of Majorca....
, which remained under Muslim control throughout his life. His status as a vassal to the Kingdom of Aragon, which was, at the time, the other component kingdom of the Crown of Aragon
Crown of Aragon
The Crown of Aragon Corona d'Aragón Corona d'Aragó Corona Aragonum controlling a large portion of the present-day eastern Spain and southeastern France, as well as some of the major islands and mainland possessions stretching across the Mediterranean as far as Greece...
and under the rule of his brother, Peter III
Peter III of Aragon
Peter the Great was the King of Aragon of Valencia , and Count of Barcelona from 1276 to his death. He conquered Sicily and became its king in 1282. He was one of the greatest of medieval Aragonese monarchs.-Youth and succession:Peter was the eldest son of James I of Aragon and his second wife...
, conflicted with his management of the Kingdom of Majorca, which spread over a greater amount of land than did Aragon.

In the Aragonese Crusade
Aragonese Crusade
The Aragonese Crusade or Crusade of Aragon, a part of the larger War of the Sicilian Vespers, was declared by Pope Martin IV against the King of Aragon, Peter III the Great, in 1284 and 1285...
, James allied with Pope Martin IV
Pope Martin IV
Pope Martin IV, born Simon de Brion held the papacy from February 21, 1281 until his death....
and king Philip III of France
Philip III of France
Philip III , called the Bold , was the King of France, succeeding his father, Louis IX, and reigning from 1270 to 1285. He was a member of the House of Capet.-Biography:...
(the widower of his sister, Isabella
Isabella of Aragon
Isabella of Aragon , infanta of Aragon, was, by marriage, Queen consort of France in the Middle Ages from 1270 to 1271.-Life:...
) against his brother, but was defeated in the Battle of Les Formigues
Battle of Les Formigues
The naval Battle of Les Formigues took place probably in the early morning of 4 September 1285 near Les Formigues Islands, about 85 km northeast of Barcelona, when a Catalan-Sicilian galley fleet commanded by Roger of Lauria defeated a French and Genoese galley fleet commanded by Guilhem de...
in 1285. His nephew Alfonso III of Aragon
Alfonso III of Aragon
Alfonso III , called the Liberal or the Free , was the King of Aragon and Count of Barcelona from 1285...
annexed the Balearic Islands to Aragon in the conquest, but they were returned by the Treaty of Anagni
Treaty of Anagni
The Treaty of Anagni was an accord between the Pope Boniface VIII, James II of Aragon, Philip IV of France, Charles II of Naples, and James II of Majorca. It was signed on 20 June 1295 at Anagni, in what is now central Italy. The chief purpose was to confirm the Treaty of Tarascon of 1291, which...
in 1295.

Following this reversion, James made an effort to improve the viability of the kingdom on the domestic front. He devoted himself to running his kingdom by reforming urbanism, establishing agricultural policy, emphasising defense, and reforming the economy. He implemented a vast policy of agricultural colonisation with the creation of rural centres; increase royal rents; favoured the creation of consulates in North Africa and the Kingdom of Granada; created a new monetary system for the kingdom; fomented the creation of textile industries; proceeded to increase the power of the crown over that of the nobility and the Church; and ordered the construction of several palaces and castles, including the palace at Perpignan, the Palace of Almudaina, the Cathedral of Santa María at Palma de Mallorca
Palma de Mallorca
Palma is the major city and port on the island of Majorca and capital city of the autonomous community of the Balearic Islands in Spain. The names Ciutat de Mallorca and Ciutat were used before the War of the Spanish Succession and are still used by people in Majorca. However, the official name...
, known today as La Seu
La Seu
The Cathedral of Santa Maria of Palma, more commonly referred to as La Seu, is a Gothic Roman Catholic cathedral located in Palma, Majorca, Spain, built on the site of a pre-existing Arab mosque. It is 121 metres long, 55 metres wide and its nave is 44 metres tall...
, and, finally, Bellver Castle
Bellver Castle
Bellver Castle is a Gothic style castle on a hill 3 km northwest of Palma on the Island of Majorca, Balearic Islands, Spain. It was built in the 14th century for King James II of Majorca, and is one of the few circular castles in Europe...
. The opening of criminal proceedings against the Knights Templar
Knights Templar
The Poor Fellow-Soldiers of Christ and of the Temple of Solomon , commonly known as the Knights Templar, the Order of the Temple or simply as Templars, were among the most famous of the Western Christian military orders...
and their later suppression would allow the seizure of the tithes of the Templars on the islands.

James wed Esclaramunda of Foix in 1275 through a marriage arranged by his own initiative and not that of his father's. Esclaramunda was a daughter of Roger IV of Foix
Roger IV of Foix
Roger IV , son and successor of Roger-Bernard II the Great, was the seventh count of Foix from 1241 to his death. His reign began with the south again at war with the north in France and, though he was reluctant to join his father's old ally, Raymond VII of Toulouse, in revolt and he did not aid...
. They had six children including: