Petrok Maly, also known as Petrok Maly Fryazin (? - c.
Circa
Circa , usually abbreviated c. or ca. , means "approximately" in the English language, usually referring to a date...
1539), was an Italian
Italy
Italy , officially the Italian Republic languages]] under the European Charter for Regional or Minority Languages. In each of these, Italy's official name is as follows:;;;;;;;;), is a unitary parliamentary republic in South-Central Europe. To the north it borders France, Switzerland, Austria and...
architect, who arrived in Moscow
Moscow
Moscow is the capital, the most populous city, and the most populous federal subject of Russia. The city is a major political, economic, cultural, scientific, religious, financial, educational, and transportation centre of Russia and the continent...
together with the envoys of Pope Clement VII
Pope Clement VII
Clement VII , born Giulio di Giuliano de' Medici, was a cardinal from 1513 to 1523 and was Pope from 1523 to 1534.-Early life:...
in 1528.

It is known that Petrok Maly adopted Russian Orthodoxy
Russian Orthodox Church
The Russian Orthodox Church or, alternatively, the Moscow Patriarchate The ROC is often said to be the largest of the Eastern Orthodox churches in the world; including all the autocephalous churches under its umbrella, its adherents number over 150 million worldwide—about half of the 300 million...
, got married, and received an estate from the grand prince
Grand Prince
The title grand prince or great prince ranked in honour below emperor and tsar and above a sovereign prince .Grand duke is the usual and established, though not literal, translation of these terms in English and Romance languages, which do not normally use separate words for a "prince" who reigns...
. He was not commissioned with any important architectural assignments until 1533, except for the construction of the Ascension Church in Kolomenskoye
Kolomenskoye
Kolomenskoye is a former royal estate situated several kilometers to the south-east of the city-centre of Moscow, Russia, on the ancient road leading to the town of Kolomna...
(the true architect's identity is still contested), one of the earliest Russian churches showing tented roof
Tented roof
A tented roof is a type of roof widely used in 16th and 17th century Russian architecture for churches. It is like a polygonal spire but differs in purpose in that it is typically used to roof the main internal space of a church, rather than an auxiliary structure...
design. In 1533, Petrok Maly was commissioned to built the so called Kitai-gorod
Kitai-gorod
Kitay-gorod , earlier also known as Great Posad , is a business district within Moscow, Russia, encircled by mostly-reconstructed medieval walls. It is separated from the Moscow Kremlin by Red Square. It does not constitute a district , as there are no resident voters, thus, municipal elections...
wall, the construction of which would be finished in 1538. The 2.6-km wall originally featured 14 towers and six gates. It was as thick as it was high, the average being six meters in both dimensions. Petrok Maly was also ordered to build a number of secret chambers under the towers and the wall itself. 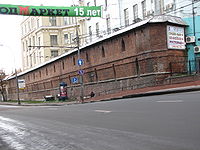 In 1539, Ivan the Terrible sent Petrok Maly to Sebezh
Sebezh
Sebezh is a town and the administrative center of Sebezhsky District of Pskov Oblast, Russia, located in a picturesque setting between lakes Sebezhskoye and Orono south of Pskov. Population:...
, where he would build a wall around the kremlin
Kremlin
A kremlin , same root as in kremen is a major fortified central complex found in historic Russian cities. This word is often used to refer to the best-known one, the Moscow Kremlin, or metonymically to the government that is based there...
in three weeks. On his way back to Moscow through Pskov
Pskov
Pskov is an ancient city and the administrative center of Pskov Oblast, Russia, located in the northwest of Russia about east from the Estonian border, on the Velikaya River. Population: -Early history:...
, Petrok Maly visited Pskovo-Pechorsky Monastery
Pskovo-Pechorsky Monastery
Pskov-Caves Monastery or The Pskovo-Pechersky Dormition Monastery or Pskovo-Pechersky Monastery is a Russian Orthodox male monastery, located in Pechory, Pskov Oblast in Russia, just a few kilometers from the Estonian border....
, from which he would suddenly flee to Livonia
Livonia
Livonia is a historic region along the eastern shores of the Baltic Sea. It was once the land of the Finnic Livonians inhabiting the principal ancient Livonian County Metsepole with its center at Turaida...
with his translator Grigori Mistrobanov. It is possible that Petrok Maly was afraid of being executed for knowing the exact location of the secret chambers under the Kitai-gorod wall, which he had probably interconnected with those in the Moscow Kremlin
Moscow Kremlin
The Moscow Kremlin , sometimes referred to as simply The Kremlin, is a historic fortified complex at the heart of Moscow, overlooking the Moskva River , Saint Basil's Cathedral and Red Square and the Alexander Garden...
itself. The "papal architect" was soon caught and taken to Dorpat
Bishopric of Dorpat
The Bishopric of Dorpat was a medieval principality and a catholic diocese which existed from 1224 to 1558, generally encompassing what are now Tartu, Põlva, Võru and Jõgeva counties in Estonia. The Bishopric was part of Livonian Confederation...
(Tartu
Tartu
Tartu is the second largest city of Estonia. In contrast to Estonia's political and financial capital Tallinn, Tartu is often considered the intellectual and cultural hub, especially since it is home to Estonia's oldest and most renowned university. Situated 186 km southeast of Tallinn, the...
), the bishop
Bishop
A bishop is an ordained or consecrated member of the Christian clergy who is generally entrusted with a position of authority and oversight. Within the Catholic Church, Eastern Orthodox, Oriental Orthodox Churches, in the Assyrian Church of the East, in the Independent Catholic Churches, and in the...
of which wanted to extradite him to the grand duke of Muscovy. Petrok Maly's later fate is unknown, but his name was never mentioned in any of the Russian chronicles after 1539.
The source of this article is wikipedia, the free encyclopedia.  The text of this article is licensed under the GFDL.