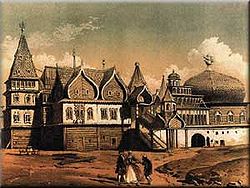 Kolomenskoye is a former royal estate situated several kilometers to the south-east of the city-centre of Moscow
Moscow
Moscow is the capital, the most populous city, and the most populous federal subject of Russia. The city is a major political, economic, cultural, scientific, religious, financial, educational, and transportation centre of Russia and the continent...
, Russia
Russia
Russia or , officially known as both Russia and the Russian Federation , is a country in northern Eurasia. It is a federal semi-presidential republic, comprising 83 federal subjects...
, on the ancient road leading to the town of Kolomna
Kolomna
Kolomna is an ancient city and the administrative center of Kolomensky District of Moscow Oblast, Russia, situated at the confluence of the Moskva and Oka Rivers, southeast of Moscow. The area of the city is about . The city was founded in 1177...
(hence the name). The 390 hectare
Hectare
The hectare is a metric unit of area defined as 10,000 square metres , and primarily used in the measurement of land. In 1795, when the metric system was introduced, the are was defined as being 100 square metres and the hectare was thus 100 ares or 1/100 km2...
scenic area which overlooks the steep banks of the Moskva River
Moskva River
The Moskva River is a river that flows through the Moscow and Smolensk Oblasts in Russia, and is a tributary of the Oka River.-Etymology:...
became a part of Moscow in the 1960s.


The White Column of Kolomenskoye

Kolomenskoye village was first mentioned in the testament
Will (law)
A will or testament is a legal declaration by which a person, the testator, names one or more persons to manage his/her estate and provides for the transfer of his/her property at death...
of Ivan Kalita (1339). As time went by, the village was developed as a favourite country estate of grand princes of Muscovy. The earliest extant structure is the exceptional Ascension church (1532), built in white stone to commemorate the long-awaited birth of an heir to the throne, the future Ivan the Terrible
Ivan IV of Russia
Ivan IV Vasilyevich , known in English as Ivan the Terrible , was Grand Prince of Moscow from 1533 until his death. His long reign saw the conquest of the Khanates of Kazan, Astrakhan, and Siberia, transforming Russia into a multiethnic and multiconfessional state spanning almost one billion acres,...
. Being the first stone church of tent-like variety, the uncanonical "White Column" (as it is sometimes referred to) marked a stunning rupture with the Byzantine tradition
Byzantine architecture
Byzantine architecture is the architecture of the Byzantine Empire. The empire gradually emerged as a distinct artistic and cultural entity from what is today referred to as the Roman Empire after AD 330, when the Roman Emperor Constantine moved the capital of the Roman Empire east from Rome to...
. http://img-2002-12.photosight.ru/10/127579.jpg

The church stands up toward the sky from a low cross-shaped podklet (ground floor), then follows a prolonged chetverik (octagonal body) of the church, and then an octagonal tent, crowned by a tiny dome. The narrow pilaster
Pilaster
A pilaster is a slightly-projecting column built into or applied to the face of a wall. Most commonly flattened or rectangular in form, pilasters can also take a half-round form or the shape of any type of column, including tortile....
s on the sides of the chetverik, the arrow-shaped window frames, the three tiers of the kokoshnik
Kokoshnik (architecture)
Kokoshnik is a semicircular or keel-like exterior decorative element in the traditional Russian architecture, a type of corbel zakomara . Unlike zakomara that continues the curvature of the vault behind and carries a part of the vault's weight, kokoshnik is pure decoration and doesn't carry any...
s and the quiet rhythm of stair arcades and open galleries underline the dynamic tendency of this masterpiece of the Russian architecture
Russian architecture
Russian architecture follows a tradition whose roots were established in the Eastern Slavic state of Kievan Rus'. After the fall of Kiev, Russian architectural history continued in the principalities of Vladimir-Suzdal, Novgorod, the succeeding states of the Tsardom of Russia, the Russian Empire,...
. The whole vertical composition is believed to have been borrowed from hipped roof
Tented roof
A tented roof is a type of roof widely used in 16th and 17th century Russian architecture for churches. It is like a polygonal spire but differs in purpose in that it is typically used to roof the main internal space of a church, rather than an auxiliary structure...
-style wooden churches of the Russian North. Recognizing its outstanding value for humanity, UNESCO
UNESCO
The United Nations Educational, Scientific and Cultural Organization is a specialized agency of the United Nations...
decided to inscribe the church on the World Heritage List in 1994.


The great palace and other structures

Tsar Alexis I
Alexis I of Russia
Aleksey Mikhailovich Romanov was the Tsar of Russia during some of the most eventful decades of the mid-17th century...
had all the previous wooden structures in Kolomenskoye demolished and replaced them with a new great wooden palace, famed for its fanciful, fairy-tale roofs. The foreigners referred to this huge maze of intricate corridors and 250 rooms, built without using saws, nails, or hooks, as 'an Eighth Wonder of the World'. Although ostensibly only a summer palace, it was the favorite residence of Tsar Alexis I. The future Empress Elizabeth Petrovna was born in the palace in 1709, and Tsar Peter the Great spend part of his youth here. Upon departure of the court for St Petersburg, the palace got dilapidated, so that Catherine II refused to make it her Moscow residence. On her orders the wooden palace was demolished in 1768, and replaced with a much more modest stone-and-brick structure. Fortunately a wooden model of the palace survives, and the Moscow Government has completed a full-scale reconstruction in 2010. The rebuilt palace stands approximately 1 km to the south of its original location, in order to preserve the historic foundations. The palace erected by Catherine the Great in 1768 was demolished in 1872, and only a few gates and outbuildings remain. 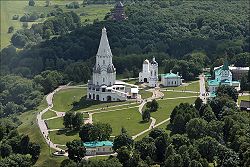 During the early Soviet period, under the initiative of architect-restorer Pyotr Baranovsky, old wooden buildings and various artifacts were transported to Kolomenskoye from different parts of the USSR for preservation, so currently Kolomenskoe Park hosts an impressive set of different constructions and historical objects.


Constructions and artifacts brought from elsewhere