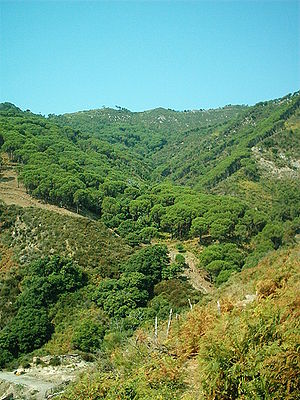 The Peloritani are a mountain range of north-eastern Sicily
Sicily
Sicily is a region of Italy, and is the largest island in the Mediterranean Sea. Along with the surrounding minor islands, it constitutes an autonomous region of Italy, the Regione Autonoma Siciliana Sicily has a rich and unique culture, especially with regard to the arts, music, literature,...
, in southern Italy
Italy
Italy , officially the Italian Republic languages]] under the European Charter for Regional or Minority Languages. In each of these, Italy's official name is as follows:;;;;;;;;), is a unitary parliamentary republic in South-Central Europe. To the north it borders France, Switzerland, Austria and...
, extending for some 65 km from Capo Peloro to the Nebrodi
Nebrodi
The Nebrodi a mountain range that runs along the north east of Sicily. Together with the Madonie and the Peloritani, they form the Sicilian Apennines....
Mountains. At North and West they are bordered by the Tyrrhenian
Tyrrhenian Sea
The Tyrrhenian Sea is part of the Mediterranean Sea off the western coast of Italy.-Geography:The sea is bounded by Corsica and Sardinia , Tuscany, Lazio, Campania, Basilicata and Calabria and Sicily ....
and Ionian Sea
Ionian Sea
The Ionian Sea , is an arm of the Mediterranean Sea, south of the Adriatic Sea. It is bounded by southern Italy including Calabria, Sicily and the Salento peninsula to the west, southern Albania to the north, and a large number of Greek islands, including Corfu, Zante, Kephalonia, Ithaka, and...
s, respectively.

The highest peaks are the Montagna Grande (1,374 m) and the Rocca Novara (1,340 m). The range is made up by a long series of peaks, with an average height of 800-1,000 m, intermingled with ridges and ravines. The deep gorges houses numerous streams, often full of deprises in their inferior flow. The most common rocks are of igneous
Igneous rock
Igneous rock is one of the three main rock types, the others being sedimentary and metamorphic rock. Igneous rock is formed through the cooling and solidification of magma or lava...
and metamorphic
Metamorphic rock
Metamorphic rock is the transformation of an existing rock type, the protolith, in a process called metamorphism, which means "change in form". The protolith is subjected to heat and pressure causing profound physical and/or chemical change...
origin. Sandstone
Sandstone
Sandstone is a sedimentary rock composed mainly of sand-sized minerals or rock grains.Most sandstone is composed of quartz and/or feldspar because these are the most common minerals in the Earth's crust. Like sand, sandstone may be any colour, but the most common colours are tan, brown, yellow,...
soils are also present. Of unusual origin are the rocks of the Argimusco
Argimusco
The Argimusco is a high plateau situated just North of Mount Etna in Sicily, between the Nebrodi and Peloritani Mountains. It lies within the boundaries of the communes of Montalbano Elicona, Tripi and Roccella Valdemone.Numerous megaliths, which local tradition attributes to a prehistoric...
plateau.

Vegetation include holm oak
Holm Oak
Quercus ilex, the Holm Oak or Holly Oak is a large evergreen oak native to the Mediterranean region. It takes its name from holm, an ancient name for holly...
, oak
Oak
An oak is a tree or shrub in the genus Quercus , of which about 600 species exist. "Oak" may also appear in the names of species in related genera, notably Lithocarpus...
, cork oak
Cork Oak
Quercus suber, commonly called the Cork Oak, is a medium-sized, evergreen oak tree in the section Quercus sect. Cerris. It is the primary source of cork for wine bottle stoppers and other uses, such as cork flooring. It is native to southwest Europe and northwest Africa.It grows to up to 20 m,...
, beech
Beech
Beech is a genus of ten species of deciduous trees in the family Fagaceae, native to temperate Europe, Asia and North America.-Habit:...
, pine
Pine
Pines are trees in the genus Pinus ,in the family Pinaceae. They make up the monotypic subfamily Pinoideae. There are about 115 species of pine, although different authorities accept between 105 and 125 species.-Etymology:...
and chestnut
Chestnut
Chestnut , some species called chinkapin or chinquapin, is a genus of eight or nine species of deciduous trees and shrubs in the beech family Fagaceae, native to temperate regions of the Northern Hemisphere. The name also refers to the edible nuts they produce.-Species:The chestnut belongs to the...
, which once formed large forests but are now, mostly due to the human presence, reduced to sparse woods, so that the landscape is largely steppe
Steppe
In physical geography, steppe is an ecoregion, in the montane grasslands and shrublands and temperate grasslands, savannas, and shrublands biomes, characterized by grassland plains without trees apart from those near rivers and lakes...
-like. Several pine woods have been reconstituted by the local authorities starting from the 1950s.
The source of this article is wikipedia, the free encyclopedia.  The text of this article is licensed under the GFDL.