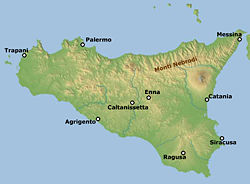 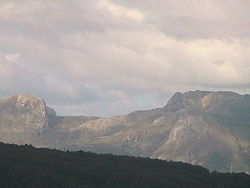 The Nebrodi a mountain range that runs along the north east of Sicily
Sicily
Sicily is a region of Italy, and is the largest island in the Mediterranean Sea. Along with the surrounding minor islands, it constitutes an autonomous region of Italy, the Regione Autonoma Siciliana Sicily has a rich and unique culture, especially with regard to the arts, music, literature,...
. Together with the Madonie
Madonie
The Madonie are one of the principal mountain groups in Sicily, southern Italy, part of the Sicilian portion of the Apennines. It is located in Palermo Province...
and the Peloritani
Peloritani
The Peloritani are a mountain range of north-eastern Sicily, in southern Italy, extending for some 65 km from Capo Peloro to the Nebrodi Mountains. At North and West they are bordered by the Tyrrhenian and Ionian Seas, respectively.The highest peaks are the Montagna Grande and the Rocca Novara...
, they form the Sicilian Apennines.

The mountains run from the Peloritani on the eastern part of the island
Island
An island or isle is any piece of sub-continental land that is surrounded by water. Very small islands such as emergent land features on atolls can be called islets, cays or keys. An island in a river or lake may be called an eyot , or holm...
to the foothill of the Madonie mountains to the west, facing the Tyrrhenian Sea
Tyrrhenian Sea
The Tyrrhenian Sea is part of the Mediterranean Sea off the western coast of Italy.-Geography:The sea is bounded by Corsica and Sardinia , Tuscany, Lazio, Campania, Basilicata and Calabria and Sicily ....
on the north. Mount Etna
Mount Etna
Mount Etna is an active stratovolcano on the east coast of Sicily, close to Messina and Catania. It is the tallest active volcano in Europe, currently standing high, though this varies with summit eruptions; the mountain is 21 m higher than it was in 1981.. It is the highest mountain in...
, from which it is separated by the rivers Alcantara
Alcantara (river)
The Alcantara is a river in Sicily. It has its source on the south side of Monti Nebrodi and its mouth in the Ionian Sea at Capo Schiso in Giardini-Naxos. The river is long....
and Simeto
Simeto
The Simeto is a 113 km long river in Sicily, southern Italy. It is the second longest river on the island after the Salso , but the most important in terms of watershed and for the population of the areas near it...
, forms the range's southern border. The highest peak is the Monte Soro (1,817 m). The range mostly made up of sandstone
Sandstone
Sandstone is a sedimentary rock composed mainly of sand-sized minerals or rock grains.Most sandstone is composed of quartz and/or feldspar because these are the most common minerals in the Earth's crust. Like sand, sandstone may be any colour, but the most common colours are tan, brown, yellow,...
and clay
Clay
Clay is a general term including many combinations of one or more clay minerals with traces of metal oxides and organic matter. Geologic clay deposits are mostly composed of phyllosilicate minerals containing variable amounts of water trapped in the mineral structure.- Formation :Clay minerals...
rocks, but include also limestone
Limestone
Limestone is a sedimentary rock composed largely of the minerals calcite and aragonite, which are different crystal forms of calcium carbonate . Many limestones are composed from skeletal fragments of marine organisms such as coral or foraminifera....
landscapes, like the Rocche del Crasto. Towns that are situated in the mountains include Troina
Troina
Troina is a town and comune in the province of Enna, Sicily, Italy. It is located in the Nebrodi Park.-History:...
, Nicosia
Nicosia
Nicosia from , known locally as Lefkosia , is the capital and largest city in Cyprus, as well as its main business center. Nicosia is the only divided capital in the world, with the southern and the northern portions divided by a Green Line...
, Mistretta
Mistretta
Mistretta is a comune in the Province of Messina in the Italian region Sicily, located about 90 km east of Palermo and about 110 km west of Messina...
and a number of other towns in the province of Messina
Province of Messina
Messina is a province in the autonomous island region of Sicily in Italy. Its capital is the city of Messina.-Geography and demography :...
.

In 1993 large areas of the Nebrodi Mountains were made into national parkland. The park covers 856.87 km². It touches on many of the comuni in the mountains and is one of the largest protected parks in Sicily.