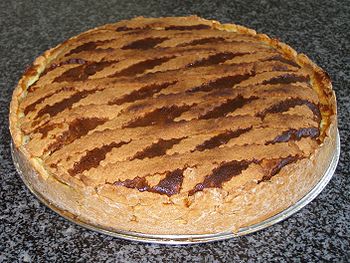 Pastiera is a type of Italian
Italy
Italy , officially the Italian Republic languages]] under the European Charter for Regional or Minority Languages. In each of these, Italy's official name is as follows:;;;;;;;;), is a unitary parliamentary republic in South-Central Europe. To the north it borders France, Switzerland, Austria and...
cake
Cake
Cake is a form of bread or bread-like food. In its modern forms, it is typically a sweet and enriched baked dessert. In its oldest forms, cakes were normally fried breads or cheesecakes, and normally had a disk shape...
made with ricotta
Ricotta
Ricotta is an Italian dairy product made from sheep milk whey left over from the production of cheese. Although typically referred to as ricotta cheese, ricotta is not properly a cheese because it is not produced by coagulation of casein...
cheese. It originates from the area of Naples
Naples
Naples is a city in Southern Italy, situated on the country's west coast by the Gulf of Naples. Lying between two notable volcanic regions, Mount Vesuvius and the Phlegraean Fields, it is the capital of the region of Campania and of the province of Naples...
. It is a typical cake during Easter time.

It was used during the pagan
Paganism
Paganism is a blanket term, typically used to refer to non-Abrahamic, indigenous polytheistic religious traditions....
celebrations of the return of the Spring
Spring (season)
Spring is one of the four temperate seasons, the transition period between winter and summer. Spring and "springtime" refer to the season, and broadly to ideas of rebirth, renewal and regrowth. The specific definition of the exact timing of "spring" varies according to local climate, cultures and...
time. During these celebrations Ceres’ priestess
Priest
A priest is a person authorized to perform the sacred rites of a religion, especially as a mediatory agent between humans and deities. They also have the authority or power to administer religious rites; in particular, rites of sacrifice to, and propitiation of, a deity or deities...
brought an egg, symbol of new life in procession. Because of the wheat
Wheat
Wheat is a cereal grain, originally from the Levant region of the Near East, but now cultivated worldwide. In 2007 world production of wheat was 607 million tons, making it the third most-produced cereal after maize and rice...
or the einkorn, mixed with the soft ricotta cheese, it could come from the einkorn bread called "confarreatio", an essential ingredient in the ceremony of the type of ancient Roman
Ancient Rome
Ancient Rome was a thriving civilization that grew on the Italian Peninsula as early as the 8th century BC. Located along the Mediterranean Sea and centered on the city of Rome, it expanded to one of the largest empires in the ancient world....
weddings named after it "confarreatio". Another hypothesis we may consider is that it comes from ritual bread used, which spread during the period of Constantine the Great. They were made of honey
Honey
Honey is a sweet food made by bees using nectar from flowers. The variety produced by honey bees is the one most commonly referred to and is the type of honey collected by beekeepers and consumed by humans...
and milk
Milk
Milk is a white liquid produced by the mammary glands of mammals. It is the primary source of nutrition for young mammals before they are able to digest other types of food. Early-lactation milk contains colostrum, which carries the mother's antibodies to the baby and can reduce the risk of many...
the people offered the catechumen
Catechumen
In ecclesiology, a catechumen , “‘down’” + ἠχή , “‘sound’”) is one receiving instruction from a catechist in the principles of the Christian religion with a view to baptism...
during Easter
Easter
Easter is the central feast in the Christian liturgical year. According to the Canonical gospels, Jesus rose from the dead on the third day after his crucifixion. His resurrection is celebrated on Easter Day or Easter Sunday...
Eve at the end of the ceremony of baptism
Baptism
In Christianity, baptism is for the majority the rite of admission , almost invariably with the use of water, into the Christian Church generally and also membership of a particular church tradition...
.

The modern pastiera was probably invented in a Neapolitan convent. An unknown nun wanted that cake, symbol of the Resurrection
Resurrection
Resurrection refers to the literal coming back to life of the biologically dead. It is used both with respect to particular individuals or the belief in a General Resurrection of the dead at the end of the world. The General Resurrection is featured prominently in Jewish, Christian, and Muslim...
, to have the perfume of the flowers of the orange trees which grew in the convent’s gardens. She mixed a handful of wheat to the white ricotta cheese, then she added some eggs, symbol of the new life, some water which had the fragrance of the flowers of the spring time, candied citron
Citron
Not to be confused with Cintron.The citron is a fragrant citrus fruit, botanically classified as Citrus medica by both the Swingle and Tanaka systems...
and aromatic Asian spices.

There are two different ways of preparing pastiera: in the older, the ricotta is mixed with the eggs; in the newer, thick pastry cream is added, making the pastiera softer. This innovation was introduced by Starace, a Neapolitan confectioner with a shop in a corner in Municipio Square.

The Pastiera has to be cooked some days in advance, no later than Maundy Thursday
Maundy Thursday
Maundy Thursday, also known as Holy Thursday, Covenant Thursday, Great & Holy Thursday, and Thursday of Mysteries, is the Christian feast or holy day falling on the Thursday before Easter that commemorates the Last Supper of Jesus Christ with the Apostles as described in the Canonical gospels...
or Good Friday
Good Friday
Good Friday , is a religious holiday observed primarily by Christians commemorating the crucifixion of Jesus Christ and his death at Calvary. The holiday is observed during Holy Week as part of the Paschal Triduum on the Friday preceding Easter Sunday, and may coincide with the Jewish observance of...
, in order to allow the fragrances to mix properly and result in that unique flavor. The Pastiera is not only cooked but also sold and served in appropriate pans called "ruoti" because it is very fragile, so it would easily crumble up if removed from the "ruoto".