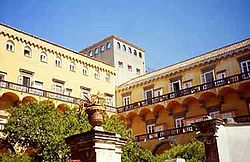 San Gregorio Armeno is a church and a monastery in Naples
Naples
Naples is a city in Southern Italy, situated on the country's west coast by the Gulf of Naples. Lying between two notable volcanic regions, Mount Vesuvius and the Phlegraean Fields, it is the capital of the region of Campania and of the province of Naples...
, Italy
Italy
Italy , officially the Italian Republic languages]] under the European Charter for Regional or Minority Languages. In each of these, Italy's official name is as follows:;;;;;;;;), is a unitary parliamentary republic in South-Central Europe. To the north it borders France, Switzerland, Austria and...
. It is one of the most important Baroque
Baroque
The Baroque is a period and the style that used exaggerated motion and clear, easily interpreted detail to produce drama, tension, exuberance, and grandeur in sculpture, painting, literature, dance, and music...
complexes in Naples.

In the 8th century, the iconoclast
Iconoclasm
Iconoclasm is the deliberate destruction of religious icons and other symbols or monuments, usually with religious or political motives. It is a frequent component of major political or religious changes...
decrees in Greece caused a number of religious orders to flee the Byzantine empire and seek refuge elsewhere. San Gregorio Armeno in Naples was built in the 10th century over the remains of a Roman temple dedicated to Ceres, by a group of nuns escaping from the Byzantine Empire with the relics of St. Gregory, bishop of Armenia
Gregory the Illuminator
Saint Gregory the Illuminator or Saint Gregory the Enlightener is the patron saint and first official head of the Armenian Apostolic Church...
. During the Norman domination the monastery was united to that of the Salvatore and San Pantaleone, assuming the Benedictine
Benedictine
Benedictine refers to the spirituality and consecrated life in accordance with the Rule of St Benedict, written by Benedict of Nursia in the sixth century for the cenobitic communities he founded in central Italy. The most notable of these is Monte Cassino, the first monastery founded by Benedict...
rule.

The construction of the church was begun in 1574 and consecrated five years later. The façade has three arcades surmounted by four pilaster strips in Tuscan order
Tuscan order
Among canon of classical orders of classical architecture, the Tuscan order's place is due to the influence of the Italian Sebastiano Serlio, who meticulously described the five orders including a "Tuscan order", "the solidest and least ornate", in his fourth book of Regole generalii di...
. The interior has a single nave with five side arcades: the decoration, with the exception of the five chapels, was finished by Luca Giordano
Luca Giordano
Luca Giordano was an Italian late Baroque painter and printmaker in etching. Fluent and decorative, he worked successfully in Naples and Rome, Florence and Venice, before spending a decade in Spain....
(also author of the Saints over the windows of the dome) in 1679. Bernardino Lama, likely the son of Giovanni Bernardo Lama
Giovanni Bernardo Lama
Giovanni Bernardo Lama was an Italian painter of the Renaissance period, active mainly in Naples. He was the son of a generally unknown artist, Matteo Lama. He was the apprentice of Giovanni Antonio D’Amato, then Polidoro da Caravaggio who had fled Rome after the Sack of 1527. He worked in the...
, was author of the altarpiece. The interior houses also the famous Holy Staircase, used by the nuns during their penitences.

The Idria Chapel houses eighteen paintings by Paolo De Matteis
Paolo de Matteis
Paolo de Matteis was an Italian painter.He was born in Cilento near Salerno, and died in Naples. He trained with Francesco di Maria in Naples, then with Luca Giordano. He came to the employ of the Spanish Viceroy of Naples. From 1702 to 1705, de' Matteis worked in Paris, Calabria, and Genoa...
, portraying the Life of Mary. Over the chapel's high altar is a medieval icon, in Byzantine style, of the Madonna dell'Idria. Other artworks include paintings by Pacecco De Rosa
Pacecco De Rosa
Pacecco De Rosa was an Italian painter, active in Naples.-Biography:He was a contemporary of Massimo Stanzione or, according to others, a pupil of him...
, Nicola Malinconico
Nicola Malinconico
Nicola Malinconico was a Neapolitan painter of the late-Baroque. He is described as a follower of Luca Giordano, and painted mostly religious canvases. He painted the chapel altarpieces for the church of St Michele Arcangelo in Anacapri...
and a St. Benedict by Spagnoletto.

The main attractive is the cloister
Cloister
A cloister is a rectangular open space surrounded by covered walks or open galleries, with open arcades on the inner side, running along the walls of buildings and forming a quadrangle or garth...
(1580). In the centre is a marble fountain, decorated with dolphins and other marine creatures, with the statues of "Christ and the Samaritana", by Matteo Bottiglieri
Matteo Bottiglieri
Matteo Bottiglieri was an Italian sculptor and painter from Naples.One of his first works is a marble "Dead Christ" , in the crypt of the Capua Cathedral, perhaps executed after drawings by Francesco Solimena...
.
The source of this article is wikipedia, the free encyclopedia.  The text of this article is licensed under the GFDL.