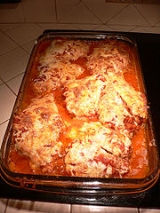 Parmigiana is a Southern Italian dish made with a shallow-fried sliced filling, layered with cheese
Cheese
Cheese is a generic term for a diverse group of milk-based food products. Cheese is produced throughout the world in wide-ranging flavors, textures, and forms....
and tomato sauce
Tomato sauce
A tomato sauce is any of a very large number of sauces made primarily from tomatoes, usually to be served as part of a dish...
, then baked. Parmigiana made with a filling of aubergine
Aubergine
The eggplant, aubergine, melongene, brinjal or guinea squash is a plant of the family Solanaceae and genus Solanum. It bears a fruit of the same name, commonly used in cooking...
(eggplant) is the earliest version. Variations made with breaded meat cutlet
Cutlet
Cutlet refers to:# a thin slice of meat from the leg or ribs of veal, pork, or mutton # a fried cutlet# a croquette made of minced meat...
s, such as veal
Veal
Veal is the meat of young cattle , as opposed to meat from older cattle. Though veal can be produced from a calf of either sex and any breed, most veal comes from male calves of dairy cattle breeds...
and chicken
Chicken
The chicken is a domesticated fowl, a subspecies of the Red Junglefowl. As one of the most common and widespread domestic animals, and with a population of more than 24 billion in 2003, there are more chickens in the world than any other species of bird...
parmigiana, have been popularized in other countries, usually in areas of Italian immigration
Italian diaspora
The term Italian diaspora refers to the large-scale migration of Italians away from Italy in the period roughly beginning with the unification of Italy in 1861 and ending with the Italian economic miracle in the 1960s...
.

The dish is claimed by both Campania
Campania
Campania is a region in southern Italy. The region has a population of around 5.8 million people, making it the second-most-populous region of Italy; its total area of 13,590 km² makes it the most densely populated region in the country...
and Sicily
Sicily
Sicily is a region of Italy, and is the largest island in the Mediterranean Sea. Along with the surrounding minor islands, it constitutes an autonomous region of Italy, the Regione Autonoma Siciliana Sicily has a rich and unique culture, especially with regard to the arts, music, literature,...
. While "parmigiana" usually means "from Parma
Parma
Parma is a city in the Italian region of Emilia-Romagna famous for its ham, its cheese, its architecture and the fine countryside around it. This is the home of the University of Parma, one of the oldest universities in the world....
" (in Northern Italy
Northern Italy
Northern Italy is a wide cultural, historical and geographical definition, without any administrative usage, used to indicate the northern part of the Italian state, also referred as Settentrione or Alta Italia...
), the dish is not part of the cuisine of Parma. It is a Southern Italian dish.

In addition to the original Italian recipe, many variations are found world-wide, most often in countries where large numbers of Italians immigrated. Unlike the Italian parmigiana, these often include meat: veal
Veal
Veal is the meat of young cattle , as opposed to meat from older cattle. Though veal can be produced from a calf of either sex and any breed, most veal comes from male calves of dairy cattle breeds...
parmigiana and chicken parmigiana, made of breaded and fried slices of meat topped with a marinara sauce
Marinara Sauce
Marinara sauce is a southern Italian tomato sauce usually made with tomatoes, garlic, herbs , and onion. However, there are many variations. Some of these include the addition of capers, olives, anchovies, and/or spices....
and mozzarella. They are then usually baked until the cheese is bubbly and brown.

Parmigiana is also used in the names of unrelated dishes which do form part of the cuisine of Parma cuisine, such as trippa alla parmigiana (Parma-style tripe).

The dish consists of a sliced filling pan fried
Pan frying
Pan frying is a form of frying characterized by the use of minimal cooking oil or fat ; typically using just enough oil to lubricate the pan...
in oil, layered with tomato sauce and cheese, and baked in an oven. In some versions, the sliced filling is first dipped in beaten eggs and dredged in flour or breadcrumbs before frying. Some recipes use hard grated cheeses such as Parmesan, while others use softer melting cheeses like Mozzarella
Mozzarella
Mozzarella is an Italian Traditional Speciality Guaranteed food product. The term is used for several kinds of Italian cheeses that are made using spinning and then cutting :...
, or a combination of these. 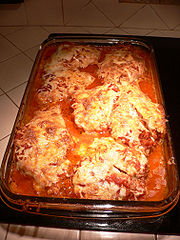 In the United States
United States
The United States of America is a federal constitutional republic comprising fifty states and a federal district...
and Canada
Canada
Canada is a North American country consisting of ten provinces and three territories. Located in the northern part of the continent, it extends from the Atlantic Ocean in the east to the Pacific Ocean in the west, and northward into the Arctic Ocean...
, veal parmigiana or chicken parmigiana is commonly served as a submarine sandwich
Submarine sandwich
A submarine sandwich, also known as a sub among other names, is a sandwich that consists of a long roll of Italian or French bread, split lengthwise either into two pieces or opened in a "V" on one side, and filled with various varieties of meat, cheese, vegetables, seasonings, and sauces. The...
. It is also popular with a side of or on top of pasta
Pasta
Pasta is a staple food of traditional Italian cuisine, now of worldwide renown. It takes the form of unleavened dough, made in Italy, mostly of durum wheat , water and sometimes eggs. Pasta comes in a variety of different shapes that serve for both decoration and to act as a carrier for the...
.

Chicken or veal parmigiana is a staple of Australian pub
Australian pubs
A public house in Australia is an establishment performing many functions, often serving alcoholic beverages, meals, and providing basic accommodation.-Origin:...
cuisine and casual dining, often served with a side of chips
French fries
French fries , chips, fries, or French-fried potatoes are strips of deep-fried potato. North Americans tend to refer to any pieces of deep-fried potatoes as fries or French fries, while in the United Kingdom, Australia, Ireland and New Zealand, long, thinly cut slices of deep-fried potatoes are...
and salad. It may contain a variety of toppings, including sliced ham or fried aubergine slices. This dish is often referred to as a parma or very rarely a parmi or occasionally on menus as the "Queen of Schnitzels".

A similar dish, the Parmo
Parmo
Parmo or Parmesan, a food dish originating in Middlesbrough, is popular in the North East of England, North Yorkshire and especially in the Teesside area, Hartlepool and Darlington. It typically consists of deep-fried chicken in bread crumbs topped with a white béchamel sauce and cheese...
, which uses either pork or chicken, has developed in England
England
England is a country that is part of the United Kingdom. It shares land borders with Scotland to the north and Wales to the west; the Irish Sea is to the north west, the Celtic Sea to the south west, with the North Sea to the east and the English Channel to the south separating it from continental...
.

The Brazilian
Brazil
Brazil , officially the Federative Republic of Brazil , is the largest country in South America. It is the world's fifth largest country, both by geographical area and by population with over 192 million people...
variation is usually beef, and may often contain vegetables (such as peas) in the topping.

There are several conflicting theories for the origin of the name parmigiana.

One common theory attributes the name to the use of Parmigiano-Reggiano (Parmesan cheese). For this reason the dish is sometimes called "melanzane alla parmigiana", though "parmigiana di melanzane" is considered more correct.

Another theory attributes the name to an alteration of the Sicilian word parmiciana:


With its liberal use of aubergines and tomatoes, this is most likely an ancient Sicilian dish which, in many cookbooks is erroneously described as deriving its name from Parmigiano-Reggiano cheese, one of the ingredients. However "parmigiana" is the Italianization of the Sicilian dialectal word "parmiciana", which refers to the slats of wood which compose the central part of a shutter and overlap in the same manner as the slices of aubergine in the dish."

A variant of this theory traces the name to Sicilian "palmigiana", also meaning "shutter", from the way in which the slices are laid.

As with Parmigiano-Reggiano cheese, the word Parmigiana is often rendered as "Parmesan" in English
English language
English is a West Germanic language that arose in the Anglo-Saxon kingdoms of England and spread into what was to become south-east Scotland under the influence of the Anglian medieval kingdom of Northumbria...
-speaking countries, from the French word for "from Parma."