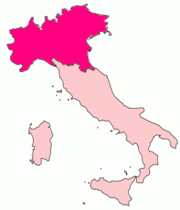 Northern Italy is a wide cultural, historical and geographical definition, without any administrative usage, used to indicate the northern part of the Italian state
Italy
Italy , officially the Italian Republic languages]] under the European Charter for Regional or Minority Languages. In each of these, Italy's official name is as follows:;;;;;;;;), is a unitary parliamentary republic in South-Central Europe. To the north it borders France, Switzerland, Austria and...
, also referred as Settentrione or Alta Italia. It coincides with two areas belonging to Italian first level NUTS of the European Union
First level NUTS of the European Union
The Nomenclature of Territorial Units for Statistics, , is a geocode standard for referencing the administrative divisions of countries for statistical purposes. The standard was developed by the European Union.There are three levels of NUTS defined, with two levels of local administrative units ...
:

By far the larger portion of Northern Italy is occupied by the basin of the Po river
Po River
The Po |Ligurian]]: Bodincus or Bodencus) is a river that flows either or – considering the length of the Maira, a right bank tributary – eastward across northern Italy, from a spring seeping from a stony hillside at Pian del Re, a flat place at the head of the Val Po under the northwest face...
, which comprises the whole of the broad plain extending from the foot of the Apennines to that of the Alps
Alps
The Alps is one of the great mountain range systems of Europe, stretching from Austria and Slovenia in the east through Italy, Switzerland, Liechtenstein and Germany to France in the west....
, together with the valleys and slopes on both sides of it. Throughout its whole course indeed, from its source in Monte Viso
Monte Viso
Monte Viso or Monviso , is a mountain in the Cottian Alps in Italy close to the French border. Monte Viso is well known for its pyramid-like shape, and because it is higher than all its neighbouring peaks by about 500 m it can be seen from some distance, from the Piedmontese plateau and the...
to its outflow into the Adriatic Sea
Adriatic Sea
The Adriatic Sea is a body of water separating the Italian Peninsula from the Balkan peninsula, and the system of the Apennine Mountains from that of the Dinaric Alps and adjacent ranges...
—a distance of more than 5 degrees of longitude, or 220 miles in a direct line—the Po receives all the waters that flow from the Apennines northwards, and all those that descend from the Alps towards the south, till one comes to the Adige
Adige
The Adige is a river with its source in the Alpine province of South Tyrol near the Italian border with Austria and Switzerland. At in length, it is the second longest river in Italy, after the River Po with ....
, which, after pursuing a parallel course with the Po for a considerable distance, enters the Adriatic by a separate mouth.

Northern Italy is the most developed and productive area of the country, and the first part of Italy to be industrialized in the last half of the 19th century, the so called industrial triangle formed by the manufacturing centres of Milan
Milan
Milan is the second-largest city in Italy and the capital city of the region of Lombardy and of the province of Milan. The city proper has a population of about 1.3 million, while its urban area, roughly coinciding with its administrative province and the bordering Province of Monza and Brianza ,...
and Turin
Turin
Turin is a city and major business and cultural centre in northern Italy, capital of the Piedmont region, located mainly on the left bank of the Po River and surrounded by the Alpine arch. The population of the city proper is 909,193 while the population of the urban area is estimated by Eurostat...
and the seaport of Genoa
Genoa
Genoa |Ligurian]] Zena ; Latin and, archaically, English Genua) is a city and an important seaport in northern Italy, the capital of the Province of Genoa and of the region of Liguria....
. With a 2008 nominal GDP estimated in €860.6 billion, Northern Italy accounts for almost 55% of the national economy.

In 2005 the BBC and Meteorologists across Europe revealed that Northern Italy was one of Europe's most polluted areas due to smog, and air pollution. Today, the air quality in Northern Italy still continues to be a major factor that the area has to face.

Farming in North Italy has many advantages, including the following: