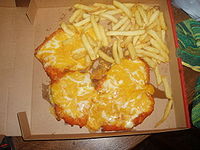 Parmo or Parmesan, a food dish originating in Middlesbrough
Middlesbrough
Middlesbrough is a large town situated on the south bank of the River Tees in north east England, that sits within the ceremonial county of North Yorkshire...
, is popular in the North East of England, North Yorkshire
North Yorkshire
North Yorkshire is a non-metropolitan or shire county located in the Yorkshire and the Humber region of England, and a ceremonial county primarily in that region but partly in North East England. Created in 1974 by the Local Government Act 1972 it covers an area of , making it the largest...
and especially in the Teesside
Teesside
Teesside is the name given to the conurbation in the north east of England made up of the towns of Middlesbrough, Stockton-on-Tees, Redcar, Billingham and surrounding settlements near the River Tees. It was also the name of a local government district between 1968 and 1974—the County Borough of...
area, Hartlepool
Hartlepool
Hartlepool is a town and port in North East England.It was founded in the 7th century AD, around the Northumbrian monastery of Hartlepool Abbey. The village grew during the Middle Ages and developed a harbour which served as the official port of the County Palatine of Durham. A railway link from...
and Darlington
Darlington
Darlington is a market town in the Borough of Darlington, part of the ceremonial county of County Durham, England. It lies on the small River Skerne, a tributary of the River Tees, not far from the main river. It is the main population centre in the borough, with a population of 97,838 as of 2001...
. It typically consists of deep-fried chicken in bread crumbs topped with a white béchamel sauce
Béchamel sauce
Béchamel sauce , also known as white sauce, is one of the mother sauces of French cuisine and is used in many recipes of Italian cuisine, for example lasagne. It is used as the base for other sauces . It is traditionally made by whisking scalded milk gradually into a white roux...
and cheese. Variations use pork or, less commonly, a vegetarian main component.

The Parmo originated as escalope Parmesan, a derivative of veal or chicken Parmigiana
Parmigiana
Parmigiana is a Southern Italian dish made with a shallow-fried sliced filling, layered with cheese and tomato sauce, then baked. Parmigiana made with a filling of aubergine is the earliest version...
, a dish found in several areas where Italian immigrants have settled. The parmo is said to have been created by Nicos Harris, a chef with the America
United States
The United States of America is a federal constitutional republic comprising fifty states and a federal district...
n army in World War II
World War II
World War II, or the Second World War , was a global conflict lasting from 1939 to 1945, involving most of the world's nations—including all of the great powers—eventually forming two opposing military alliances: the Allies and the Axis...
. He was wounded in France, but was brought to the United Kingdom
United Kingdom
The United Kingdom of Great Britain and Northern IrelandIn the United Kingdom and Dependencies, other languages have been officially recognised as legitimate autochthonous languages under the European Charter for Regional or Minority Languages...
to be treated in a British hospital. Eventually, he moved to Middlesbrough and opened a restaurant on Linthorpe Road, where he created the parmo at The American Grill in 1958. His son-in-law, Caramello, still lives in Teesside and continues the family tradition.

Chicken or pork fillets are flattened, then dipped in egg and then bread crumbs, after which it is deep-fried. Onto this is poured a thick, white sauce (similar to béchamel sauce, but butter may be partially or wholly replaced by other fats) and then it is topped with grated cheese. The cheese is usually a hard cheese such as cheddar, rather than Parmesan cheese, that originally gave the dish its name. The dish is then grilled or baked to melt the cheese.

Recent years have seen an increase in the number of outlets preparing the parmo with reformed chicken rather than solid fillet.

The parmo is generally available in two sizes, and terminology varies between outlets:

Originally, veal
Veal
Veal is the meat of young cattle , as opposed to meat from older cattle. Though veal can be produced from a calf of either sex and any breed, most veal comes from male calves of dairy cattle breeds...
was used, but was later replaced by pork
Pork
Pork is the culinary name for meat from the domestic pig , which is eaten in many countries. It is one of the most commonly consumed meats worldwide, with evidence of pig husbandry dating back to 5000 BC....
. In more recent times, chicken
Chicken
The chicken is a domesticated fowl, a subspecies of the Red Junglefowl. As one of the most common and widespread domestic animals, and with a population of more than 24 billion in 2003, there are more chickens in the world than any other species of bird...
became more popular as more Muslim
Muslim
A Muslim, also spelled Moslem, is an adherent of Islam, a monotheistic, Abrahamic religion based on the Quran, which Muslims consider the verbatim word of God as revealed to prophet Muhammad. "Muslim" is the Arabic term for "submitter" .Muslims believe that God is one and incomparable...
-owned takeaway restaurants opened. Fish and vegetarian parmos are also offered in certain restaurants.

Parmos are also offered with additional toppings in combinations that vary from restaurant to restaurant.
For example:

Due to its size, a full parmo is usually served in a pizza box along with its accompaniments, although a large round polystyrene
Polystyrene
Polystyrene ) also known as Thermocole, abbreviated following ISO Standard PS, is an aromatic polymer made from the monomer styrene, a liquid hydrocarbon that is manufactured from petroleum by the chemical industry...
tray is also common.

In 2009, supermarket chain Asda
Asda
Asda Stores Ltd is a British supermarket chain which retails food, clothing, general merchandise, toys and financial services. It also has a mobile telephone network, , Asda Mobile...
started selling parmos in their shops in Teesside. They claimed they were selling 6,000 chicken parmos a week, making them at the time the shop's fastest selling line. Asda later expanded this line to branches outside Teesside.

In 2007, North Yorkshire Trading Standards conducted a survey of 25 fast food dishes. A large parmo with chips and salad contains about 2600 calories and 150g of fat.