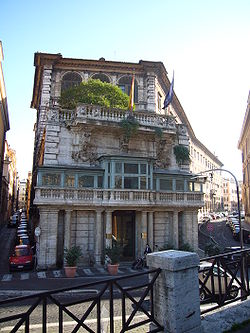 Palazzo Borghese is a palace in Rome
Rome
Rome is the capital of Italy and the country's largest and most populated city and comune, with over 2.7 million residents in . The city is located in the central-western portion of the Italian Peninsula, on the Tiber River within the Lazio region of Italy.Rome's history spans two and a half...
, Italy, the main seat of the Borghese
Borghese
Borghese is the surname of a family of Italian noble and papal background, originating as the Borghese or Borghesi in Siena, where they came to prominence in the 13th century holding offices under the commune. The head of the family, Marcantonio, moved to Rome in the 16th century and there,...
family in. It was nicknamed il Cembalo ("the harpsichord") due to its unusual trazezoidal groundplan; its shortest front faces the River Tiber
Tiber
The Tiber is the third-longest river in Italy, rising in the Apennine Mountains in Emilia-Romagna and flowing through Umbria and Lazio to the Tyrrhenian Sea. It drains a basin estimated at...
. The entrance at the opposite end of the building faces onto the Fontanella di Borghese, with another in a great flanking facade to the Piazza Borghese that is extended by a slightly angled facade leading down Via Borghese towards the river. Both these entrances lead into a large courtyard on one side of which is a two level open arcade, with paired Doric and Ionic columns, that frames the garden beyond.

The architectural historian Howard Hibbard has demonstrated that the nine-bay section of the palace on Piazza Fontanella Borghese was begun in 1560/61 for Monsignor Tommaso del Giglio, whose coat of arms or stemma remain over the door in Piazza Borghese, and he suggests that the architect was Vignola
Giacomo Barozzi da Vignola
Giacomo Barozzi da Vignola was one of the great Italian architects of 16th century Mannerism. His two great masterpieces are the Villa Farnese at Caprarola and the Jesuits' Church of the Gesù in Rome...
, an attribution accepted by Anthony Blunt
Anthony Blunt
Anthony Frederick Blunt , was a British art historian who was exposed as a Soviet spy late in his life.Blunt was Professor of the History of Art at the University of London, director of the Courtauld Institute of Art, Surveyor of the King's Pictures and London...
, considered conclusive by James S. Ackerman
James S. Ackerman
James Sloss Ackerman is a prominent American architectural historian, a major scholar of Michelangelo's architecture, of Palladio and of Italian Renaissance architectural theory.-Biography:...
and followed by other scholars since, with more or less reduced interventions by Longhi. Before Tomasso del Giglio died in 1578, the façade and the unique but undocumented double-columned two-storey arcade of the courtyard had been established, a conceptual scheme of Vignola's, Hibbard suggested, but which was carried out in 1575-78 by Martino Longhi the Elder
Martino Longhi the Elder
Martino Longhi the Elder was an Italian architect, the father of Onorio Longhi and the grandfather of Martino Longhi the Younger.He was born in Viggiù into a family of architects, and initially worked in Germany for the Altemps family, who were relatives of the Milanese Borromeo...
. Longhi was retained by Pedro Cardinal Deza, who bought the property in 1587, but seems to have done little more than continue the great courtyard.

Cardinal Camillo Borghese purchased the structure in 1604 and acquired further adjacent properties towards the river. When the Cardinal became Pope Paul V
Pope Paul V
-Theology:Paul met with Galileo Galilei in 1616 after Cardinal Bellarmine had, on his orders, warned Galileo not to hold or defend the heliocentric ideas of Copernicus. Whether there was also an order not to teach those ideas in any way has been a matter for controversy...
in 1605, he gave the palace to his brothers but continued to commission the work, which was carried forward vigorously, at first by Flaminio Ponzio
Flaminio Ponzio
Flaminio Ponzio was an Italian architect during the late-Renaissance or so-called Mannerist period, serving in Rome as the architect for Pope Paul V.Ponzio was born in Viggiù near Varese, and he died in Rome...
, and completed after Ponzio's death in 1613 by Carlo Maderno
Carlo Maderno
Carlo Maderno was a Swiss-Italian architect, born in Ticino, who is remembered as one of the fathers of Baroque architecture. His façades of Santa Susanna, St. Peter's Basilica and Sant'Andrea della Valle were of key importance in the evolution of the Italian Baroque...
and Giovanni Vasanzio
Giovanni Vasanzio
Giovanni Vasanzio or Jan van Santen was a Dutch-born architect, garden designer and engraver who spent his mature career in Rome, where he arrived in the 1580s...
. Ponzio extended the square courtyard from five to seven bays, and the oval stair between the courtyard and a garden that stretched as far as the Ripetta. He also constructed the secondary facade onto the Piazza Borghese and down towards the Tiber, with balconies above the rusticated entrance on the Via di Ripetta.

On the death of his uncle, Cardinal Scipione Borghese took up residence and undertook changing the garden to a loggia and hanging garden .

In 1671-76 Carlo Rainaldi
Carlo Rainaldi
Carlo Rainaldi was an Italian architect of the Baroque period.Born in Rome, Rainaldi was one of the leading architects of 17th century Rome, known for a certain grandeur in his designs. He worked at first with his father, Girolamo Rainaldi, a late Mannerist architect in Rome. After his father's...
added new features for Prince Giovan Battista Borghese; the most extensive changes were made on the newly raised ground floor of the long wing extending towards the Tiber, ending with river views, which the Borghese found the most congenial dwelling spaces: Rainaldi added the columnar loggia to Ponzi's end facade (illustration, right), and on the interior a richly stuccoed oval chapel, and the narrow barrel-vaulted galleria, the highly-charged Cortonesque
Pietro da Cortona
Pietro da Cortona, by the name of Pietro Berrettini, born Pietro Berrettini da Cortona, was the leading Italian Baroque painter of his time and also one of the key architects in the emergence of Roman Baroque architecture. He was also an important decorator...
decorative details of which were designed by Giovan Francesco Grimaldi (1606-1680).

The main façades have three stories with two mezzanines
Mezzanine (architecture)
In architecture, a mezzanine or entresol is an intermediate floor between main floors of a building, and therefore typically not counted among the overall floors of a building. Often, a mezzanine is low-ceilinged and projects in the form of a balcony. The term is also used for the lowest balcony in...
inserted between them and the two majestic portals are flanked by columns and a balcony. Through the portal on the Piazza Fontanella Borghese, a view across the courtyard is centred on one of the wall fountains in the garden beyond.

The edifice has a magnificent inner courtyard, surrounded by ninety six granite columns and decorated with statues, and a nympheum and other features, as well as an enclosed garden with three niche wall-fountains built to designs by Johann Paul Schor
Johann Paul Schor
Johann Paul Schor , known in Rome as "Giovanni Paolo Tedesco" , was an Austrian artist. He was the preeminent designer of decorative arts in Baroque Rome, providing drawings for state beds, fireworks, coaches, silver, textiles and even banquet setpieces executed in sugar...
and finished by Rainaldi for Prince Giovan Battista Borghese in 1673. The court has been described as "one of the most spectacular existing, not only in Rome".

The façade towards the Piazza Fontanella Borghese faces another Borghese palace, rebuilt in the 16th century by Scipio Borghese to house the lesser members of the family, the stables and the servants.

The balcony scene in the 1968 film Romeo and Juliet
Romeo and Juliet (1968 film)
Romeo and Juliet is a 1968 British-Italian cinematic adaptation of the William Shakespeare play of the same name.The film was directed and co-written by Franco Zeffirelli, and stars Leonard Whiting and Olivia Hussey. It won Academy Awards for Best Cinematography and Best Costume Design; it was also...
was filmed here.