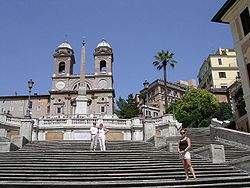 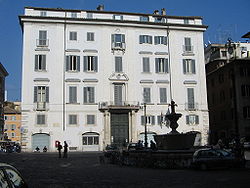 Alessandro Specchi was an Italian
Italy
Italy , officially the Italian Republic languages]] under the European Charter for Regional or Minority Languages. In each of these, Italy's official name is as follows:;;;;;;;;), is a unitary parliamentary republic in South-Central Europe. To the north it borders France, Switzerland, Austria and...
architect and engraver.
Born in Rome
Rome
Rome is the capital of Italy and the country's largest and most populated city and comune, with over 2.7 million residents in . The city is located in the central-western portion of the Italian Peninsula, on the Tiber River within the Lazio region of Italy.Rome's history spans two and a half...
, he trained as an architect under Carlo Fontana
Carlo Fontana
Carlo Fontana was an Italian architect, who was in part responsible for the classicizing direction taken by Late Baroque Roman architecture.-Biography:...
. He also specialized as an engraver
Etching
Etching is the process of using strong acid or mordant to cut into the unprotected parts of a metal surface to create a design in intaglio in the metal...
and made a well known series of plates for prints of vedute
Veduta
A veduta is a highly detailed, usually large-scale painting of a cityscape or some other vista....
or views of Rome

As an architect, he was influenced by Francesco Borromini
Francesco Borromini
Francesco Borromini, byname of Francesco Castelli was an architect from Ticino who, with his contemporaries, Gian Lorenzo Bernini and Pietro da Cortona, was a leading figure in the emergence of Roman Baroque architecture.A keen student of the architecture of Michelangelo and the ruins of...
. His first major constructed work was the design of the Baroque
Baroque
The Baroque is a period and the style that used exaggerated motion and clear, easily interpreted detail to produce drama, tension, exuberance, and grandeur in sculpture, painting, literature, dance, and music...
Porto di Ripetta
Porto di Ripetta
The Porto di Ripetta was a port in the city of Rome. It was situated on the banks of the River Tiber and was designed and built in 1707 by the Italian Baroque architect Alessandro Specchi . Located in front of the church of San Girolamo degli Schiavoni, its low walls with steps descended in...
, the port of Rome, on the banks of the River Tevere or Tiber. This was destroyed in the late 19th century with the development of flood defences and the river bank road of Lungotevere, and replaced by Rome's Ponte Cavour
Ponte Cavour
Ponte Cavour is a bridge in Rome, linking piazza del Porto di Ripetta to lungotevere dei Mellini, in the Campo Marzio and Prati rioni. It also links the area around Piazza Cavour to the area around the Ara Pacis in the Campus Martius....
), and his fountain at the top of the port was moved to a nearby site.

In 1711 he became a member of the Academy of St. Luke
Accademia di San Luca
The Accademia di San Luca, was founded in 1577 as an association of artists in Rome, under the directorship of Federico Zuccari, with the purpose of elevating the work of "artists", which included painters, sculptors and architects, above that of mere craftsmen. Other founders included Girolamo...
, the artists' academy in Rome.

He designed and was involved with alterations to various Roman palaces: he designed the Palazzo de Carolis on the Via del Corso (now the headquarters of the Banco di Roma), the Palazzo Pichini; and made alterations to the Palazzo Verospi and the Palazzo Albani, and additions to the Palazzo del Quirinale. His design for the church of the Bambino Gesu
Suore Oblate del Santo Bambino Gesù
The Suore Oblate del Santo Bambino Gesù is a 'di diritto pontificio' religious institute of women. Its members use the suffix O.B.G. after their names.- History:...
was not carried out due to lack of finance and he added the upper facade to Vignola
Giacomo Barozzi da Vignola
Giacomo Barozzi da Vignola was one of the great Italian architects of 16th century Mannerism. His two great masterpieces are the Villa Farnese at Caprarola and the Jesuits' Church of the Gesù in Rome...
's church of Saint Anne in Vatican .
The source of this article is wikipedia, the free encyclopedia.  The text of this article is licensed under the GFDL.