Encyclopedia
Oscarsborg Fortress is a coastal fortress in the Oslofjord
Oslofjord
The Oslofjord is a bay in the south-east of Norway, stretching from an imaginary line between the Torbjørnskjær and Færder lighthouses and down to Langesund in the south to Oslo in the north....
, close to the small town of Drøbak
Drøbak
Drøbak is an unincorporated city and the centre of the municipality of Frogn, in Akershus county, Norway. The city is located along the Oslofjord, and has 13,358 inhabitants....
. The fortress is situated on two small islets, and on the mainland to the west and east, in the fjord and was military territory until 2003 when it was made a publicly available resort island. The fortress is best known for sinking the German
Nazi Germany
Nazi Germany , also known as the Third Reich , but officially called German Reich from 1933 to 1943 and Greater German Reich from 26 June 1943 onward, is the name commonly used to refer to the state of Germany from 1933 to 1945, when it was a totalitarian dictatorship ruled by...
heavy cruiser
Heavy cruiser
The heavy cruiser was a type of cruiser, a naval warship designed for long range, high speed and an armament of naval guns roughly 203mm calibre . The heavy cruiser can be seen as a lineage of ship design from 1915 until 1945, although the term 'heavy cruiser' only came into formal use in 1930...
Blücher
German cruiser Blücher
Blücher was the second of five heavy cruisers of the German Kriegsmarine, built after the rise of the Nazi Party and the repudiation of the Treaty of Versailles. Named for Gebhard Leberecht von Blücher, the victor of the Battle of Waterloo, the ship was laid down in August 1936 and launched in...
on 9 April 1940. 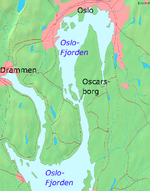 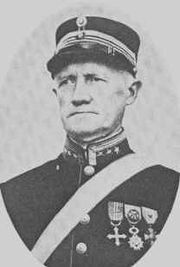 The narrows at Drøbak, called Drøbaksundet is a natural point for the naval defence of Oslo
Oslo
Oslo is a municipality, as well as the capital and most populous city in Norway. As a municipality , it was established on 1 January 1838. Founded around 1048 by King Harald III of Norway, the city was largely destroyed by fire in 1624. The city was moved under the reign of Denmark–Norway's King...
, the capital of Norway. The first defences were constructed during the reign of Christian IV of Denmark and Norway
Christian IV of Denmark
Christian IV was the king of Denmark-Norway from 1588 until his death. With a reign of more than 59 years, he is the longest-reigning monarch of Denmark, and he is frequently remembered as one of the most popular, ambitious and proactive Danish kings, having initiated many reforms and projects...
and were ready in 1644. The fortifications were however not involved in battle during the Hannibal War.

After the war the fortifications were dismantled, and only resurrected for a short period during the 1814 war with Sweden
Swedish campaign against Norway (1814)
The Swedish-Norwegian War, also known as the Campaign against Norway, was fought between Sweden and Norway in the summer of 1814. The war resulted in Norway entering into union with Sweden, but with its own constitution and parliament.-Background:...
.

Around 1830 the discussion started for a renewed fortification of the Drøbak Narrows and the first stage was ready in 1848, the next in 1853. The name of the fortress was given by royal resolution on 23 August 1855 after a visit by the Swedish Norwegian King Oscar I
Oscar I of Sweden
Oscar I was King of Sweden and Norway from 1844 to his death. When, in August 1810, his father Jean-Baptiste Bernadotte was elected Crown Prince of Sweden, Oscar and his mother moved from Paris to Stockholm . Oscar's father was the first ruler of the current House of Bernadotte...
.

By the end of the 19th century the art of war developed rapidly and the new fortress was soon obsolete. The tension was also growing between the two countries in the union and so the Norwegians decided to upgrade the fortress. From 1890 new improved German guns were installed, an underwater barrier was built in 1874-79, and an underwater torpedo
Torpedo
The modern torpedo is a self-propelled missile weapon with an explosive warhead, launched above or below the water surface, propelled underwater towards a target, and designed to detonate either on contact with it or in proximity to it.The term torpedo was originally employed for...
battery was constructed. The main armament was three 28 cm calibre guns manufactured by Krupp
Krupp
The Krupp family , a prominent 400-year-old German dynasty from Essen, have become famous for their steel production and for their manufacture of ammunition and armaments. The family business, known as Friedrich Krupp AG Hoesch-Krupp, was the largest company in Europe at the beginning of the 20th...
. There were also a number of guns with smaller calibres (15 cm and 57 mm) on the mainland. An underwater barrier went from the main islet of Kaholmen and south-west to Hurum
Hurum
Hurum is a municipality in Buskerud county, Norway. The administrative centre of the municipality is the village Klokkarstua. The municipality of Hurum was established on 1 January 1838 . The small village of Holmsbu was granted town status in 1847, but it did not become a municipality of its own...
on the western side of the fjord, thus making it impossible for large vessels to sail west of the fortress.

Having been constructed in 1898-1901, and taken into service on 15 July 1901, the underground torpedo facility remained one of the few Norwegian defence installations unknown to German military intelligence at the point of the 9 April 1940 invasion. The battery was one of two in Norway and differed from the other torpedo battery, at Kvarven Fort
Kvarven fort
Kvarven Fort is a mountain fort strategically located by the coastal entry to Bergen, Norway.- Construction :In the late 1800s, relations between the two countries in the union between Sweden and Norway had gradually worsened; Norwegians were discontent and wanted independence. To account for the...
, in that it was designed to launch its torpedoes from under the water level, instead of by torpedo tube
Torpedo tube
A torpedo tube is a device for launching torpedoes. There are two main types of torpedo tube: underwater tubes fitted to submarines and some surface ships, and deck-mounted units installed aboard surface vessels...
from above ground as was the case with the battery at Kvarven outside Bergen
Bergen
Bergen is the second largest city in Norway with a population of as of , . Bergen is the administrative centre of Hordaland county. Greater Bergen or Bergen Metropolitan Area as defined by Statistics Norway, has a population of as of , ....
.

At Oscarsborg the torpedo battery is a concrete construction inside a cave mined into the rock of the North Kaholmen island. Two torpedoes are loaded side by side, in an open steel frame. Then the frames are lowered like an elevator down in the water to the tunnels below. When fired, the torpedo's own compressed air engine was started and it propelled itself. The battery has three torpedo tunnels which could fire six torpedoes without reloading and a total of nine torpedoes were stored and ready for use. Each weapon carried a 100 kg TNT warhead and targets were spotted from an observation bunker just above the battery.

The torpedoes were delivered in 1900 from the Whitehead
Robert Whitehead
Robert Whitehead was an English engineer. He developed the first effective self-propelled naval torpedo. His company, located in the Austrian naval centre in Fiume, was the world leader in torpedo development and production up to the First World War.- Early life:He was born the son of a...
torpedo factory in Fiume
Rijeka
Rijeka is the principal seaport and the third largest city in Croatia . It is located on Kvarner Bay, an inlet of the Adriatic Sea and has a population of 128,735 inhabitants...
, then part of Austria-Hungary
Austria-Hungary
Austria-Hungary , more formally known as the Kingdoms and Lands Represented in the Imperial Council and the Lands of the Holy Hungarian Crown of Saint Stephen, was a constitutional monarchic union between the crowns of the Austrian Empire and the Kingdom of Hungary in...
. A second observation bunker is situated just outside the entrance to the battery.

When Norway was invaded
Operation Weserübung
Operation Weserübung was the code name for Germany's assault on Denmark and Norway during the Second World War and the opening operation of the Norwegian Campaign...
on 9 April 1940, all of the fortress' armament was over 40 years old, and of German
German Empire
The German Empire refers to Germany during the "Second Reich" period from the unification of Germany and proclamation of Wilhelm I as German Emperor on 18 January 1871, to 1918, when it became a federal republic after defeat in World War I and the abdication of the Emperor, Wilhelm II.The German...
origin. Both the guns and the torpedo battery worked flawlessly when Oscarsborg encountered one of the German invasion flotillas; they sank the heavy cruiser Blücher
German cruiser Blücher
Blücher was the second of five heavy cruisers of the German Kriegsmarine, built after the rise of the Nazi Party and the repudiation of the Treaty of Versailles. Named for Gebhard Leberecht von Blücher, the victor of the Battle of Waterloo, the ship was laid down in August 1936 and launched in...
and threw back the German naval force heading for Oslo, thus managing to save the Norwegian King and government from being taken prisoner.

The Fortress was returned to Norwegian control on 12 May 1945 when Captain Thorleif Unneberg took command of the fortifications and raised the Norwegian flag following the capitulation of all German forces in Norway four days earlier. The flag in question was the same that had flown over the fortress until it was captured by the Germans in April 1940. Colonel Birger Eriksen was present on the occasion and held a speech.

During the Cold War
Cold War
The Cold War was the continuing state from roughly 1946 to 1991 of political conflict, military tension, proxy wars, and economic competition between the Communist World—primarily the Soviet Union and its satellite states and allies—and the powers of the Western world, primarily the United States...
Oscarsborg formed a last line of defence for the capital city, with the underground torpedo battery remaining secretly active up until 1 January 1993, having been modernized in the 1980s.

After the deactivation of the last weapons systems, the remaining military activity on Oscarsborg consisted of the Coastal Artillery officer training programme. The officer school was officially shut down on 28 June 2002.

The fortress is now largely a civilian resort and attraction, open for visitors. The scenic surroundings is much used for conferences and excursions. Visitors take a short motor launch trip from Drøbak
Drøbak
Drøbak is an unincorporated city and the centre of the municipality of Frogn, in Akershus county, Norway. The city is located along the Oslofjord, and has 13,358 inhabitants....
.