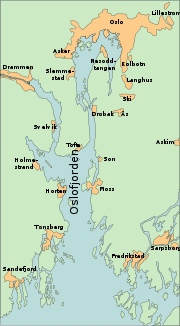 The Oslofjord is a bay
Bay
A bay is an area of water mostly surrounded by land. Bays generally have calmer waters than the surrounding sea, due to the surrounding land blocking some waves and often reducing winds. Bays also exist as an inlet in a lake or pond. A large bay may be called a gulf, a sea, a sound, or a bight...
in the south-east of Norway
Norway
Norway , officially the Kingdom of Norway, is a Nordic unitary constitutional monarchy whose territory comprises the western portion of the Scandinavian Peninsula, Jan Mayen, and the Arctic archipelago of Svalbard and Bouvet Island. Norway has a total area of and a population of about 4.9 million...
, stretching from an imaginary line between the Torbjørnskjær
Torbjørnskjær fyrstasjon
Torbjørnskjær Lighthouse is a fully automated coastal lighthouse situated on a skerry in the archipelago municipality of Hvaler, Norway. It marks the east side of the entrance to the Oslofjord, with Færder marking the west. The light is powered by a wind generator on the island. Landing conditions...
and Færder lighthouses and down to Langesund in the south to Oslo
Oslo
Oslo is a municipality, as well as the capital and most populous city in Norway. As a municipality , it was established on 1 January 1838. Founded around 1048 by King Harald III of Norway, the city was largely destroyed by fire in 1624. The city was moved under the reign of Denmark–Norway's King...
in the north.
In spite of its name, the Oslofjord is not a fjord
Fjord
Geologically, a fjord is a long, narrow inlet with steep sides or cliffs, created in a valley carved by glacial activity.-Formation:A fjord is formed when a glacier cuts a U-shaped valley by abrasion of the surrounding bedrock. Glacial melting is accompanied by rebound of Earth's crust as the ice...
in the geological sense - in Norwegian
Norwegian language
Norwegian is a North Germanic language spoken primarily in Norway, where it is the official language. Together with Swedish and Danish, Norwegian forms a continuum of more or less mutually intelligible local and regional variants .These Scandinavian languages together with the Faroese language...
the term "fjord" can refer to a wide range of waterways.
The bay is divided into the inner (indre) and outer (ytre) Oslofjord at the point of the 17 km long and narrow Drøbaksundet.

The entire population situated around the Oslofjord including Oslo is about 2.1 million

Each of the islands in the innermost part of the fjord has its own identity and distinguishing history. Among them are Hovedøya, Lindøya, Nakholmen, Bleikøya, Gressholmen, and Langøyene. These islands can easily be reached with the Oslo-boats from Vippetangen. Hovedøya is most famous for its monestary ruins, Gressholmen for its rabbits, Nakholmen, Bleikøya, Lindøya for their cosy cabins at the water’s edge, and finally Langøyene for its camping possibilities and pleasant beach.

In the summer there are boats of all sizes on the fjord, and it is possible to go kayaking, canoeing, fishing, and sailing. There are many activities for both adults and children.

The Oldest settlements in the area surrounding Oslo fjord date from the Stone Age and Bronze Age. And it was here on the eastern and western shores that three of the best preserved viking ships were unearthed. In historical times, this bay was known by the current name of the region, Viken (the bay).

Norwegian painter Edward Munch had a cottage and studio in Åsgårdstrand
Åsgårdstrand
Åsgårdstrand is a city in Vestfold, Norway. It is also the name of a former independent municipality and a center of trade. The town is situated 10 km south of Horten, 10 km north of Tønsberg and 100 km south of Oslo by the west coast of the Oslofjord.From 2007, the town has had the...
on the fjord and the Oslofjord appears in several of his paintings, including The Scream
The Scream
Scream is the title of Expressionist paintings and prints in a series by Norwegian artist Edvard Munch, showing an agonized figure against a blood red sky...
and Girls on the Pier.

The fjord was the scene of a key event in the German invasion of Norway in 1940. The invasion included a planned landing of 1,000 troops transported by ship to Oslo. Colonel Eriksen, Commander of the Oscarsborg fortress near Drøbak, mainly maintained for historical purposes, sank the German heavy cruiser
Heavy cruiser
The heavy cruiser was a type of cruiser, a naval warship designed for long range, high speed and an armament of naval guns roughly 203mm calibre . The heavy cruiser can be seen as a lineage of ship design from 1915 until 1945, although the term 'heavy cruiser' only came into formal use in 1930...
Blücher
German cruiser Blücher
Blücher was the second of five heavy cruisers of the German Kriegsmarine, built after the rise of the Nazi Party and the repudiation of the Treaty of Versailles. Named for Gebhard Leberecht von Blücher, the victor of the Battle of Waterloo, the ship was laid down in August 1936 and launched in...
in the Drøbak
Drøbak
Drøbak is an unincorporated city and the centre of the municipality of Frogn, in Akershus county, Norway. The city is located along the Oslofjord, and has 13,358 inhabitants....
narrows.

The fortress's resistance blocked the route to Oslo, thus delaying the rest of the group long enough for the royal family, government, parliament, and national treasury to be evacuated. The result was that Norway never surrendered to the Germans, leaving the Quisling
Vidkun Quisling
Vidkun Abraham Lauritz Jonssøn Quisling was a Norwegian politician. On 9 April 1940, with the German invasion of Norway in progress, he seized power in a Nazi-backed coup d'etat that garnered him international infamy. From 1942 to 1945 he served as Minister-President, working with the occupying...
government illegitimate and permitting Norway to participate as an ally
Allies of World War II
The Allies of World War II were the countries that opposed the Axis powers during the Second World War . Former Axis states contributing to the Allied victory are not considered Allied states...
in the war
World War II
World War II, or the Second World War , was a global conflict lasting from 1939 to 1945, involving most of the world's nations—including all of the great powers—eventually forming two opposing military alliances: the Allies and the Axis...
, rather than as a conquered nation.