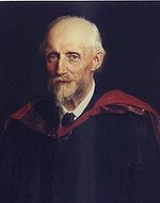 Encyclopedia
Osborne Reynolds FRS (23 August 1842 – 21 February 1912) was a prominent innovator in the understanding of fluid dynamics
Fluid dynamics
In physics, fluid dynamics is a sub-discipline of fluid mechanics that deals with fluid flow—the natural science of fluids in motion. It has several subdisciplines itself, including aerodynamics and hydrodynamics...
. Separately, his studies of heat transfer between solids and fluids brought improvements in boiler and condenser design.

Osborne Reynolds was born in Belfast
Belfast
Belfast is the capital of and largest city in Northern Ireland. By population, it is the 14th biggest city in the United Kingdom and second biggest on the island of Ireland . It is the seat of the devolved government and legislative Northern Ireland Assembly...
and moved with his parents soon afterward to Dedham, Essex
Dedham, Essex
Dedham is a village within the borough of Colchester in northeast Essex, England, situated on the River Stour and on the border of Essex and Suffolk...
. His father worked as a school headmaster and clergyman, but was also a very able mathematician with a keen interest in mechanics. The father took out a number of patents for improvements to agricultural equipment, and the son credits him with being his chief teacher as a boy. Osborne Reynolds attended Queens' College, Cambridge
Queens' College, Cambridge
Queens' College is a constituent college of the University of Cambridge, England.The college was founded in 1448 by Margaret of Anjou , and refounded in 1465 by Elizabeth Woodville...
and graduated in 1867 as the seventh wrangler in mathematics
Mathematics
Mathematics is the study of quantity, space, structure, and change. Mathematicians seek out patterns and formulate new conjectures. Mathematicians resolve the truth or falsity of conjectures by mathematical proofs, which are arguments sufficient to convince other mathematicians of their validity...
. In 1868 he was appointed professor of engineering
Engineering
Engineering is the discipline, art, skill and profession of acquiring and applying scientific, mathematical, economic, social, and practical knowledge, in order to design and build structures, machines, devices, systems, materials and processes that safely realize improvements to the lives of...
at Owens College in Manchester
Manchester
Manchester is a city and metropolitan borough in Greater Manchester, England. According to the Office for National Statistics, the 2010 mid-year population estimate for Manchester was 498,800. Manchester lies within one of the UK's largest metropolitan areas, the metropolitan county of Greater...
now University of Manchester
University of Manchester
The University of Manchester is a public research university located in Manchester, United Kingdom. It is a "red brick" university and a member of the Russell Group of research-intensive British universities and the N8 Group...
, becoming in that year one of the first professors in UK university history to hold the title of "Professor of Engineering". This professorship had been newly created and financed by a group of manufacturing industrialists in the Manchester area, and they also had a leading role in selecting the 25 year old Reynolds to fill the position.

Reynolds showed an early aptitude and liking for the study of mechanics. In his late teens, for the year before entering university, he went to work as an apprentice at the workshop of Edward Hayes, a well known shipbuilder in Stony Stratford
Stony Stratford
Stony Stratford is a constituent town of Milton Keynes and is a civil parish with a town council within the Borough of Milton Keynes. It is in the north west corner of Milton Keynes, bordering Northamptonshire and separated from it by the River Great Ouse...
, where he obtained practical experience in the manufacture and fitting out of coastal steamers (and thus gained an early appreciation of the practical value of understanding fluid dynamics). For the year immediately following his graduation from Cambridge he again took up a post with an engineering firm, this time as a practising civil engineer in the London (Croydon
Croydon
Croydon is a town in South London, England, located within the London Borough of Croydon to which it gives its name. It is situated south of Charing Cross...
) sewage transport system. He had chosen to study mathematics at Cambridge because, in his own words in his 1868 application for the professorship, "From my earliest recollection I have had an irresistible liking for mechanics and the physical laws on which mechanics as a science is based.... my attention drawn to various mechanical phenomena, for the explanation of which I discovered that a knowledge of mathematics was essential."

Reynolds remained at Owens College for the rest of his career — in 1880 the college became a constituent college of the newly founded Victoria University
Victoria University (UK)
Victoria University was an English federal university established by Royal Charter, 20 April 1880 at Manchester: a university for the North of England open to affiliation by colleges such as Owens College which immediately did so. University College Liverpool joined the University in 1884, followed...
. He was elected a Fellow of the Royal Society in 1877 and awarded the Royal Medal
Royal Medal
The Royal Medal, also known as The Queen's Medal, is a silver-gilt medal awarded each year by the Royal Society, two for "the most important contributions to the advancement of natural knowledge" and one for "distinguished contributions in the applied sciences" made within the Commonwealth of...
in 1888. He retired in 1905.

His publications in fluid dynamics began in the early 1870s. His final theoretical model published in the mid 1890s is still the standard mathematical framework used today. Examples of titles from his more groundbreaking reports:

Improvements in Apparatus for Obtaining Motive Power from Fluids and also for Raising or Forcing Fluids. (1875)
An experimental investigation of the circumstances which determine whether the motion of water in parallel channels shall be direct or sinuous and of the law of resistance in parallel channels. (1883)
On the dynamical theory of incompressible viscous fluids and the determination of the criterion. (1895)

Reynolds' contributions to fluid mechanics were not lost on ship designers ("naval architects"). The ability to make a small scale model of a ship, and extract useful predictive data with respect to a full size ship, depends directly on the experimentalist applying Reynolds' turbulence principles to friction drag computations, along with a proper application of William Froude
William Froude
William Froude was an English engineer, hydrodynamicist and naval architect. He was the first to formulate reliable laws for the resistance that water offers to ships and for predicting their stability....
's theories of gravity wave energy and propagation. Reynolds himself had a number of papers concerning ship design published in Transactions of the Institution of Naval Architects.

Reynolds published about seventy science and engineering research reports. When towards the end of his career these were republished as a collection they filled three volumes. For a catalog and short summaries of them see and. Areas covered besides fluid dynamics included thermodynamics, kinetic theory of gases, condensation of steam, screw-propeller-type ship propulsion, turbine-type ship propulsion, hydraulic brakes, hydrodynamic lubrication, and laboratory apparatus for better measurement of Joule
Joule
The joule ; symbol J) is a derived unit of energy or work in the International System of Units. It is equal to the energy expended in applying a force of one newton through a distance of one metre , or in passing an electric current of one ampere through a resistance of one ohm for one second...
's mechanical equivalent of heat.

One of the subjects that Reynolds studied in the 1880s was the properties of granular material
Granular material
A granular material is a conglomeration of discrete solid, macroscopic particles characterized by a loss of energy whenever the particles interact . The constituents that compose granular material must be large enough such that they are not subject to thermal motion fluctuations...
s, including dilatant
Dilatant
A dilatant material is one in which viscosity increases with the rate of shear strain. Such a shear thickening fluid, also known by the acronym STF, is an example of a non-Newtonian fluid....
materials. In 1903 appeared his 250-page book The Sub-Mechanics of the Universe, in which he tried to generalise the mechanics of granular materials to be "capable of accounting for all the physical evidence, as we know it, in the Universe". The ideas were extremely difficult to understand or evaluate, and in any case were overtaken by other developments in physics around the same time.