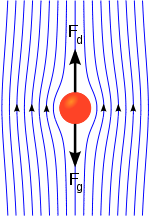 Laminar flow, sometimes known as streamline
Streamlines, streaklines and pathlines
Fluid flow is characterized by a velocity vector field in three-dimensional space, within the framework of continuum mechanics. Streamlines, streaklines and pathlines are field lines resulting from this vector field description of the flow...
flow, occurs when a fluid flows in parallel layers, with no disruption between the layers. At low velocities the fluid tends to flow without lateral mixing, and adjacent layers slide past one another like playing cards. There are no cross currents perpendicular to the direction of flow, nor eddies or swirls of fluids. In laminar flow the motion of the particles of fluid is very orderly with all particles moving in straight lines parallel to the pipe walls.
In fluid dynamics
Fluid dynamics
In physics, fluid dynamics is a sub-discipline of fluid mechanics that deals with fluid flow—the natural science of fluids in motion. It has several subdisciplines itself, including aerodynamics and hydrodynamics...
, laminar flow is a flow regime characterized by high momentum diffusion
Momentum diffusion
Momentum diffusion refers to the diffusion, or spread of momentum between particles of matter, usually in the liquid state....
and low momentum convection
Convection
Convection is the movement of molecules within fluids and rheids. It cannot take place in solids, since neither bulk current flows nor significant diffusion can take place in solids....
.

When a fluid is flowing through a closed channel such as a pipe or between two flat plates, either of two types of flow may occur depending on the velocity of the fluid: laminar flow or turbulent flow. Laminar flow is the opposite of turbulent flow which occurs at higher velocities where eddies or small packets of fluid particles form leading to lateral mixing. In nonscientific terms laminar flow is "smooth", while turbulent flow is "rough."

The type of flow occurring in a fluid in a channel is important in fluid dynamics problems. The dimensionless Reynolds number is an important parameter in the equations that describe whether flow conditions lead to laminar or turbulent flow. In the case of flow through a straight pipe with a circular cross-section, at a Reynolds number below the critical value of approximately 2040 fluid motion will ultimately be laminar, whereas at larger Reynolds number the flow can be turbulent. The Reynolds number delimiting laminar and turbulent flow depends on the particular flow geometry, and moreover, the transition from laminar flow to turbulence can be sensitive to disturbance levels and imperfections present in a given configuration.

When the Reynolds number is much less than 1, Creeping motion or Stokes flow occurs. This is an extreme case of laminar flow where viscous (friction) effects are much greater than inertial forces. The common application of laminar flow would be in the smooth flow of a viscous liquid through a tube or pipe. In that case, the velocity of flow varies from zero at the walls to a maximum along the centerline of the vessel. The flow profile of laminar flow in a tube can be calculated by dividing the flow into thin cylindrical elements and applying the viscous force to them.