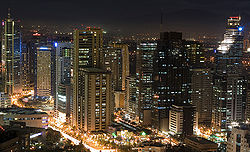 Ortigas Center is Metro Manila
Metro Manila
Metropolitan Manila , the National Capital Region , or simply Metro Manila, is the metropolitan region encompassing the City of Manila and its surrounding areas in the Philippines...
's second most important Philippine financial district
Financial District
A Financial District is the central area in some large cities where banks, insurance companies and other large corporations have head offices. Financial districts are often home to skyscrapers...
-cum-central business district
Central business district
A central business district is the commercial and often geographic heart of a city. In North America this part of a city is commonly referred to as "downtown" or "city center"...
after the Makati
Makati City
The City of Makati is one of the 17 cities that make up Metro Manila, one of the most populous metropolitan areas in the world. Makati is the financial center of the Philippines and one of the major financial, commercial and economic hubs in Asia...
Financial and Central Business District in Makati City. With an area of at least 100 hectares, the district
District
Districts are a type of administrative division, in some countries managed by a local government. They vary greatly in size, spanning entire regions or counties, several municipalities, or subdivisions of municipalities.-Austria:...
is located at the boundaries
Border
Borders define geographic boundaries of political entities or legal jurisdictions, such as governments, sovereign states, federated states and other subnational entities. Some borders—such as a state's internal administrative borders, or inter-state borders within the Schengen Area—are open and...
of Pasig City
Pasig City
The City of Pasig is one of the city municipalities of Metro Manila in the Philippines and was the former capital of the province of Rizal prior to the formation of this grouping of cities designated as the National Capital Region...
, Mandaluyong City
Mandaluyong City
The City of Mandaluyong is one of the cities and municipalities that comprise Metro Manila in the Philippines. It is bordered on the west by the country's capital, Manila, to the north by San Juan City, to the east by Quezon City and Pasig City, and by Makati City to the south...
, and Quezon City
Quezon City
Quezon City is the former capital and the most populous city in the Philippines. Located on the island of Luzon, Quezon City is one of the cities and municipalities that make up Metro Manila, the National Capital Region. The city was named after Manuel L...
. It is governed by Ortigas Center Association, Inc.

Ortigas Center is home to many shopping mall
Shopping mall
A shopping mall, shopping centre, shopping arcade, shopping precinct or simply mall is one or more buildings forming a complex of shops representing merchandisers, with interconnecting walkways enabling visitors to easily walk from unit to unit, along with a parking area — a modern, indoor version...
s, office and condominium skyscraper
Skyscraper
A skyscraper is a tall, continuously habitable building of many stories, often designed for office and commercial use. There is no official definition or height above which a building may be classified as a skyscraper...
s and other building complexes, and nightlife bars and restaurant
Restaurant
A restaurant is an establishment which prepares and serves food and drink to customers in return for money. Meals are generally served and eaten on premises, but many restaurants also offer take-out and food delivery services...
s. These include the St. Francis Square
St. Francis Square
The St. Francis Square is a complex of three buildings in Ortigas Center. The most notable buildings in the complex are the BSA Twin Towers, which is designed by R. Villarosa Architects using tube-frame structural design. The twin towers are both counting 55-storey and it rests on a reinforced...
, the Asian Development Bank
Asian Development Bank
The Asian Development Bank is a regional development bank established on 22 August 1966 to facilitate economic development of countries in Asia...
compound, the Oakwood Premier serviced apartments and a Shangri-La
Shangri-La Hotels and Resorts
Hong Kong-based Shangri-La Hotels and Resorts runs the Shangri-La, Kerry and Traders brands of hotels.-Companies:*Shangri-La Asia Limited is incorporated in Bermuda with limited liability...
hotel. It is also the headquarters of San Miguel Corporation
San Miguel Corporation
Established in 1890 as a brewery, San Miguel Corporation is Southeast Asia's largest publicly listed food, beverage and packaging company with over 17,000 employees in over 100 major facilities throughout the Asia-Pacific....
, Jollibee Foods Corporation
Jollibee
Jollibee Foods Corporation is the parent company of Jollibee, a fast-food restaurant chain based in the Philippines. Among JFC's popular brands are Jollibee, Chowking, Greenwich, Red Ribbon, Caffe Ti-amo, Mang Inasal and Burger King...
, the Philippine branch of HSBC
HSBC
HSBC Holdings plc is a global banking and financial services company headquartered in Canary Wharf, London, United Kingdom. it is the world's second-largest banking and financial services group and second-largest public company according to a composite measure by Forbes magazine...
, and Robinsons Galleria
Robinsons Galleria
Robinsons Galleria is a large shopping mall located at EDSA corner Ortigas Avenue, Quezon City just near SM Megamall. It is Robinsons' flagship mall. The mall is owned by John Gokongwei, founder of JG Summit Holdings and Robinsons Land Corp. It was built in 1990 with a total gross floor area of...
. It also home to the Banco de Oro main office owned by mall taipan Henry Sy, Sr. SM Megamall
SM Megamall
SM Megamall is a huge shopping mall located in the Ortigas business district of Metro Manila, Philippines. It is the 3rd SM Supermall developed and operated by SM Prime Holdings, the largest mall operator in the Philippines owned by Henry Sy Sr. The mall has two buildings interconnected with a bridge...
, the largest mall in the country prior to the completion of the SM Mall of Asia
SM Mall of Asia
SM Mall of Asia is a shopping mall owned and developed by SM Prime Holdings, the largest mall developer and owner in the Philippines. SM Mall of Asia is the 2nd largest mall in the Philippines after SM City North EDSA, 3rd largest shopping mall in Asia and the 4th largest shopping mall in the world...
, is also in the Center along EDSA, as is the The Medical City
The Medical City
The Medical City Philippines is a tertiary health care organization with a medical staff of 1,100 physicians and 2,200 support personnel, serving 40,000 in-patients and 400,000 out-patients annually.Joint Commission International Accreditation...
, one of the three hospitals in the country accredited by the Joint Commission on International Accreditation.

Ortigas Center is surrounded by the street
Street
A street is a paved public thoroughfare in a built environment. It is a public parcel of land adjoining buildings in an urban context, on which people may freely assemble, interact, and move about. A street can be as simple as a level patch of dirt, but is more often paved with a hard, durable...
s of EDSA
Epifanio de los Santos Avenue
Epifanio de los Santos Avenue , formerly known as Highway 54, is the main circumferential road and highway of Metro Manila in the Philippines. It is an important commuting artery between the northern and southern parts of the metropolitan area...
to the west, Ortigas Avenue to the north, Meralco Avenue to the east, and Shaw Boulevard to the south.

Ortigas Center began as the 4,033-hectare "Hacienda de Mandaloyon", an estate from the Augustinian Order
Augustinians
The term Augustinians, named after Saint Augustine of Hippo , applies to two separate and unrelated types of Catholic religious orders:...
. In the following years, there were several changes of partners. Then, on July 10, 1931, the company was incorporated “Ortigas, Madrigal y cia., S. en C.” as a limited partnership by shares (sociedad comanditaria por acciones). The parties to the partnership were Francisco Ortigas (Don Paco), Vicente Madrigal, B.C.M. Johnston, Fulgencio Borromeo, Clyde A. Dewitt and Manuel L. Quezon.

When Ortigas & Company acquired the estate, it was a virtual wasteland. The vision of the management, headed by Atty. Francisco Ortigas, Jr., who was President and Chairman at that time, turned it into a progressive industrial, commercial, and residential urban complex.