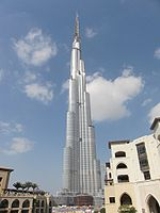 Overview
A skyscraper is a tall, continuously habitable building of many stories, often designed for office and commercial use. There is no official definition or height above which a building may be classified as a skyscraper. One common feature is that skyscrapers tend to make use of a steel framework structure from which walls are suspended, rather than having load-bearing walls as seen in conventional buildings.

As there is no official definition of what constitutes a skyscraper, a relatively small building may be considered one if it protrudes well above its built environment and changes the overall skyline
Skyline
A skyline is the overall or partial view of a city's tall buildings and structures consisting of many skyscrapers in front of the sky in the background. It can also be described as the artificial horizon that a city's overall structure creates. Skylines serve as a kind of fingerprint of a city, as...
.

You managed to leave out the John Hancock Center in Chicago in your list and description of Skyscrapers (on this link); a pretty big omission !
More
x