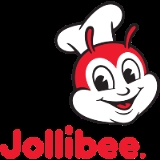 Overview
Jollibee Foods Corporation is the parent company of Jollibee, a fast-food restaurant chain based in the Philippines
Philippines
The Philippines , officially known as the Republic of the Philippines , is a country in Southeast Asia in the western Pacific Ocean. To its north across the Luzon Strait lies Taiwan. West across the South China Sea sits Vietnam...
. Among JFC's popular brands are Jollibee, Chowking, Greenwich, Red Ribbon, Caffe Ti-amo, Mang Inasal (70%) and Burger King (54%) . Since its inception, Jollibee has become an increasingly profitable fast-food chain with 686 restaurants in the Philippines and 57 in other countries employing 29,216 workers.

What makes jollibee the leading fastfood restaurant in tthe country...what makes them a success?

How well did you segregate your waste?

Who is your market?
More

Not happy with Jollibee service in my area-banilad talamban
More

Encyclopedia
Jollibee Foods Corporation is the parent company of Jollibee, a fast-food restaurant chain based in the Philippines
Philippines
The Philippines , officially known as the Republic of the Philippines , is a country in Southeast Asia in the western Pacific Ocean. To its north across the Luzon Strait lies Taiwan. West across the South China Sea sits Vietnam...
. Among JFC's popular brands are Jollibee, Chowking, Greenwich, Red Ribbon, Caffe Ti-amo, Mang Inasal (70%) and Burger King (54%) . Since its inception, Jollibee has become an increasingly profitable fast-food chain with 686 restaurants in the Philippines and 57 in other countries employing 29,216 workers. Including all its brands, JFC has 1,804 stores worldwide and total sales of more than US$1 billion as of December 2008 .

In addition to its subsidiaries, JFC was the Philippine franchise holder of Délifrance
Délifrance
Délifrance is a bakery company that serves "French style" bakery products in over 50 countries on five continents. It has been in operation for more than 25 years....
until late-2010, when both companies severed their ties . All former Délifrance branches now operate as CafeFrance, which is owned and operated by Euro-Med Laboratories Philippines, Inc.

To date, the first branch of Jollibee is still operating in Coronet, Cubao under the Jollibee Foods Corp. 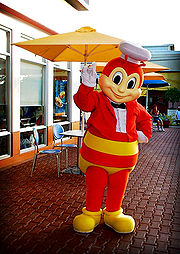 In 1975 Tony Tan Caktiong
Tony Tan Caktiong
Tony Tan Caktiong is the founder and current Chairman and CEO of Philippine fast food chain Jollibee. He attended high school at Chiang Kai Shek College and graduated from the University of Santo Tomas with a degree in chemical engineering...
and his family opened a Magnolia Ice Cream parlor in Cubao. Sometime in 1978, Caktiong and his brothers and sisters engaged the services of a management consultant, Manuel C. Lumba. Lumba shifted the business focus from ice cream to burgers, after his studies showed that a much larger market was waiting to be served. Lumba became Caktiong's first business and management mentor.

The Jollibee mascot was inspired by local and foreign children's books. Lumba created the product names "Yumburger" and "ChickenJoy". He had the company incorporated and leased a house on Main St. in Cubao, Quezon City as the first headquarters. Lumba formulated a long-term marketing strategy: listing up a number of consumer promotions and traffic building schemes. Caktiong stressed that developing internal strengths was critical. The stores were re-designed, the service transformed into a full self-service, fast-food operation with drive-through
Drive-through
A drive-through, or drive-thru, is a type of service provided by a business that allows customers to purchase products without leaving their cars. The format was first pioneered in the United States in the 1930s but has since spread to other countries. The first recorded use of a bank using a drive...
s. Not long after, Caktiong and Lumba went on an observation tour in the United States, attended food service and equipment conventions. Caktiong placed Lumba in charge of franchise development.

Jollibee purchased 70% of Taipei
Taipei
Taipei City is the capital of the Republic of China and the central city of the largest metropolitan area of Taiwan. Situated at the northern tip of the island, Taipei is located on the Tamsui River, and is about 25 km southwest of Keelung, its port on the Pacific Ocean...
restaurant Lao Dong in June and Chun Shui Tang tea house
Tea house
A tea house or tearoom is a venue centered on drinking tea. Its function varies widely depending on the culture, and some cultures have a variety of distinct tea-centered houses or parlors that all qualify under the English language term "tea house" or "tea room."-Asia:In Central Asia this term...
in 2006. In 2004, Jollibee acquired Chinese fast food chain Yonghe Dawang
Yonghe Dawang
Yonghe Dawang is a Chinese fast-food restaurant that specializes in noodles. Yonghe Dawang opened its first restaurant in Shanghai in Dec, 12, 1995. Today Yonghe has branches throughout China, with over 70 restaurants in major Chinese cities including Shanghai, Beijing, Shenzhen, Hangzhou, Jinan,...
for $22.5 million. Jollibee entered into a joint-venture contract with US-based Chow Fun Holdings LLC, the developer and owner of Jinja Bar Bistro in New Mexico
New Mexico
New Mexico is a state located in the southwest and western regions of the United States. New Mexico is also usually considered one of the Mountain States. With a population density of 16 per square mile, New Mexico is the sixth-most sparsely inhabited U.S...
, in which Jollibee will have a 12% stake for $950,000.

On August 26, 2008, Jollibee formally signed a P2.5 billion ($55.5 million) deal with Beijing
Beijing
Beijing , also known as Peking , is the capital of the People's Republic of China and one of the most populous cities in the world, with a population of 19,612,368 as of 2010. The city is the country's political, cultural, and educational center, and home to the headquarters for most of China's...
-based Hong Zhuang Yuan through its wholly owned subsidiary Jollibee Worldwide Pte. Ltd. The sale is subject to the approval of China's Ministry of Commerce.

On October 19, 2010, Jollibee acquired 70% share of Mang Inasal
Mang Inasal
Mang Inasal is a common fast food chain in the Philippines.-History:Edgar Sia II engaged in business at twenty years of age. He opened the first branch at the Robinson's Mall Carpark-Iloilo....
, a Filipino food chain specializing in barbecued chicken, for P3 billion ($68.8 million). The same month, Jollibee signed a deal to acquire 55 percent of China
China
Chinese civilization may refer to:* China for more general discussion of the country.* Chinese culture* Greater China, the transnational community of ethnic Chinese.* History of China* Sinosphere, the area historically affected by Chinese culture...
's Guangxi
Guangxi
Guangxi, formerly romanized Kwangsi, is a province of southern China along its border with Vietnam. In 1958, it became the Guangxi Zhuang Autonomous Region of the People's Republic of China, a region with special privileges created specifically for the Zhuang people.Guangxi's location, in...
San Ping Wang Food and Beverage Management Co. Ltd., operators of the San Pin Wang beef noodle business for 30 million RMB.

Jollibee is an American-style fast-food restaurant with Filipino-influenced dishes specializing in burgers, spaghetti, chicken and some local Filipino dishes. In the Philippines, Jollibee serves Coca-Cola
The Coca-Cola Company
The Coca-Cola Company is an American multinational beverage corporation and manufacturer, retailer and marketer of non-alcoholic beverage concentrates and syrups. The company is best known for its flagship product Coca-Cola, invented in 1886 by pharmacist John Stith Pemberton in Columbus, Georgia...
products for its beverages; in overseas markets, the chain serves Pepsi
PepsiCo
PepsiCo Inc. is an American multinational corporation headquartered in Purchase, New York, United States, with interests in the manufacturing, marketing and distribution of grain-based snack foods, beverages, and other products. PepsiCo was formed in 1965 with the merger of the Pepsi-Cola Company...
products.

Currently the largest fast-food chain in the country, it also has locations in the United States
United States
The United States of America is a federal constitutional republic comprising fifty states and a federal district...
, Saudi Arabia
Saudi Arabia
The Kingdom of Saudi Arabia , commonly known in British English as Saudi Arabia and in Arabic as as-Sa‘ūdiyyah , is the largest state in Western Asia by land area, constituting the bulk of the Arabian Peninsula, and the second-largest in the Arab World...
, Hong Kong
Hong Kong
Hong Kong is one of two Special Administrative Regions of the People's Republic of China , the other being Macau. A city-state situated on China's south coast and enclosed by the Pearl River Delta and South China Sea, it is renowned for its expansive skyline and deep natural harbour...
, Vietnam
Vietnam
Vietnam – sometimes spelled Viet Nam , officially the Socialist Republic of Vietnam – is the easternmost country on the Indochina Peninsula in Southeast Asia. It is bordered by China to the north, Laos to the northwest, Cambodia to the southwest, and the South China Sea –...
, Indonesia
Indonesia
Indonesia , officially the Republic of Indonesia , is a country in Southeast Asia and Oceania. Indonesia is an archipelago comprising approximately 13,000 islands. It has 33 provinces with over 238 million people, and is the world's fourth most populous country. Indonesia is a republic, with an...
, United Arab Emirates
United Arab Emirates
The United Arab Emirates, abbreviated as the UAE, or shortened to "the Emirates", is a state situated in the southeast of the Arabian Peninsula in Western Asia on the Persian Gulf, bordering Oman, and Saudi Arabia, and sharing sea borders with Iraq, Kuwait, Bahrain, Qatar, and Iran.The UAE is a...
and Brunei
Brunei
Brunei , officially the State of Brunei Darussalam or the Nation of Brunei, the Abode of Peace , is a sovereign state located on the north coast of the island of Borneo, in Southeast Asia...
.

Jollibee, the large bee mascot dressed in a blazer, shirt, and chef's hat introduced by the brand in 1980 is probably the most widely recognized character in the Philippines.

On April 13, 2008, a children's television program called Jollitown was launched by Jollibee and friends. The timing was chosen to highlight Jollibee’s 30th anniversary. Jollibee and his friends Yum the scientist, Twirlie the star performer, Hetty The chearleader and Popo the gym coach are the stars of the show, which airs Sundays, 9:30 a.m. or 8:00 on GMA Network
GMA Network
GMA Network is a major commercial television & radio network in the Philippines. GMA Network is owned by GMA Network, Inc. a publicly listed company...
. The show left GMA on November 14, 2010. On July 17, 2011, Jollitown moved to ABS-CBN
ABS-CBN
ABS–CBN Corporation is a Philippine-based media conglomerate. It is the Philippines' largest media and entertainment conglomerate. The corporation was the merger of Alto Broadcasting System which at that time owned by James Lindenberg and Antonio Quirino, and the Chronicle Broadcasting Network ...
for its 4th season every Sunday at 9 am (every Sunday). The season's concept is based on Time traveling.

Jollibee has won many accolades. It has consistently been mentioned as one of the Philippines' and Asia's most admired companies in surveys conducted by publications such as Asian Business Magazine and The Asian Wall Street Journal and has received other plaudits from Euromoney and Asia Money. In 2008, it was also the recipient of the FMCG and F & B Asia Pacific Supply Chain Excellence Award at the SCM Logistics Excellence Awards.