On September 26, 1948, Ben-Gurion told his cabinet
Provisional government of Israel
The provisional government of Israel was the temporary cabinet which governed Israel from shortly before independence until the formation of the first government in March 1949 following the first Knesset elections in January that year....
that if fighting should be renewed in the north, then the Galilee
Galilee
Galilee , is a large region in northern Israel which overlaps with much of the administrative North District of the country. Traditionally divided into Upper Galilee , Lower Galilee , and Western Galilee , extending from Dan to the north, at the base of Mount Hermon, along Mount Lebanon to the...
would become "clean" [naki] and "empty" [reik] of Arabs, and implied that he had been assured of this by his generals. 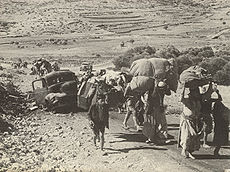 The operation was launched on the night of 28/29 October 1948, fielding four IDF brigades, the Seventh, Carmeli Brigade
Barak Armored Brigade
The 188th "Barak" Armored Brigade is an Israeli armored brigade, subordinate to Israel's Northern Regional Command. The symbol of the Barak Armor Brigade is a shield with a red border bearing a sword against a blue and white background featuring the Haifa coastline background and a sword on it...
, Golani
Golani Brigade
The Golani Brigade is an Israeli infantry brigade that is subordinated to the 36th Division and traditionally associated with the Northern Command. Its symbol is a green tree on a yellow background, and its soldiers wear a brown beret. It is one of the most highly decorated infantry units in the...
, and the Oded Brigade
Oded Brigade
The Oded Brigade was an Israeli infantry brigade, one of ten brigades fielded by the Haganah . It was headquartered in Jerusalem...
. The operational order was "to destroy the enemy in the central Galilee "pocket", to occupy the whole of the Galilee and to establish the defense line on the country´s northern border." On October 29, Weitz
Yosef Weitz
Yosef Weitz was the director of the Land and Afforestation Department of the Jewish National Fund. From the 1930s, Weitz played a major role in acquiring land for the Yishuv, the pre-state Jewish community in Palestine.-Biography:...
, learning about the start of the operation, sent Yigael Yadin
Yigael Yadin
Yigael Yadin on 21 March 1917, died 28 June 1984) was an Israeli archeologist, politician, and the second Chief of Staff of the Israel Defense Forces.-Early life and military career:...
a note urging that the army should expel the "refugees" from the newly conquered areas.

The Ground offensive was preceded by bombing raids targeting Tarshiha, Jish
Jish
Jish is an Arab town located on the northeastern slopes of Mt. Meron, north of Safed, in Israel's North District. The population is predominantly Maronite Christian and Greek Catholic with a Muslim minority....
and Sa'sa from the 22 October, using B-17s and C-47
C-47 Skytrain
The Douglas C-47 Skytrain or Dakota is a military transport aircraft that was developed from the Douglas DC-3 airliner. It was used extensively by the Allies during World War II and remained in front line operations through the 1950s with a few remaining in operation to this day.-Design and...
s (converted for bombing role). The heaviest night of bombing was 29/30 October when 13 missions dropped 21 tons of bombs on the seven villages. The bombardment of Tarshiha triggered the mass flight after 24 of the inhabitants were killed and approximately 60 were buried under rubble.

The initial thrust was carried out by the Seventh Brigade advancing from Safad. The Seventh Brigade occupied Qaddita
Qaddita
Qaddita was a Palestinian Arab village of 240, located northwest of Safad. It was captured and depopulated in the 1948 Arab-Israeli War, with some of its inhabitants fleeing to nearby Akbara where they live as internally displaced Palestinians and others to refugee camps in Lebanon or...
on 29 October, Meirun and then Safsaf
Safsaf
Safsaf was a Palestinian village located 9 kilometres northwest of Safed, present day Israel. Its villagers fled to Lebanon after the Safsaf massacre in October 1948, during the 1948 Arab-Israeli war.-History:The village was called Safsofa in Roman times...
and Jish. In the 79th Battalion's report, the battles for Safsaf and Jish were described as "difficult" and "cruel" (achzari). One IDF report said "150-200" Arabs, "including a number of civilians" died in the battle for Jish, while after Safsaf had been captured, brigades committed the Safsaf massacre
Safsaf massacre
The Safsaf massacre occurred on October 29, 1948, when the Israel Defense Forces captured the Palestinian Arab village of Safsaf in the Galilee...
,

From Jish, the 72nd and 79th battalions then turned west to take Sa'sa. After taking Sa'sa the Israeli forces then turned northwest taking Kfar Birem
Kafr Bir'im
Kafr Bir'im, also Kefr Berem , was an Arab Christian village in Palestine located south of the Lebanese border and northwest of Safed. The village was situated above sea level, with a church overlooking it at an elevation of . The church was built on the ruins of an older church destroyed in an...
, Saliha
Saliha
Saliha is one of the Seven Lebanese Villages that was later transferred to the British Mandate of Palestine. Originally part of the Jabal Amel district of South Lebanon, this term has been historically used to denote the homeland of Shi'a Muslims in Southern Lebanon...
and by the afternoon of the 30 October were at al Malikiya.

Simultaneously, the Golani Brigade engaged in diversionary tactics in the direction of the village of Illaboun. The Carmeli Brigade, which was assigned to counter attacks from Syria
Syria
Syria , officially the Syrian Arab Republic , is a country in Western Asia, bordering Lebanon and the Mediterranean Sea to the West, Turkey to the north, Iraq to the east, Jordan to the south, and Israel to the southwest....
and Lebanon
Lebanon
Lebanon , officially the Republic of LebanonRepublic of Lebanon is the most common term used by Lebanese government agencies. The term Lebanese Republic, a literal translation of the official Arabic and French names that is not used in today's world. Arabic is the most common language spoken among...
, crossed the border into Lebanon, captured 15 villages, and reached the Litani River
Litani River
The Litani River is an important water resource in southern Lebanon. The river rises in the fertile Beqaa Valley valley, west of Baalbek, and empties into the Mediterranean Sea north of Tyre. Exceeding 140 km in length, the Litani River is the longest river in Lebanon and provides an average...
.

Ceasefire was scheduled to commence at 11:00 hours, October 31, 1948. The same day, at 7:30 in the morning, Major General Moshe Carmel
Moshe Carmel
Moshe Carmel was an Israeli soldier and politician who served as Minister of Transportation for eight years.-Background:Born in Mińsk Mazowiecki in the Russian Empire , Carmel emigrated to Mandate Palestine in 1924 when he was 13 years old. He was a founding member of kibbutz Na'an, and was...
ordered his brigades and district commanders "to continue the cleansing operations inside the Galilee". In a cable dated 10:00 hours the same day Carmel ordered his brigades and district commanders: "Do all in your power for a quick and immediate cleansing [tihur] of the conquered areas of all the hostile elements in line with the orders that have been issued[.] The inhabitants of the areas conquered should be assisted to leave." This order was apparently issued after Carmel had met with Ben-Gurion the same day.

On 31 October and 1 November 1948 the Hula massacre
Hula massacre
The Hula massacre took place between 31 October and 1 November 1948. Hula was a village in Lebanon 3 km west of Kibbutz Manara, not far from the Litani River. It was captured on October 24 by the Carmeli Brigade of the Israel Defence Forces without any resistance at all...
took place at Hula (Hule)
Hula, Lebanon
Hula is a small village in southern Lebanon on the southern side of the Litani river near the Lebanese-Israeli borders...
. The village had been captured on October 24 by the Carmeli Brigade without any resistance at all. Between 35 and 58 captured men were reportedly shot down in a house which was later blown up on top of them.

At the end of this lightning attack, Israeli forces reached the Hiram Junction, north of Safed. The siege of Manara
Manara
Manara may refer to:People with the surname Manara:* Alessandro Manara, Italian astronomer* Luciano Manara, Italian soldier* Milo Manara , Italian comic book creatorPlaces:...
was lifted, Qawuqji's army fled to Lebanon, and the roads crossing the Upper Galilee were secured. With the Galilee under Israeli control, the IDF established a defensive line along the Litani before withdrawing to the Lebanese border under the terms of the 1949 Armistice Agreements
1949 Armistice Agreements
The 1949 Armistice Agreements are a set of agreements signed during 1949 between Israel and neighboring Egypt, Lebanon, Jordan, and Syria. The agreements ended the official hostilities of the 1948 Arab-Israeli War, and established armistice lines between Israeli forces and the forces in...
.

The Israeli Air Force
Israeli Air Force
The Israeli Air Force is the air force of the State of Israel and the aerial arm of the Israel Defense Forces. It was founded on May 28, 1948, shortly after the Israeli Declaration of Independence...
bombings caused considerable damage to the villages in the area. Ilan Pappe
Ilan Pappé
Ilan Pappé is a professor with the College of Social Sciences and International Studies at the University of Exeter in the UK, director of the university's European Centre for Palestine Studies, co-director of the Exeter Centre for Ethno-Political Studies, and political activist...
gives the example of the four villages: Rama, Suhmata, Malkiyya and Kfar Bir'im. He states that out of the four 'the only village to remain intact was Rama. The other three were occupied and destroyed'. Very few villagers were allowed to stay in their homes and many were imprisoned or expelled to Lebanon and elsewhere. Ilan Pappe claims that the 'Hebrew noun tihur (cleansing) assumed new meanings' during this time period. He argues that although 'it still described, as before, the total expulsion and destruction of a village, it could now also represent other activities, such as selective search and expulsion operations'.

Around 10 massacres occurred during this operation.

According to Morris
Benny Morris
Benny Morris is professor of History in the Middle East Studies department of Ben-Gurion University of the Negev in the city of Be'er Sheva, Israel...
, the atrocities committed during Operation Hiram clearly embarrassed the IDF and Israeli officials who were soon forced to respond to Arab and UN charges in various forums. The main official Israeli response was a flat or qualified denial that atrocities had taken place.