Encyclopedia
Al-Nabi Rubin was a Palestinian
Palestinian people
The Palestinian people, also referred to as Palestinians or Palestinian Arabs , are an Arabic-speaking people with origins in Palestine. Despite various wars and exoduses, roughly one third of the world's Palestinian population continues to reside in the area encompassing the West Bank, the Gaza...
village located 28 kilometers northeast of Acre
Acre, Israel
Acre , is a city in the Western Galilee region of northern Israel at the northern extremity of Haifa Bay. Acre is one of the oldest continuously inhabited sites in the country....
.
Al-Nabi Rubin students used to attend school in the nearby village of Tarbikha
Tarbikha
Tarbikha is a former Palestinian village. It was located 27 km northeast of Acre in the British Mandate District of Acre that was captured and depopulated by the Israel Defence Force during the 1948 Arab-Israeli war.-History:...
.

In the late nineteenth century, Al-Nabi Rubin was described as a small village located on a hilltop, around a tomb, or "Neby". There were about 90 Muslim
Muslim
A Muslim, also spelled Moslem, is an adherent of Islam, a monotheistic, Abrahamic religion based on the Quran, which Muslims consider the verbatim word of God as revealed to prophet Muhammad. "Muslim" is the Arabic term for "submitter" .Muslims believe that God is one and incomparable...
villagers. Arable land, fig
Common fig
The Common fig is a deciduous tree growing to heights of up to 6 m in the genus Ficus from the family Moraceae known as Common fig tree. It is a temperate species native to the Middle East.-Description:...
and olive
Olive
The olive , Olea europaea), is a species of a small tree in the family Oleaceae, native to the coastal areas of the eastern Mediterranean Basin as well as northern Iran at the south end of the Caspian Sea.Its fruit, also called the olive, is of major agricultural importance in the...
trees surrounded the village. Two cistern
Cistern
A cistern is a waterproof receptacle for holding liquids, usually water. Cisterns are often built to catch and store rainwater. Cisterns are distinguished from wells by their waterproof linings...
s and a "birket" was also near. 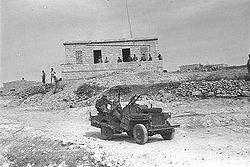 The village was captured by Israel
Israel
The State of Israel is a parliamentary republic located in the Middle East, along the eastern shore of the Mediterranean Sea...
as a result of the Haganah
Haganah
Haganah was a Jewish paramilitary organization in what was then the British Mandate of Palestine from 1920 to 1948, which later became the core of the Israel Defense Forces.- Origins :...
's offensive, Operation Hiram
Operation Hiram
Operation Hiram was a military operation conducted by the Israel Defense Forces during the 1948 Arab-Israeli War. It was led by General Moshe Carmel, and aimed at capturing the upper Galilee region from the Arab Liberation Army forces led by Fawzi al-Qawuqji and a Syrian battalion...
during the 1948 Arab-Israeli War
1948 Arab-Israeli War
The 1948 Arab–Israeli War, known to Israelis as the War of Independence or War of Liberation The war commenced after the termination of the British Mandate for Palestine and the creation of an independent Israel at midnight on 14 May 1948 when, following a period of civil war, Arab armies invaded...
and was mostly destroyed with the exception of its shrine. Al-Nabi Rubin inhabitants were expelled to Lebanon
Lebanon
Lebanon , officially the Republic of LebanonRepublic of Lebanon is the most common term used by Lebanese government agencies. The term Lebanese Republic, a literal translation of the official Arabic and French names that is not used in today's world. Arabic is the most common language spoken among...
in two waves, the aged and infirm were the last to depart when the IDF trucked them to the Lebanese border.

A shrine thought to be dedicated to the prophet Rubin
Rubin
Rubin can refer to the following people:Surnames* Alan Rubin, American musician* Andrejs Rubins* Arthur Rubin , American mathematician...
is the only original structure that remains on former village's lands.