Encyclopedia
The 188th "Barak" Armored Brigade is an Israel
Israel
The State of Israel is a parliamentary republic located in the Middle East, along the eastern shore of the Mediterranean Sea...
i armored brigade, subordinate to Israel's Northern Regional Command. The symbol of the Barak Armor Brigade is a shield with a red border bearing a sword against a blue and white background featuring the Haifa
Haifa
Haifa is the largest city in northern Israel, and the third-largest city in the country, with a population of over 268,000. Another 300,000 people live in towns directly adjacent to the city including the cities of the Krayot, as well as, Tirat Carmel, Daliyat al-Karmel and Nesher...
coastline background and a sword on it. The brigade has a long history and was part of the Yishuv
Yishuv
The Yishuv or Ha-Yishuv is the term referring to the body of Jewish residents in Palestine before the establishment of the State of Israel...
's forces in Palestine
Palestine
Palestine is a conventional name, among others, used to describe the geographic region between the Mediterranean Sea and the Jordan River, and various adjoining lands....
before the foundation of the state of Israel.

In the mid-1990s the brigade was the first to adopt the Merkava
Merkava
The Merkava is a main battle tank used by the Israel Defense Forces. The tank began development in 1974 and was first introduced in 1978. Four main versions of the tank have been deployed. It was first used extensively in the 1982 Lebanon War...
mark-III main battle tank, phasing out its older Centurion tank
Centurion tank
The Centurion, introduced in 1945, was the primary British main battle tank of the post-World War II period. It was a successful tank design, with upgrades, for many decades...
s. 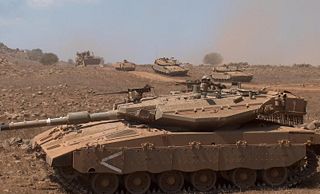 The brigade was formed as the 2nd Brigade during the 1948 Arab-Israeli war
1948 Arab-Israeli War
The 1948 Arab–Israeli War, known to Israelis as the War of Independence or War of Liberation The war commenced after the termination of the British Mandate for Palestine and the creation of an independent Israel at midnight on 14 May 1948 when, following a period of civil war, Arab armies invaded...
, when it was split off from the Levanoni Brigade. Named the Carmeli Brigade because it was led by Moshe Carmel
Moshe Carmel
Moshe Carmel was an Israeli soldier and politician who served as Minister of Transportation for eight years.-Background:Born in Mińsk Mazowiecki in the Russian Empire , Carmel emigrated to Mandate Palestine in 1924 when he was 13 years old. He was a founding member of kibbutz Na'an, and was...
, the brigade was an infantry
Infantry
Infantrymen are soldiers who are specifically trained for the role of fighting on foot to engage the enemy face to face and have historically borne the brunt of the casualties of combat in wars. As the oldest branch of combat arms, they are the backbone of armies...
formation operating in the northern Palestine. It played an important part in Operation Hiram
Operation Hiram
Operation Hiram was a military operation conducted by the Israel Defense Forces during the 1948 Arab-Israeli War. It was led by General Moshe Carmel, and aimed at capturing the upper Galilee region from the Arab Liberation Army forces led by Fawzi al-Qawuqji and a Syrian battalion...
. After IDF
Israel Defense Forces
The Israel Defense Forces , commonly known in Israel by the Hebrew acronym Tzahal , are the military forces of the State of Israel. They consist of the ground forces, air force and navy. It is the sole military wing of the Israeli security forces, and has no civilian jurisdiction within Israel...
was formed, the Carmeli Brigade became its 18th Brigade.

During the Sinai Campaign of 1956, the brigade was stationed along the Jordanian border, in case the Jordanians decided to open a second front, and was thus not involved in combat.

It was shortly later assigned armored units to become the 45th Armored Brigade, also known as the "Barak Armored Brigade". It consisted of one tank battalion, two armored infantry battalions, a mortar battalion and reconnaissance units. The changeover was completed in 1962.

During the Yom Kippur War
Yom Kippur War
The Yom Kippur War, Ramadan War or October War , also known as the 1973 Arab-Israeli War and the Fourth Arab-Israeli War, was fought from October 6 to 25, 1973, between Israel and a coalition of Arab states led by Egypt and Syria...
, it played an important role defending Israel's border against Syria
Syria
Syria , officially the Syrian Arab Republic , is a country in Western Asia, bordering Lebanon and the Mediterranean Sea to the West, Turkey to the north, Iraq to the east, Jordan to the south, and Israel to the southwest....
's attack in the southern Golan Heights. 112 soldiers were killed in action, including the brigade commander. The brigade was almost completely destroyed. The main Syrian attack at 14:30-14:50 PM, confronted by the newly positioned 74th Tank Battalion, under the command of Lt.Col. Yair Nafshi. Nafshi moved his battalion position 1.5 km forward from its previous defensive position, a maneuver that saved his men and machines from the Syrian artilerry barrage. His was the only remaining tank force, equipped with 36 Israeli modified Centurion tanks to fight the Syrians for 3 continuous days, until enforcements and reserves were moved into positions. His battalion was reinforced with a tanks company from the 53rd battalion. After 4 days of fighting, his battalion was reduced to 5 operational tanks. More than 102 soldiers and officers died defending the southern Golan Line, from reinforced points (bunkers) 107 to 114. For his gallant, professional and courageous behavior during the war, Yair Nafshi received Israel's second highest decoration, the Medal of Valor. He retired from the army with the rank of Brigadier General.

During the battle, Lieutenant Zvika Greengold
Zvika Greengold
Zvi "Zvika" Greengold is a national hero in Israel who fought during the 1973 Yom Kippur War as an Israeli IDF tank commander. He is one of only eight people who fought in the war to be awarded the Medal of Valor, the nation's highest medal for heroism....
, who had arrived unattached to any unit, fought off attacks with his single tank until help arrived. "For the next 20 hours, Zvika Force, as he came to be known on the radio net, fought running battles with Syrian tanks—sometimes alone, sometimes as part of a larger unit, changing tanks half a dozen times as they were knocked out. He was wounded and burned but stayed in action and repeatedly showed up at critical moments from an unexpected direction to change the course of a skirmish."
After the war, command and the job of rebuilding the brigade was assigned to Yonatan Netanyahu.
In the 1982 Lebanon War
1982 Lebanon War
The 1982 Lebanon War , , called Operation Peace for Galilee by Israel, and later known in Israel as the Lebanon War and First Lebanon War, began on 6 June 1982, when the Israel Defense Forces invaded southern Lebanon...
, it fought in Beirut
Beirut
Beirut is the capital and largest city of Lebanon, with a population ranging from 1 million to more than 2 million . Located on a peninsula at the midpoint of Lebanon's Mediterranean coastline, it serves as the country's largest and main seaport, and also forms the Beirut Metropolitan...
and participated in the capture of the local airport.


List of Carmeli Brigade operations in the 1948 Arab-Israeli war


List of villages and town battles the Carmeli Brigade fought