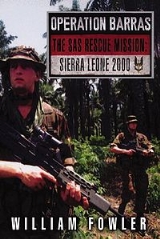 Encyclopedia
Operation Barras was the name given to a hostage rescue operation by the British
British people
The British are citizens of the United Kingdom, of the Isle of Man, any of the Channel Islands, or of any of the British overseas territories, and their descendants...
Special Air Service
Special Air Service
Special Air Service or SAS is a corps of the British Army constituted on 31 May 1950. They are part of the United Kingdom Special Forces and have served as a model for the special forces of many other countries all over the world...
, Special Boat Service
Special Boat Service
The Special Boat Service is the special forces unit of the British Royal Navy. Together with the Special Air Service, Special Reconnaissance Regiment and the Special Forces Support Group they form the United Kingdom Special Forces and come under joint control of the same Director Special...
, and Parachute Regiment in Sierra Leone
Sierra Leone
Sierra Leone , officially the Republic of Sierra Leone, is a country in West Africa. It is bordered by Guinea to the north and east, Liberia to the southeast, and the Atlantic Ocean to the west and southwest. Sierra Leone covers a total area of and has an estimated population between 5.4 and 6.4...
on 10 September 2000. The men on the ground nicknamed the dangerous mission 'Operation Certain Death'.

On August 25, 2000, members of the British Army
British Army
The British Army is the land warfare branch of Her Majesty's Armed Forces in the United Kingdom. It came into being with the unification of the Kingdom of England and Scotland into the Kingdom of Great Britain in 1707. The new British Army incorporated Regiments that had already existed in England...
's Royal Irish Regiment led by Major Alan Marshall and their Sierra Leone Army liaison officer, Lieutenant Musa Bangura were on a vehicular patrol in the Occra Hills. At the time, the area was infamous for being sightings of attacks, banditry, and kidnappings.
The patrol was ambushed, surrounded, and forced to surrender. The eleven-man-patrol was taken prisoner and held hostage by an armed rebel group known as the West Side Boys
West Side Boys
The West Side Boys aka West Side Niggaz or West Side Junglers, were an armed group in Sierra Leone, sometimes described as a splinter faction of the Armed Forces Revolutionary Council....
led by then, 24 year old Foday Kallay
Foday Kallay
Foday Kallay was the leader of an armed group, the West Side Boys, in war-torn Sierra Leone. Foday Kallay was formerly a corporal in the Sierra Leone Army.-Hostage:...
.
Some controversy exists regarding the mission of the British troops; British sources initially maintained that the soldiers were returning to Freetown
Freetown
Freetown is the capital and largest city of Sierra Leone, a country in West Africa. It is a major port city on the Atlantic Ocean located in the Western Area of the country, and had a city proper population of 772,873 at the 2004 census. The city is the economic, financial, and cultural center of...
from a meeting with Jordanian United Nations forces when they were captured. However, the Nigerian UN commander, General Garba, claims that the British soldiers never met with the Jordanian troops. British authorities later admitted that their soldiers may have been captured while deep in rebel territory.

On 3 September, five of the eleven British soldiers were released in exchange for a satellite phone
Satellite phone
A satellite telephone, satellite phone, or satphone is a type of mobile phone that connects to orbiting satellites instead of terrestrial cell sites...
and medical supplies. Further negotiations then broke down and Foday Kallay threatened to kill the remaining hostages. It was then that British Prime Minister Tony Blair
Tony Blair
Anthony Charles Lynton Blair is a former British Labour Party politician who served as the Prime Minister of the United Kingdom from 2 May 1997 to 27 June 2007. He was the Member of Parliament for Sedgefield from 1983 to 2007 and Leader of the Labour Party from 1994 to 2007...
authorised the mission.

At 6:16 a.m. local time on 10 September, three Chinook and three Lynx
Westland Lynx
The Westland Lynx is a British multi-purpose military helicopter designed and built by Westland Helicopters at its factory in Yeovil. Originally intended as a utility craft for both civil and naval usage, military interest led to the development of both battlefield and naval variants...
helicopters took off from the Freetown airport and headed for Rokel Creek, upon the banks of which was located the West Side Boys' camp. On the northern bank was the village of Geberi Bana, where the remaining British soldiers were being kept. On the opposite bank were two more villages, Magbeni and Forodugu, also occupied by the rebels. The Land Rovers
Land Rover Wolf
The Land Rover Wolf is a military utility vehicle in service with UK Armed Forces and the Dutch Marine Corps. The vehicle is famous for being the primary utility vehicle of the British Army....
used by the captured soldiers had been taken to Magbeni.

The attack on the rebel camps commenced at around 6:30 as the helicopters came in and disgorged troops almost simultaneously on both northern and southern target locations. In Geberi Bana, SAS observation teams, which had been inserted days before and had kept the rebels under surveillance
Surveillance
Surveillance is the monitoring of the behavior, activities, or other changing information, usually of people. It is sometimes done in a surreptitious manner...
ever since, began to engage them. The rescuers, SAS troopers, extracted the remaining six British soldiers and the Sierra Leonean Officer, Lieutenant Musa Bangura, within twenty minutes. They were flown out to the RFA Sir Percivale moored in Freetown harbour at about 7:00 that morning. In Magbeni, the Paratroopers engaged the awakened rebels. A second wave soon brought the Paras to full strength as they continued the assault. This attack diverted attention from the rescue mission on the opposite bank in Geberi Bana. Most of the action was over by 8:00, although the last British troops pulled out at 14:00 in the afternoon, after conducting mopping-up operations that saw the capture of Foday Kallay
Foday Kallay
Foday Kallay was the leader of an armed group, the West Side Boys, in war-torn Sierra Leone. Foday Kallay was formerly a corporal in the Sierra Leone Army.-Hostage:...
and the recovery of the Land Rovers.
One SAS member, Bombardier Brad Tinnion, was killed in the operation, and eight paratroopers and four SAS were wounded.

All awards were gazetted
London Gazette
The London Gazette is one of the official journals of record of the British government, and the most important among such official journals in the United Kingdom, in which certain statutory notices are required to be published...
with the date of 6 April 2001, however, some were not actually published for some time afterwards.

A 2008 TV series made by Dangerous Films featured Operation Barras. Sierra leone and SAS expert Andy Pacino featured heavily in the programme, speaking about the part the SAS played in the rescue mission. Andy's book, SAS: First Man Through The Door was banned from publication by the MoD on the grounds that it may have a "snowball effect" on other soldiers who may want to write their own books about their experiences in the Special Forces Regiment.

A 2007 episode of the Discovery Channel
Discovery Channel
Discovery Channel is an American satellite and cable specialty channel , founded by John Hendricks and distributed by Discovery Communications. It is a publicly traded company run by CEO David Zaslav...
TV show Zero Hour
Zero Hour (TV series)
Zero Hour is a Canadian/British documentary-style television program, which airs on The History Channel in the United States, History Television in Canada and on the BBC in the United Kingdom...
starring Clive Standen
Clive Standen
Clive Standen is an English actor best known for playing Sir Gawain in the Starz series Camelot as well as 'Archer', the brother of Robin Hood in the BBC TV series Robin Hood and Private Carl Harris in the British sci-fi show Doctor Who.-Acting:Standen's first experience of stunts, horse...
as Major Alan Marshall and narrated by Sean Pertwee
Sean Pertwee
Sean Pertwee is an English actor known for his television, film and voice-over work.-Career:In the early 80s, he auditioned for a place at the Surrey County Youth Theatre where he was cast as Captain Fitzpatrick in the play Tom Jones, based on the novel by Henry Fielding...
documented the whole operation from the view point of all involved and included interviews with soldiers and West Side Boys
West Side Boys
The West Side Boys aka West Side Niggaz or West Side Junglers, were an armed group in Sierra Leone, sometimes described as a splinter faction of the Armed Forces Revolutionary Council....
involved.

On 20 August 2000, the Australian Broadcasting Corporation
Australian Broadcasting Corporation
The Australian Broadcasting Corporation, commonly referred to as "the ABC" , is Australia's national public broadcaster...
's (ABC-TV) international affairs programme Foreign Correspondent broadcast a special report, "Sierra Leone: Soldiers of Fortune", focussing on the exploits of South African pilot Neall Ellis and his MI-24 Hind gunship. The report also investigated the failures of the UN Peacekeeping Force, and the involvement of mercenaries/private military contractors in providing vital support to UN operations and British military Special Operations in Sierra Leone in 1999-2000. The programme also featured interviews with and film of the Royal Irish Regiment contingent in Sierra Leone training members of the SLA in the weeks leading up to the incident.