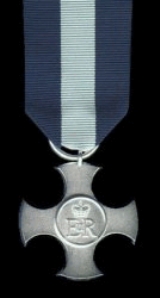 The DSC, which may be awarded posthumously, is granted in recognition of "... gallantry during active operations against the enemy at sea."

The award was originally created in 1901 as the Conspicuous Service Cross, for award to warrant and junior officers ineligible for the DSO
Distinguished Service Order
The Distinguished Service Order is a military decoration of the United Kingdom, and formerly of other parts of the British Commonwealth and Empire, awarded for meritorious or distinguished service by officers of the armed forces during wartime, typically in actual combat.Instituted on 6 September...
. It was renamed the Distinguished Service Cross in October 1914, eligibility being extended to all naval officers (commissioned and warrant) below the rank of Lieutenant Commander
Lieutenant Commander
Lieutenant Commander is a commissioned officer rank in many navies. The rank is superior to a lieutenant and subordinate to a commander...
. In 1931, the award was made available to members of the Merchant Navy and in 1940 eligibility was further extended to non-naval personnel (British Army
British Army
The British Army is the land warfare branch of Her Majesty's Armed Forces in the United Kingdom. It came into being with the unification of the Kingdom of England and Scotland into the Kingdom of Great Britain in 1707. The new British Army incorporated Regiments that had already existed in England...
and Royal Air Force
Royal Air Force
The Royal Air Force is the aerial warfare service branch of the British Armed Forces. Formed on 1 April 1918, it is the oldest independent air force in the world...
) serving aboard a British vessel. Since the 1993 review of the honours system, as part of the drive to remove distinctions of rank in awards for bravery, the Distinguished Service Medal, formerly the third level decoration for ratings, has been discontinued. The DSC now serves as the third level award for gallantry at sea for all ranks.

Since 1916, bars have been awarded to the DSC in recognition of the performance of further acts of gallantry meriting the award. Recipients are entitled to the postnominal letters DSC.