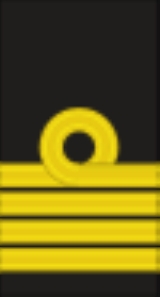 Captain is a senior officer rank of the Royal Navy
Royal Navy
The Royal Navy is the naval warfare service branch of the British Armed Forces. Founded in the 16th century, it is the oldest service branch and is known as the Senior Service...
. It ranks above Commander
Commander
Commander is a naval rank which is also sometimes used as a military title depending on the individual customs of a given military service. Commander is also used as a rank or title in some organizations outside of the armed forces, particularly in police and law enforcement.-Commander as a naval...
and below Commodore
Commodore (Royal Navy)
Commodore is a rank of the Royal Navy above Captain and below Rear Admiral. It has a NATO ranking code of OF-6. The rank is equivalent to Brigadier in the British Army and Royal Marines and to Air Commodore in the Royal Air Force.-Insignia:...
and has a NATO ranking code of OF-5. The rank is equivalent to a Colonel
Colonel
Colonel , abbreviated Col or COL, is a military rank of a senior commissioned officer. It or a corresponding rank exists in most armies and in many air forces; the naval equivalent rank is generally "Captain". It is also used in some police forces and other paramilitary rank structures...
in the British Army
British Army
The British Army is the land warfare branch of Her Majesty's Armed Forces in the United Kingdom. It came into being with the unification of the Kingdom of England and Scotland into the Kingdom of Great Britain in 1707. The new British Army incorporated Regiments that had already existed in England...
or Royal Marines
Royal Marines
The Corps of Her Majesty's Royal Marines, commonly just referred to as the Royal Marines , are the marine corps and amphibious infantry of the United Kingdom and, along with the Royal Navy and Royal Fleet Auxiliary, form the Naval Service...
and to a Group Captain
Group Captain
Group captain is a senior commissioned rank in the Royal Air Force and the air forces of many other Commonwealth countries. It ranks above wing commander and immediately below air commodore...
in the Royal Air Force
Royal Air Force
The Royal Air Force is the aerial warfare service branch of the British Armed Forces. Formed on 1 April 1918, it is the oldest independent air force in the world...
. The rank of Group Captain is based on the Royal Navy rank. Sometimes the rank is described as Captain RN to distinguish it from the more junior army rank.

In the Royal Navy, the officer in command of any ship is considered the captain even if that officer holds a different rank. Royal Navy officers who rank as captains may serve on ships or on land in naval bases or other service establishments.